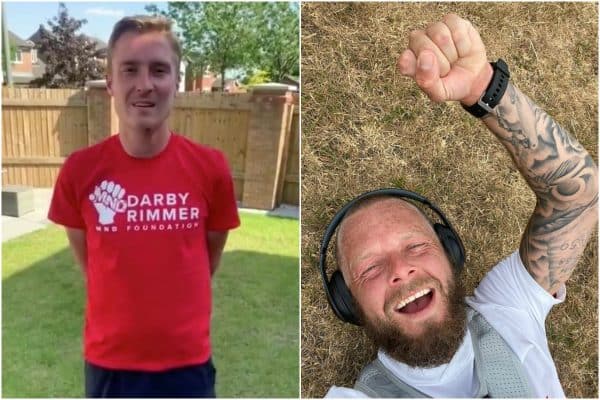 A charity drive to cover 100km in the month of May has been completed by a host of ex-Liverpool players among many others, raising funds for the Darby Rimmer MND Foundation.

MND is a degenerative disease that has already left Darby’s close friend Chris Rimmer wheelchair-bound, and at this stage there is no known cause and no cure.

The foundation is aimed at raising awareness for the disease, which has a one-in-300 lifetime risk in the UK, and during lockdown the ‘100k in May’ initiative was brought in to raise funds.

Many of Darby’s former team-mates from spells with Liverpool, Bradford and Bolton have taken part, along with other staff members, friends and members of the public.

And with June upon us, those who were able to cover the distance have marked their successful endeavour, with Jay Spearing among those to complete the challenge.

The ex-Liverpool midfielder shared his progress after breaking the 100km barrier, having run 106km in just under eight hours over the course of the month:

That’s a wrap! ??? ?
One hell of a session to finish my 100km in May challenge!
I can’t thank everyone enough for the donations – it’s made the effort worthwhile!
And please keep supporting this special foundation @DarbyRimmerMND #AttackMND pic.twitter.com/mC6YcbzibE

Spearing has raised over £3,300 for the Darby Rimmer MND Foundation so far via his JustGiving page, including a donation from his old team-mate Daniel Sturridge.

They were joined by the likes of the Women’s Super League referees, the FA Women’s technical staff and a group of journalists including former This Is Anfield writer Emma Sanders.

Rimmer himself covered the 100km on his wheelchair-adapted bike, and on completion said “it’s been a pleasure to take part with the hundreds of other team members, all in support of the Darby Rimmer MND Foundation.”

“I will never give into this disease out of pure spite and determination for what it has physically done to my body,” he continued.

“I won’t let it beat me mentally, and I’ll keep fighting and pushing. So let’s keep going and attacking MND together.”

As the dust settles on a phenomenal 100K In May challenge, Chris and Stephen would like to say a huge thank you to everyone that took part and for your incredible generosity.

In a video message on the Darby Rimmer MND Foundation’s Twitter page, Darby thanked those supporting the cause after finishing his own 100k.

“It’s been a pleasure to be part of such a special team,” the 31-year-old said.

“You’ve all raised so much awareness for MND, and all the money that you’ve raised will help make a huge difference in the lives of those battling the disease.

“So to everyone who has taken part, thank you and well done.”

* To learn more about Motor Neurone Disease and the Darby Rimmer MND Foundation, visit their website here, and you can donate to the cause through their JustGiving page here.