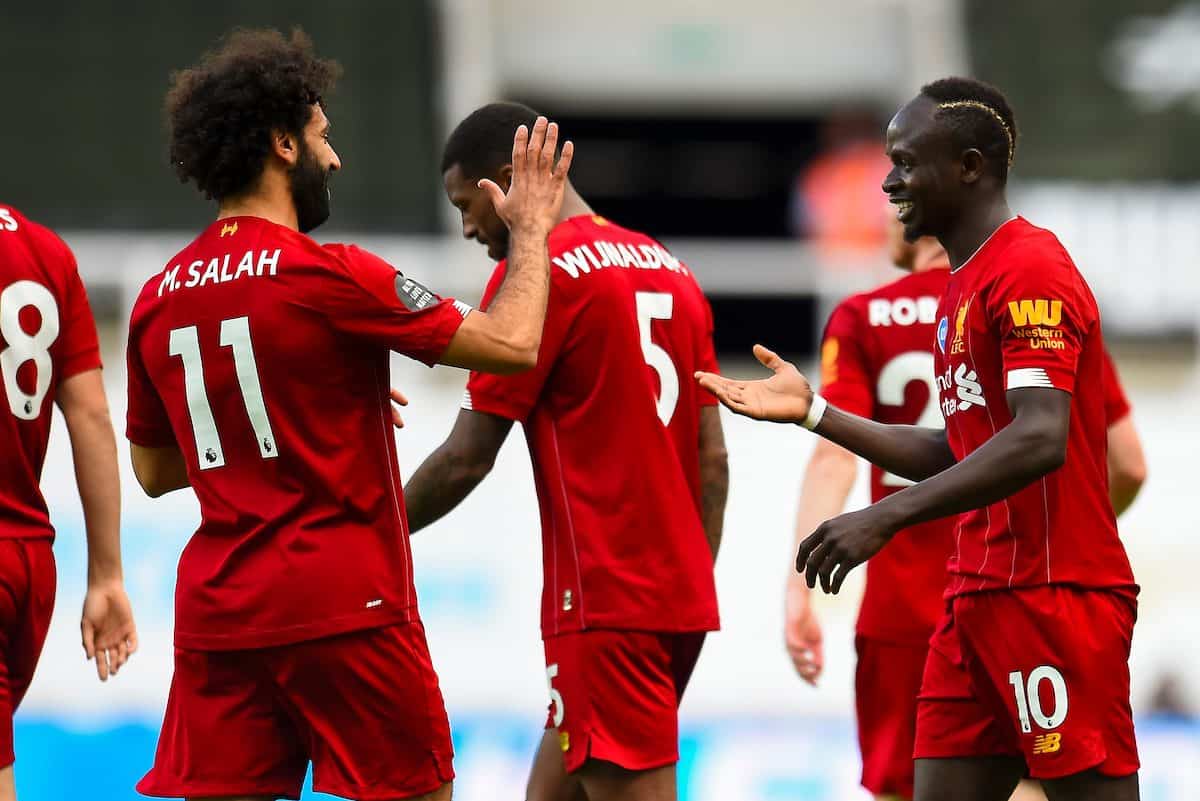 Liverpool ended a wonderful 2019/20 season with a 3-1 win away to Newcastle on Sunday, meaning they finish with a club-record 99 points.

Jurgen Klopp‘s side made a disastrous start, with Dwight Gayle opening the scoring after just 24 seconds, suggesting another hungover-looking performance would occur.

Liverpool were easily the better side, however, and Virgil van Dijk sent an inch-perfect header into the net as half-time approached.

Divock Origi fired a brilliant strike past Martin Dubravka to put the Reds in front close to the hour mark, prior to Mohamed Salah, Sadio Mane and Roberto Firmino all being introduced.

And it was Mane who completed the scoring, bending home a finish in trademark fashion to secure all three points.

A remarkable ninety-nine points was lauded by many…

I’ve quit Football Manager saves because I was bored of the save for being too easy because I’ve reached 99 points.

What Liverpool are doing, without a huge net spend, is ridiculous

“99 points and joint win record, would definitely have been better had the break not happened” – shankly96 on the forums.

What an incredible season!!

99 points on the back of a 97 point season is quite magnificent.

196 points in the last two seasons is just insane. A relentless machine Klopp has created. Long may it continue ??#LFC

Keita’s Man of the Match performance caught the eye…

Another man of the match for Keita. Special player.

Keita was good again. Less so than in other games, but still solid

Naby Keita with a well deserved man of the match, brilliant again today, defensively now it’s like night and day compared to last season, maybe less exciting but still manages to offer something else to the attack .

I’ve just watched a Naby Keita workhouse performance with a lot of tech…what a player.

Origi was more divisive, however, despite his goal…

Divock Origi's ability to score goals – great ones, important ones, how-on-earth-did-he-do-that? ones – without doing little else but frustrate is incredible. #NUFC 1-2 #LFC

“Div is every bit as frustrating as a teenage crush” – shankly96 on the forums.

Divock Origi waiting for Twitter to point out how bad he’s been before lashing one in.

Virgil Van Dijk’s voice is bellowing all around St James’s Park, frustrated with how Liverpool are playing. Divock Origi has just been on the end of his booming displeasure, failing to press or hassle. It’s been an inauspicious 30 minutes for Origi.

If someone asked me how I would describe Origi’s Liverpool career, it would be this @TheKopHQ @EntireDesign_ pic.twitter.com/KqXGGmgrdo

Liverpool’s brilliance throughout the season was further reflected on…

Just the 33 points separating the Premier League Champions and third-place this season, then.

The reds there absolutely taking the piss.

“Beautiful season boys. We go again.” – Iluvatar on the forums.

Jürgen Klopp's #LFC have achieved 87% of points available this season, setting a new record for their 19 top-flight title winning seasons, surpassing the clubs' previous record of 81% of points, which were won during the 1978/79 multiple record-breaking season.

In a year we’d maybe rather forget, Jurgen Klopp’s Liverpool gave us some light out of the darkness, an absolute pleasure to watch – and even some of the Reds’ bitterest rivals will quietly agree (I’ve heard them!)

All starts again very soon though – and we all start on zero!