The media felt Liverpool produced a fitting performance in beating Chelsea 5-3 to mark the special occasion as the Reds finally lifted the Premier League trophy.

It was a crazy and special night in equal measure as the Reds signed off an historic campaign at Anfield with a 5-3 victory before proudly lifting the trophy.

Decades worth of dreams finally became reality as Jordan Henderson delivered another glorious trophy shuffle to officially crown the new champions, who moved on to 96 points.

Here’s how the media reflected on an unforgettable evening, and indeed the most incredible of seasons for the Champions of Everything. 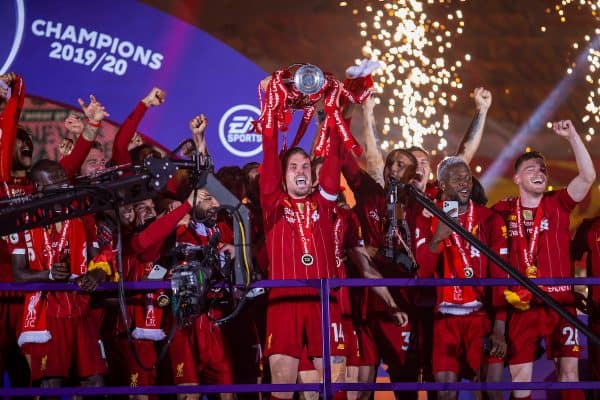 The Independent’s Melissa Reddy explained how it was a special night that finally “exorcised” all the painful near misses of bygone years:

“The ghosts of near misses past had been exorcised and this was Liverpool’s moment to soak it all in: to surround the trophy they’ve coveted for three decades and consider the scale of their achievements.”

The Telegraph‘s Chris Bascombe felt it was particularly fitting that it would Chelsea, of all teams, to witness the long-awaited title celebration:

“Mercifully for Liverpool, history’s next chapters are always in production. How poignant, then, that it should be the Londoners cast as the unwanted guests at Anfield’s first championship celebration for 30 years.”

The Liverpool Echo‘s Paul Gorst reflected on the “incredible” five-year journey under Jurgen Klopp leading to the pinnacle moment as dreams became reality:

“A generation of dreams had become reality. From doubters to believers to record-breaking, history-making achievers.

“What an incredible ride Jurgen Klopp has taken this team on these past five years. This was the zenith of it all.”

The Mail‘s Martin Samuel lauded how Liverpool rose to the challenge this season, and labelled the Reds “one of the greatest title-winning teams in English football history”:

“What a team it has been this season. What verve, what skill, what effort, what relentlessness. They saw what Manchester City did last season, and were not daunted by it. They saw the near-impossible standard that had been set and rose to it.

“This is one of the greatest title-winning teams in English football history. Their performances will stand the test of time.”

The Mirror‘s David Maddock wrote how the Reds “stuck true to their values” with a performance that captured “the essence of this team in one game”:

“Fittingly, the Reds stuck true to their values with an audacious display of attacking prowess, delivering on Jurgen Klopp’s vow to give those watching at home something to remember this historic night by.

“It was the essence of his team in one game, a contest to see who could deliver the most spectacular moment, the most telling finale to a spectacular season.”

Analysing the display, BBC Sport’s Phil McNulty felt Liverpool’s refusal to accept anything other than victory on such a night tied in nicely with the sheer determination that drove the Reds to success:

“Once again, Liverpool refused to finish second best in a show of character and quality.

“It was a fitting way for Liverpool to round off another unbeaten league season at Anfield and the perfect set-up for those title presentation celebrations.”

Samuel commented on how it was an old-fashioned unstoppable attacking blitz which did the business, giving the Reds an unassailable lead:

“[It] was a demonstration of the might of this Liverpool team. The way they can take a game away from the opposition in a furious burst of energy. Remember how they put away Manchester City in the first half of a Champions League tie? How their sheer physicality terrified Barcelona?

“That, indeed, is why they are champions. It was the team up the road that once boasted of unleashing the dogs of war – but Liverpool have perfected the tactic. It is as if a switch is flicked and Liverpool’s hounds are released, chasing down the opposition with a terrifying collective yelp.”

ESPN’s Liam Wheeler praised the quality of Liverpool’s finishing on the night:

“Liverpool moved the ball calmly and with purpose early on, but it was three explosive finishes in 20 first-half minutes that will have delighted Jurgen Klopp on a memorable night that concluded with Jordan Henderson lifting the Premier League trophy.”

The Evening Standard‘s David Lynch was in awe of how Klopp’s side went through the gears and always raised the level when required to keep Chelsea at arms’ length:

“But sustaining such intensity across 90 minutes – never mind 38 games – is hard enough, and that is one area where the Reds are currently unrivalled.

“Every time it seemed that the visitors were in with a sniff, Klopp’s men streaked away by finding fresh fuel reserves from somewhere.” 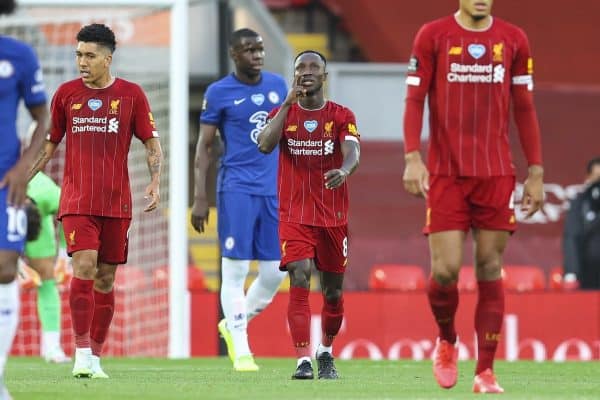 The Mail‘s Dominic King assessed Keita as the driving force behind Liverpool’s attacking show and praised the Guinean for showing such a ruthless mentality to push on:

“If Liverpool have been a little lacklustre at times in recent weeks, dropping some unexpected points, the zip and fizz was back, embodied by the superb Naby Keita; Klopp had said he was “completely in competition mode” ahead of this fixture and that attitude had rubbed off on his squad.

“Keita was signed two years ago to provide dynamism from midfield and this, really, was the first time we have seen him produce the fireworks that were on show so regularly for RB Leipzig. His goal, battered in off the underside of the Anfield Road End crossbar, was fit for the occasion.”

Karl Matchett, writing for the Independent, assessed how the No. 8 produced the “exact” display Klopp would want to see:

“Here he showed once more how he has found his groove; his first-half display was full of energy, attacking intent and, importantly, end product.

“He won the ball, surged into space and unleashed an unstoppable missile past Kepa to open the scoring—the exact traits to his game Jurgen Klopp has been wanting to see on a more regular basis.”

The Mirror‘s Freddie Keighley labelled Keita “the complete midfielder” and believes he should now feature in Liverpool’s first-choice midfield trio:

“He has flattered to deceive since his £52.75 million arrival in 2018 and that is well reported, but Keita is finally showing the consistency and quality expected of someone who wears the No. 8 jersey for the Reds.

“It’s not only in attack where he excels, either. The 25-year-old made four tackles to justify his status as the complete midfielder Liverpool were said to have signed from RB Leipzig.

“But fitness allowing, it would be no surprise to see him regularly starting next campaign.”

Going on to discuss that battle for places in midfield, Keighley also thought Gini Wijnaldum provided a reminder of his importance at a time the Reds remain linked with Thiago Alcantara:

“Wijnaldum’s fourth league goal of the campaign came at a useful time as the Dutchman reminds the Anfield faithful of his importance in midfield.

“But Wijnaldum has featured in 36 of Liverpool’s 37 league games this campaign and his tireless performances are the lifeblood of Jurgen Klopp‘s team. The Reds’ links to Bayern Munich star Thiago Alcantara will dominate the summer transfer reporting, but whether Wijnaldum will sign a new deal is also of great intrigue.”

Elsewhere, Wheeler was in awe of “another attacking masterclass” from Trent Alexander-Arnold:

“Another attacking masterclass just about outweighed a late defensive lapse.

“There was a sense of inevitability as he composed himself before hammering a delightful, trademark free-kick beyond a helpless Kepa Arrizabalaga to double his side’s lead, while his second-half cross to assist Firmino was the stuff of a centre-forward’s dreams.” 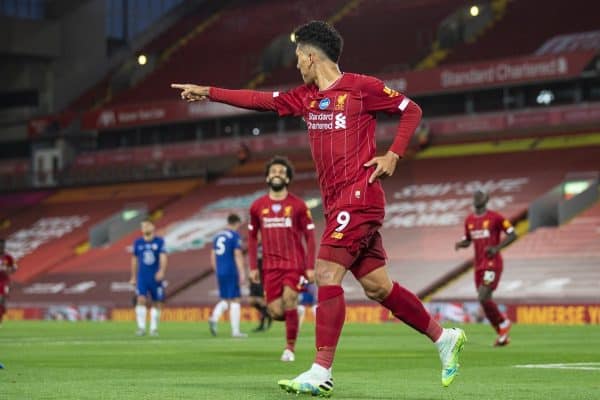 And finally, Matchett was pleased that Roberto Firmino finally broke his Anfield duck, and was even more delighted to see that the selfless Brazilian’s desire for goals still burns:

“Of course, Klopp has frequently made clear that his brilliant Brazilian is in the team for far more than scoring relentlessly; he plays a key tactical role and works tremendously hard for the team.

“But the celebrations by Firmino and the way he clearly thanked Alexander-Arnold for the assist show the truth: he’s still a forward, and he still wants to score.”