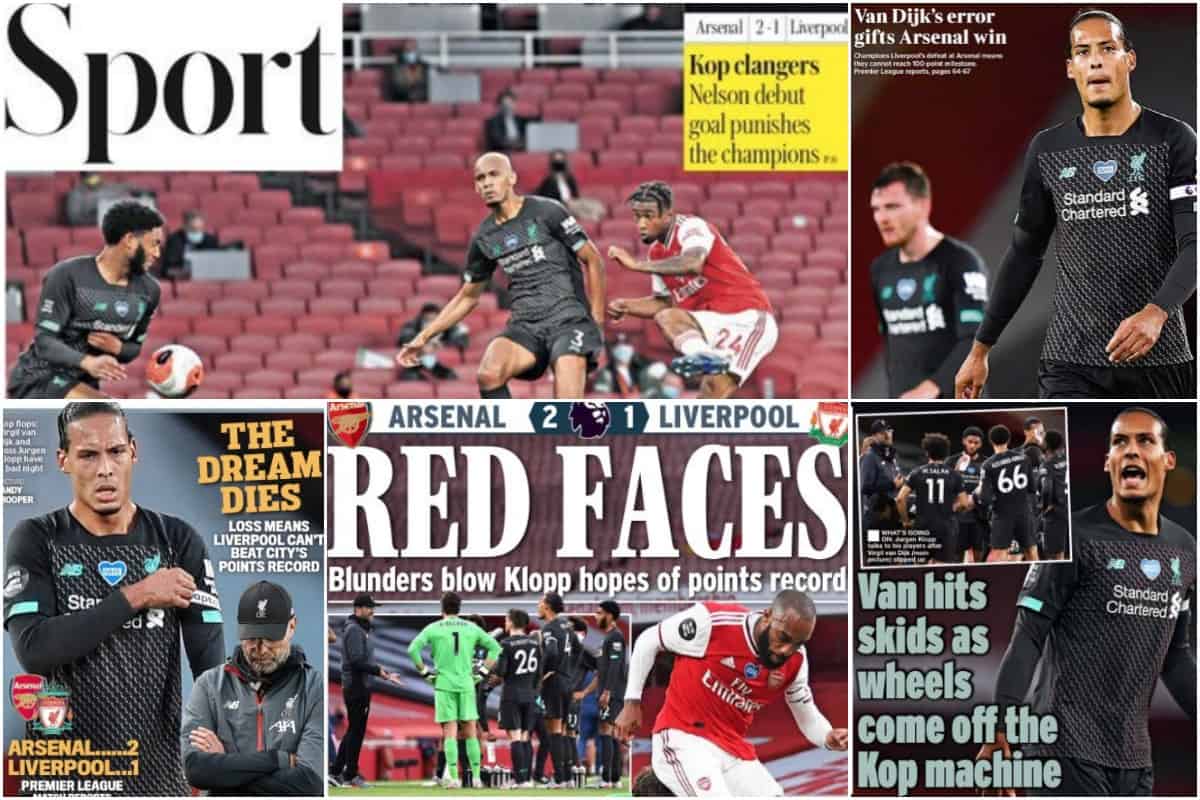 The media were shocked by Liverpool’s defensive errors in the 2-1 loss at Arsenal and feel the Reds are paying for their own supremacy in this flat end to the season.

A third Premier League defeat of the season ended the Reds’ remaining ambitions of setting a new points record.

Alexandre Lacazette and Reiss Nelson punished uncharacteristic errors in Liverpool’s defence to complete a comeback, after Sadio Mane had given Jurgen Klopp’s side the lead.

Don’t be too disheartened; the reigning champions will finally lift the Premier League trophy next time out as Chelsea arrive at Anfield.

Before that momentous occasion, here’s how the media reflected on the defeat at the Emirates Stadium.

The Mirror’s Darren Wells thinks the downturn has taken an edge off the Reds’ “flawless” season:

The Reds have been noticeably below their usual standards in recent matches, and needed a perfect finish in their final three games to better Man City‘s tally from 2017/18.

While they must still be lauded for their dominance, it does take the cherry off their otherwise flawless season.

The Guardian’s Barney Ronay feels the season’s end cannot come quickly enough, with the Reds in need of a break to refresh after such a long, draining campaign:

The Telegraph’s Jason Burt can’t help but feel that Liverpool missed an historic opportunity in passing up the chance to set a record points total when it was “easily within their grasp”:

Liverpool will claim they care little about such achievements, and why should they, but it was one that felt easily within their grasp when the season re-started.

The BBC’s Phil McNulty was more measured in has assessment, noting that it was “inevitable” that Klopp’s side would not be quite the same force after wrapping up the title:

Liverpool will be disappointed to miss out on that Premier League points record but it is almost inevitable a crucial edge would be taken off their game after securing the club’s first title in 30 years with seven games still to play.

The Mail’s Martin Samuel thinks Liverpool suffered at the hands of their own success, as winning the title so early left the Reds with too many meaningless fixtures to retain the same level of focus:

Perhaps Liverpool were just too good, their supremacy too apparent from way out.

On average, Premier League champions accrue 0.5 points per game fewer once the deed is done – and Liverpool have had further to travel with their feet up than any team in history.

Ian Doyle, for the Liverpool Echo, believes that chasing a record points tally just wasn’t that big a deal for Klopp’s side:

But it’s clear the prospect of challenging Manchester City’s record 100-point tally didn’t have quite the same lustre as bumping Pep Guardiola’s side emphatically off their perch.

Reporters were surprised at the defensive display, assessing it was like a throwback to Klopp’s early days…

Wells was in pure shock after seeing Virgil van Dijk make an error:

Pigs do fly after all.

While Burt was unimpressed by Liverpool’s “remarkable carelessness”:

It was a first-half of remarkable carelessness. No wonder Jurgen Klopp slumped in his chair, looking on disdainfully. This was not what he had come to expect.

The performance was a throwback to the side of Klopp’s first days in charge, in the view of the Independent’s Melissa Reddy:

The viewing felt like an ode to the Merseysiders before Jurgen Klopp’s transformation took shape, guiding them to a first title in three decades.

Liverpool went behind at half-time despite scoring the opener for the first time since December 2016. It was a throwback to a team that could not master game management and regularly made their missions impossible.

ESPN’s Danny Lewis assessed Joe Gomez was the only defender to impress on the night:

There will be questions asked about Liverpool’s defensive mistakes, but Gomez shouldn’t be criticised. He showed superb anticipation throughout, even saving his teammates from embarrassment at times.

Meanwhile, the Independent’s Tom Kershaw felt that if the game had something riding on it, Liverpool would have stepped up a gear:

You can’t help but feel that, if there was that extra edge to fight for, Liverpool would have found the breakthrough.

First off, the Liverpool Echo’s Paul Gorst noted that the Reds have lost their identity since taking their foot off the gas in the left-over games:

Klopp and his players are lurching through the final stages of this campaign with little desire in games devoid of passion and vigour without fans in attendance.

“Intensity is our identity,” assistant manager Pep Lijnders is famed for saying. It has been conspicuous only by its absence since the title was placed securely in the bag.

Doyle was concerned at the slack attacking display and felt it was another demonstration of how the midfield suffers without Jordan Henderson:

While this defeat is no cause for alarm, some underlying concerns remain, not least with the attacking effort that spluttered for too long and a midfield that, going forward, lacked dynamism with Jordan Henderson absent.

Neil Jones, writing for Goal.com, was alarmed at how Liverpool were so “toothless”:

At times, the ‘champions of everything’ looked a little toothless.

Meanwhile, Lewis didn’t think it was all bad, assessing that Liverpool’s pressing was excellent while Takumi Minamino’s impact was another positive:

There were large periods where Liverpool pressed really well, not allowing Arsenal to get into their passing flow or create chances.

They were dominant before the opener, while there were also massive improvements after half-time — especially when Takumi Minamino came off the bench.

Looking ahead, Standard Sport’s David Lynch believes the big worry is that this poor performance level could be carried into next season:

The flipside is that the strange conditions of this season mean the new one starts very soon, and if this hangover lasts much longer then Liverpool fans have every reason to worry about their imminent title defence.

Elsewhere, Doyle thinks Liverpool’s form since clinching the title has illustrated how incredibly the Reds performed throughout the campaign:

And the indifferent form from the Reds since clinching the championship – won with a record seven games to spare, such was their domination – has put into perspective their astonishing achievement before the season was suspended back in March.

Lynch, among others, thought Alex Oxlade-Chamberlain was the man to miss a big chance to impress and feels he needs to do more in order to earn a bigger role next season:

Unfortunately for Oxlade-Chamberlain, he simply could not capitalise, producing a sloppy performance that came to an end on the hour mark, as so many of his starts tend to.

The 26-year-old has all the tools to be a major player for Liverpool but, since his injury, has failed to consistently put them all together. If he is to play a bigger role next term after watching on from afar for much of this, he desperately needs to start showing improvement.

Doyle thought Minamino and Naby Keita both made positive impacts after coming on:

There were some glimmers, notably in the performances of second-half substitutes Takumi Minamino and Naby Keita, the latter bringing impetus, energy and a touch of vision.

And Lynch believes Klopp should use the final games now offer the ideal chance to hand more minutes to those players in preparation for next season:

However, with the possibility of surpassing 100 points now gone, surely it is time for Liverpool’s squad men to get more regular starts.

If that is the case, then the manager needs to see how big a part players such as Takumi Minamino and Naby Keita – who have been on the fringes this term – can play next time around. Both men should be in line to start the next two games.