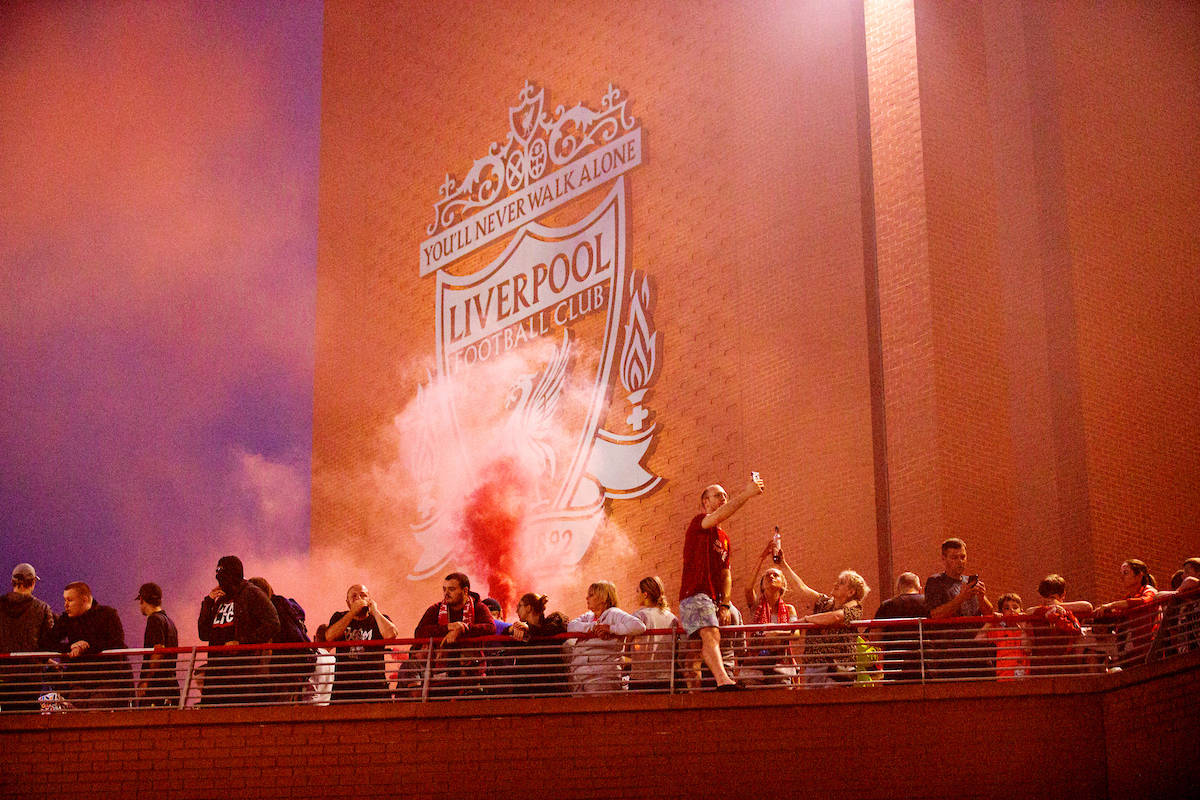 Liverpool have urged supporters to stay at home, dispelling a rumour that the players might present the trophy outside the Main Stand on Wednesday night.

The club’s long wait to get their hands on the league title will be over in over 48 hours’ time, but Liverpool have once again stressed the importance of supporting the team from home.

Fans are right to want to celebrate the remarkable and milestone achievement of Jurgen Klopp‘s side, but celebrations, in public settings, are to be put on hold while still in the midst of the pandemic.

And following the scenes at Leeds United’s home ground following their promotion and speculation on social media about similar scenes unfolding at Anfield in mid-week, club CEO Peter Moore, in a joint statement, insisted “nothing is happening outside of the stadium.”

“When the time is right, we will all come together to celebrate but, for now, we are asking fans to keep themselves and their families safe by celebrating at home,” he stressed.

The joint statement from the club, Merseyside Police, Liverpool City Council and Spirit of Shankly was one which encouraged all fans to enjoy the “special moments on screen, in the comfort of their homes.”

The clash against Chelsea and the subsequent trophy presentation which will see Sir Kenny Dalglish hand the title to Jordan Henderson will be shown by Sky Sports on their free-to-air channels to help deter large groups of supporters from congregating at Anfield and the surrounding areas.

And, as part of the statement, Matt Ashton, director of public health at Liverpool City Council said:

“This week, Liverpool Football Club will celebrate their magnificent achievements in what has undoubtedly been a standout but strange season.

“We know fans will be eager to celebrate Liverpool FC lifting the Premier League trophy but they need to do this responsibly. The coronavirus is still in circulation within our communities so it is vital that we continue to avoid large gatherings, to protect each other, our families and the NHS.

“The threat of a second lockdown is very real. Fortunately, the trophy ceremony is free to watch on TV. Hopefully, the city will be able to mark this achievement more publicly in the near future. Until then, avoid any big crowds and enjoy the Reds being crowned Premier League champions.”

With fans having shown up at Anfield following the confirmation of Liverpool’s title back in June, assistant chief constable Natalie Perischine was also eager to stress that there will be a strong police presence on the night of the game.

“We’ll have officers on duty at the ground and surrounding area and they will be supported by specialist resources including the Dog Section and mounted police. We will also have a wider city policing plan in place throughout the night, which is standard procedure,” ACC Perischine explained.

“We will also have additional measures we can introduce if necessary, including road management and Dispersal Orders, and this is again to ensure that people are kept safe and discouraged from the risks of gathering.”