Mikel Arteta believes that, despite Arsenal‘s 2-1 win on Wednesday night, the gap between his side and Liverpool is “enormous,” and used the Reds’ build as an example.

The Reds may have lost at the Emirates, but they stand as the most dominant side in the Premier League, with an 18-point lead over second-placed Man City.

Already crowned champions, Jurgen Klopp‘s side appear to have taken their foot off the gas, exemplified by rare errors from Alisson and Virgil van Dijk to gift Arsenal their victory.

Liverpool had been 1-0 up through Sadio Mane‘s strike, and looked to be coasting to a win, only for Arsenal to take their chances then hold their own to seal the result.

It has been a slow build to this point, with Klopp arriving to revitalise the club in 2015—much like Arteta did in December—and the Spaniard believes he can take lessons from how the Reds manager was able to manage it.

“You only need to look at the difference between the two teams today, the gap is enormous,” he told Sky Sports.

“The gap, in many areas, we cannot improve it in two months, but the gap between accountability, the energy, the commitment, the fight of the two teams is now equal.

“Before it was not like this, and I’m very proud of that.

“The rest will take some time, but at least we’ve got that now, and my message to the players is: with that we can create something.” 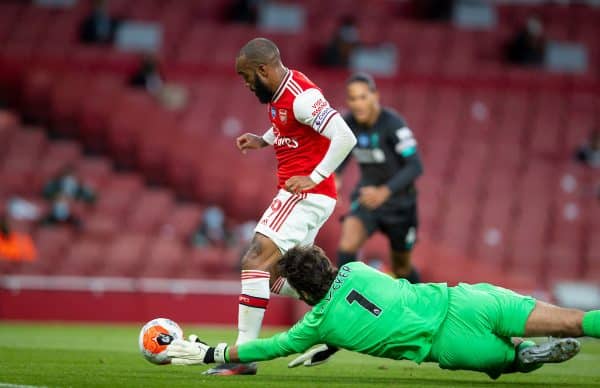 Though Van Dijk described the two goals as “presents” to Arsenal, Arteta continued to praise his side for the “belief” they showed to fight back against a side that can “nullify you.”

“I was worried after 1-0, how we were going to react,” he conceded.

“Because they are such a team with their pressing, the way they play, that they nullify you, almost, in many moments.

“We were able to pick one moment and believe again, and before I think they would have gone down and today they reacted, they said ‘we need to go for it, we know how important this game is for us’, and here is the reward.”

Though they were the fall-guys in north London, the signings of Alisson and Van Dijk, for a combined £140 million, are seen as the most transformative of Klopp’s tenure.

They put Liverpool on the map again, and it took a significant outlay to do so, regardless of it being funded by the sale of Philippe Coutinho.

Arteta, who was schooled by Pep Guardiola, believes Arsenal need a similar investment, attesting to the Reds’ spending to claim “there is no magic” to reaching the top.

“You just have to see how they build a squad, and there is no magic,” he continued.

“You need to improve with quality, quality players in the squad, and you need bigger squads to compete in this competition, and there is the challenge.”

Though it can be argued that Liverpool have achieved despite the odds, with less money than most other title-winners in the Premier League era, there are similar hallmarks in Arteta’s approach at Arsenal.

Whether they can truly emulate the Reds’ rise is another question, but he clearly believes they have at least shown the desire to do so, as Klopp’s side did in 2015/16.