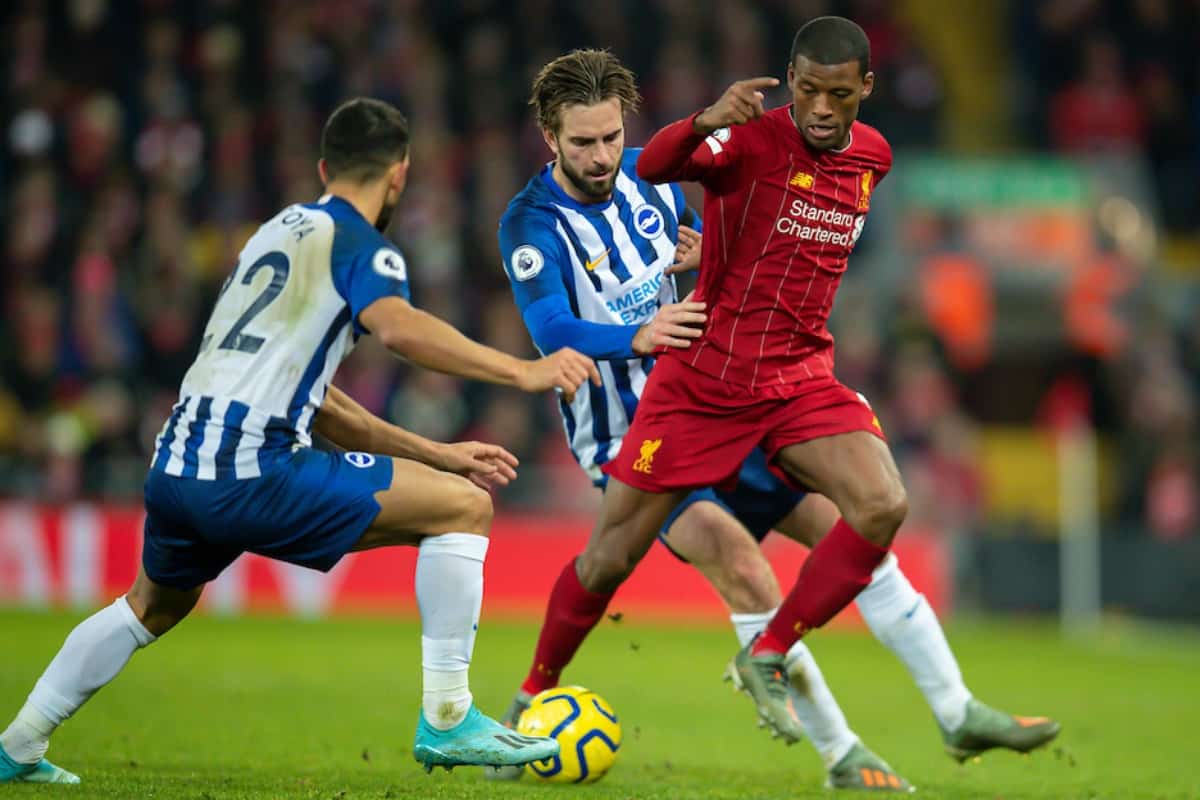 There’s a poor recent away run for Liverpool to rectify when they face Brighton in their latest Premier League fixture on Wednesday night.

Liverpool are back on the road, heading to the south coast on Tuesday and staying in a hotel overnight before they seek to secure their 30th win of what has been a landslide Premier League season.

The Reds were far from their best against Aston Villa but continued to find a way to keep the points tally ticking over as they stretched their formidable run at Anfield to 57 games unbeaten, the last 24 of which have ended in wins.

However, it is a different story away from home for Jurgen Klopp‘s Reds on recent away days as they have failed to win any of their last five in all competitions, losing four.

It’s a run of results which has seen Liverpool fail to even register a goal, their worst streak since Graeme Souness oversaw eight away fixtures without scoring in 1992.

The only points dropped in this remarkable league season have been on the road and they will be aiming to rectify their record against a Brighton side who have now all but safely secured their topflight status for 2020/21.

The Seagulls currently find themselves nine points above the drop zone with five games remaining to alleviate the pressure of uncertainty.

Liverpool should be confident of ending their poor record away from Anfield and have recent history behind them in meetings against Brighton having won all five meetings since their promotion to the Premier League.

Aside from Joel Matip, who is out for the rest of the season, Jurgen Klopp only has to consider minor knocks and injuries for his team’s trip to the south coast.

With just three days between Liverpool’s last game and their meeting with the Seagulls, there is another chance for rotation to inject fresh legs and avoid further injuries.

Andy Robertson had suffered a dead calf late in the win against Aston Villa but declared himself “good to go”, but form and rest could determine his place in the XI.

His likely replacement in James Milner, meanwhile, is set to be available after missing out over the weekend after “feeling something” in a muscle prior to the game, a setback which follows on from his hamstring strain sustained against Everton.

And continuing the theme in defence, Dejan Lovren is to miss his third consecutive game with a muscle injury of his own, leaving Klopp without another senior centre-back option once more.

There will also be many who hope to see the club’s youngsters provided with another opportunity to feature either from the off or from the bench following on from Curtis Jones netting his maiden Premier League goal.

Last 5 Away to Brighton (All Competitions)

Liverpool are just one goalscorer away from setting a new club record for the most players hitting the net in one league season.

It leaves Klopp’s side just five games to find the 18th goalscorer to see another record tumble in their wake, and there are only five obvious possibilities – one of whom is currently sidelined.

Joe Gomez, Neco Williams, Dejan Lovren, Harvey Elliott and Takumi Minamino are those who are without a league goal and are capable of being the 18th man.

Can Liverpool break their away duck at Brighton and also see a new record established?

Speaking in his pre-match press conference, Klopp stressed the need for his chargers to be ready for a Brighton side “full of confidence”:

“We play Brighton now. I’m not 100 percent sure if they are still fighting for staying in the league or they already feel secure, which is possible as well.

“They are a really good football team, I really think what they did over the last year is really incredible.

“Since lockdown, they changed their approach a little bit and they went for results. We don’t know exactly what we will face, a team in a good run and pretty much full of confidence. We need to be ready for that.”

Brighton vs. Liverpool will be shown live in the UK on Sky Sports Main Event and Sky Sports Premier League, with coverage starting at 8pm (BST) ahead of the 8.15pm kickoff.

Chris Williams will be keeping you up to date with all the action and providing his usual non-bias take on This Is Anfield’s matchday liveblog, starting from 7.30pm (BST).