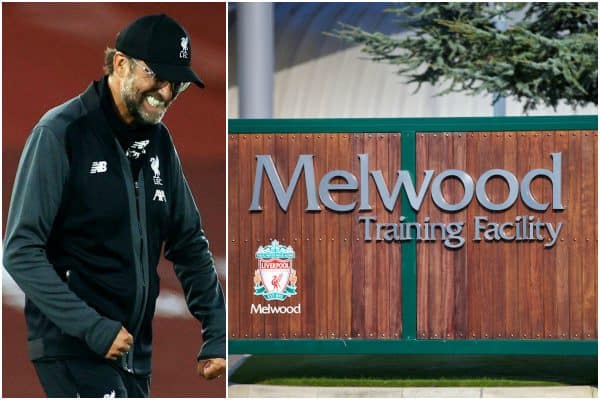 We all know Liverpool’s team is the greatest on the pitch, but Jurgen Klopp has reiterated that it’s only possible because the team behind the team is the same.

The manager has consistently demanded a ‘one club’ mentality of togetherness and cohesion, asking fans to believe in the team and the team to fight for the fans.

That symbiotic nature isn’t just an in-stadium occurrence, though, but one Klopp has nurtured and encouraged throughout the entire club—particularly at the training ground, Melwood.

Speaking to the club website, the boss has revealed some of the key relationships and examples of the closeness that exist at our base of operations, asserting once more than the incredible working environment which exists is the key to all the team’s success.

And it’s not just the coaching staff, but everyday personnel who make the training ground function, the members of the backroom team who the manager has brought in and the way all those people interact and support each other—which then lends itself to the players doing their job to their maximum ability.

“Without that atmosphere it would not happen, that’s the best description,” he said.

“I don’t think it is coincidence that for two years we have made these photos with all the staff of Melwood and in these two years, we’ve started winning things.

The boss singled out a few examples of the people who make the club tick in the most important preparation place: not always names who supporters might know, but individuals who work for Liverpool and set the best standards for creating happiness at work..and beyond, with even extended families getting together and knowing each other.

It all goes toward creating the most exceptional environment overall, which benefits everybody at the club.

“You go into the canteen [here] and it is like the happy place. Since I am in, I never experienced a bad mood in that area. And since Mona [Nemmer] is in charge, it is not only not a bad mood, it is a sensational mood; everything in there is like they are flying for us. That’s only an example.

“Coming in here, Carol and Caroline are obviously the most famous names in Liverpool and rightly so because they are the soul of all of this. It is just amazing.

“When we have the Christmas parties and we go there, everybody is there from Melwood and it is unbelievable. The cleaners, the gate guys, the security, they are all there and that makes this atmosphere.

“It is not a world-class football-playing side and some other people who give them some food to eat, or clean up when they leave the building. I like that, I personally want to have a workplace like this because I spend too much time here for getting up in the morning and thinking, ‘Melwood again!’ and that’s why we – all together – create this atmosphere.

“Years ago, we had some trips to Tenerife together and it was absolutely incredible. My wife is not at Melwood – and the players’ wives and the coaches’ wives, they’re not at Melwood – but she knows the whole kitchen team because we were there together in Tenerife and she likes that. That makes it all completely different and I really love that.

It’s an extraordinary look at arguably the most important place at the club: Anfield is where matchdays occur and results are earned, yes, but Melwood is where the plans are laid, the practice is perfected and the players make their day-to-day talent the best it can possibly be.

Klopp’s words also throw a reflection on how important it could be for the impending move to Kirkby: the same atmosphere will need to be replicated and maybe even improved, on a bigger scale at a new venue.

And if it is, there are even more potential knock-on benefits to the club, with the youngsters and youth coaches in turn all experiencing what it means to be part of an extraordinary Liverpool team.

The memories of the on-pitch successes are great for fans, of course, but for those who work day-to-day in the club and around the training ground like Klopp, it’s the interaction and togetherness which he says are what drive him on.

“They are such nice pictures and it is my fuel if you want, my petrol, that I get over the years that I can keep for a long time.”

More of the same once we get to Kirkby would be great!