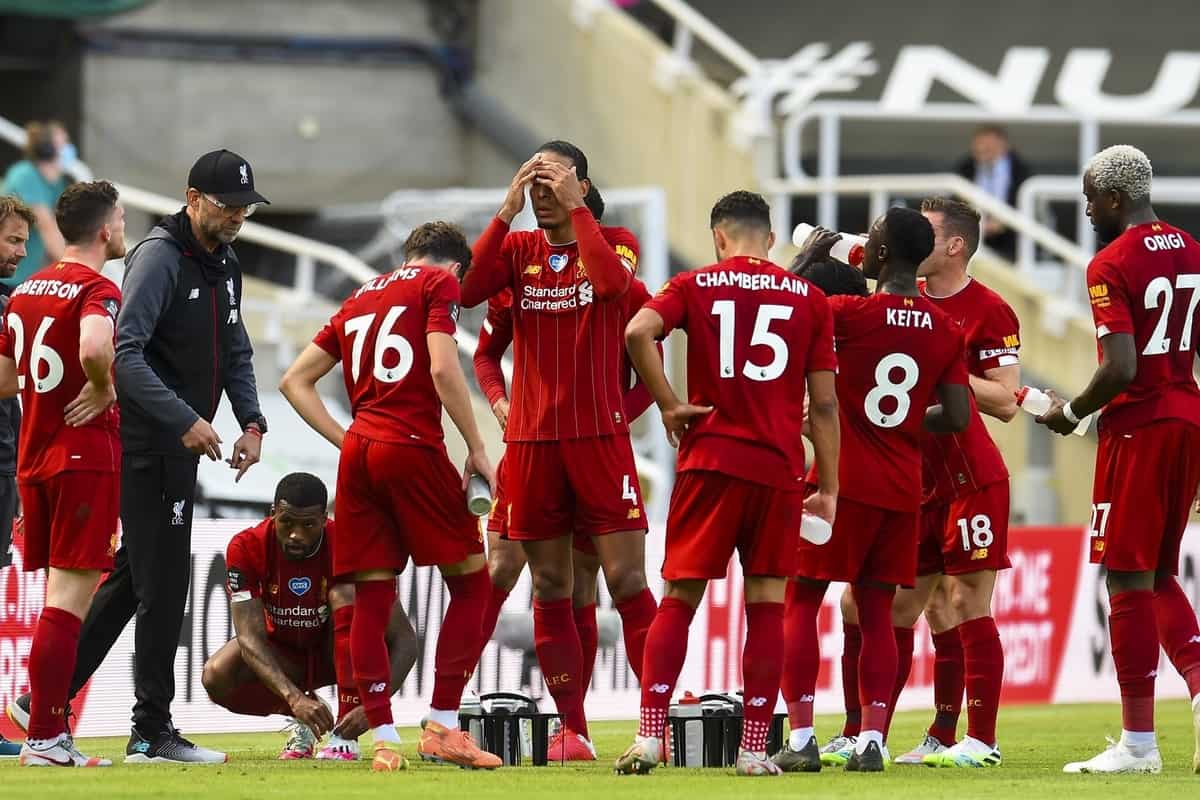 Liverpool have rarely hit top gear since February, winning just seven of their last 16 competitive games, but while this malaise is a worry, mitigating circumstances surround such ‘form’.

Remember when we dreamed about the Reds becoming champions for the first time in 30 years? Remember how we promised never to moan again?

What a fickle bunch we are.

Liverpool only got their hands on the Premier League trophy six weeks ago, but it hasn’t taken long for some negativity to return.

Saturday’s Community Shield defeat to Arsenal was the latest limp showing from Jurgen Klopp‘s team, as the new Wembley again proved to be a thorn in their side.

That performance, added to what some perceive to be a frustrating lack of urgency in the transfer market, has made for an increasingly cantankerous fanbase.

Ironically, in a six-month period that has seen Liverpool secure their greatest success in decades, there hasn’t actually been a huge amount to admire on the pitch.

Since mid-February, how many times have Liverpool actually played well?

The Reds were cruising towards title glory without actually playing good football at that point, showcasing an incredible winning mentality.

Norwich and West Ham were both beaten, but narrowly and unconvincingly, before Watford ended the invincibles possibility with a 3-0 hammering.

It was a loss that felt like it had slowly been coming, and the home win that followed against soon-to-be-relegated Bournemouth wasn’t one to treasure.

Klopp’s men were poor in the away leg defeat to Atletico Madrid, then fantastic in the home leg despite another loss – before football disappeared from our lives for close to three months.

Upon its return, the hope was that Liverpool would be primed to finish the season in style, not only inevitably winning the title, but smashing endless records along the way, too.

The painfully dull 0-0 draw with Everton was a sign of things to come, however, even though sporadic good performances were thrown in behind closed doors, most notably at home to Crystal Palace and Chelsea.

The pre-lockdown lack of attacking cohesion and increased defensive errors were out in force, as points were dropped against Man City, Burnley and Arsenal.

After a quickfire break, Liverpool’s pre-season was similarly stodgy, with the Community Shield display indicative of what has been on show since February.

The front-three didn’t click, Joe Gomez and Virgil van Dijk looked strangely susceptible and the midfield was at its one-dimensional worst.

But as fans grow more worried about the Reds failing to kick on and retain their league crown in 2020/21, should there really be cause for concern?

Despite the obvious joy of becoming champions, watching the Reds hasn’t been too entertaining in the last six months.

So many matches have felt like a chore to watch, mainly because of the amount riding on them.

Since the Watford defeat, there has arguably been one game that fell into the ‘must-win’ category: Atletico in the Champions League.

That is the only outing where it felt like something was genuinely on the line, such was Liverpool’s vast advantage over City in the title race.

Drawing at Everton was admittedly frustrating when the league wasn’t yet won and a points record was on offer, but it was a case of when they would be champions, rather than if.

Liverpool are a team who are at their best when they are playing regularly, finding a rhythm and showcasing both their superior fitness and ability over their opponents.

When there are long spells between matches, as has been proven with disjointed post-international break showings, the Merseysiders struggle. 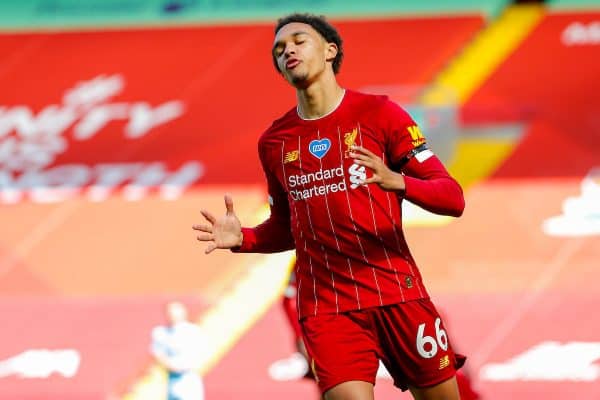 After almost 12 weeks away, it was, therefore, no surprise to see Liverpool look so far from their best, and there has been no great need to hit top gear ever since.

It is only natural that there has been a drop-off in intensity, especially since winning the league – even more so with no fans in stadiums.

When you have played at such a relentless level for two straight seasons, taking your foot off the gas when you can afford to is to be expected.

Similarly, pre-season is far more about fitness than performances for Klopp, so he is unlikely to be perturbed by the Salzburg draw or the lack of quality on show against Arsenal.

Such is our love for Liverpool, it is only understandable that we demand perfection, but these last six months have so many mitigating circumstances surrounding them.

It is unfair to be too critical.

The free-flowing magic has generally been nowhere to be seen, and cracks have appeared, but the timing is no coincidence.

Now is the Time to Judge

After this long period of effectively being champions for months, then playing meaningless league games and a couple of friendlies, actual must-win football returns next week.

It is less than a fortnight before Liverpool begin their title defence against newly-promoted Leeds – the time to really judge Liverpool will be from the moment that game kicks off.

This is when the intensity will return; this is when Mohamed Salah and Roberto Firmino will remember how to consistently control a ball again; this is when Alisson and Van Dijk will switch back on.

It is easy to forget that there was similar trepidation heading into the start of last season, considering Borussia Dortmund, Sevilla and Napoli all beat Liverpool in friendlies.

Then Norwich came to Anfield for the opening game and found themselves 4-0 down at half-time and Liverpool never looked back.

The Reds didn’t drop a single point in the league until October 20 and their next slip-up came four months later at Watford.

It would be wrong to assume that similar will happen again – such freakish consistency isn’t to be expected – but the judgment of this side should come when proper games return and only victory will do.

There is reason to feel slightly pessimistic, not least because of Liverpool’s seeming reluctance to spend money while others around them strengthen, but that will hopefully change before October.

The Reds being able to find their very highest level for a third year in a row will also be extremely challenging, as Man City showed last season.

It is, perhaps, worth noting how Klopp’s Dortmund followed up their Bundesliga title victory in 2010/11 – winning just two of their opening six league games, losing three, then winning 23 of the 28 games after to retain the title and win a domestic double.

Klopp and his players have justified us having total belief in their approach and these last six months should be viewed as a strange period when fans disappeared, matches didn’t mean much and levels understandably dipped.

If there aren’t improvements against Leeds, or in the fixtures that follow, negativity will be more understandable, but don’t bet against Liverpool flying out of the traps and silencing the doubters yet again.