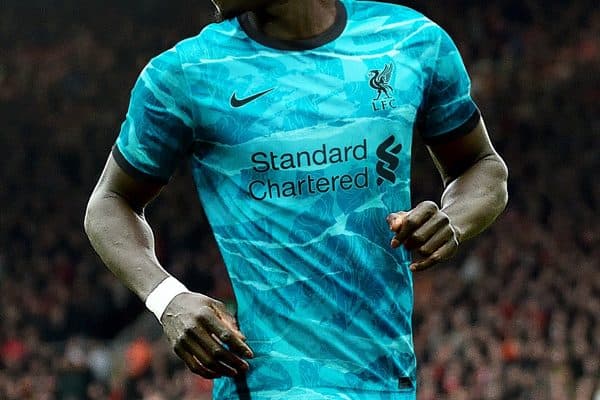 Nike’s VP for Global Football Apparel, Scott Munson, has explained the planning behind Liverpool’s new away kit for 2020/21, describing it as reflecting “the youth of the city.”

The Reds’ new ‘hyper turquoise’ away kit for the 2020/21 campaign was launched on Thursday morning, and received mixed reviews from supporters.

Mainly, the negative reception focused on the use of teal as the kit’s predominant colour, though this is not the first time a supplier has used the colour, with New Balance’s training kit from last season a prime example.

A textured design—which has also garnered criticism from some quarters—includes references to the Shankly Gates, and speaking to HYPEBEAST on the kit’s unveiling, Munson explained the research Nike undertook for the design.

“It’s the most fun part of the job when you get to dig around in the heritage and the culture of a city and a club, and come up with something from scratch,” he said.

“In the home, we brought all three colours of the club’s crest and its identity.

“We knew that bringing in teal was pretty significant. We tried to find the right balance of traditional with a modern twist.

“That color was most recently used in 1993, in a more subtle way, but we felt we were being a bit bolder with it. The club and the fans were ready for it.

“I think more so you see it in the pattern of the away. The floral motif coming from the Shankly Gates.

“We also used other elements of the Shankly Gates, like the cross of St. Andrew, the thistle and the Liver Bird in our pre-match jersey.

“You start to take those elements into the rest of the collection in various ways.

“That’s one thing that has been great about this club, there’s some pretty rich symbolism and we tried to hone in on it for this collection.”

Liverpool project that their deal with Nike will land them around £70 million a season, as though they will receive a base rate of £30 million, significant royalty bonuses were negotiated into the contract.

Nike have already seen NBA icon LeBron James, a minority shareholder in Liverpool FC, wear the home shirt before duty with the LA Lakers, and it is clearly the younger market they are targeting.

This is an understandable approach, and continuing his assessment of the away kit, Munson outlined their desire to “create a modern legacy” with a design that is “representative of the youth of the city.”

“It’s easy to look back and maybe reference something from the past or celebrate a milestone, like a 25th anniversary, but how do you create the modern legacy?” he said.

“How do you find the right balance of tradition yet progression?

“That’s what we have to balance and challenge ourselves with every time, and that’s where great design comes from.

“There’s two very different interpretations for the home and the away.

“While we felt like you had to be super respectful for the home, the away gives you more freedom and we created a bold statement.

“We think it’s representative of the confidence of the team, and the youth of the city.”