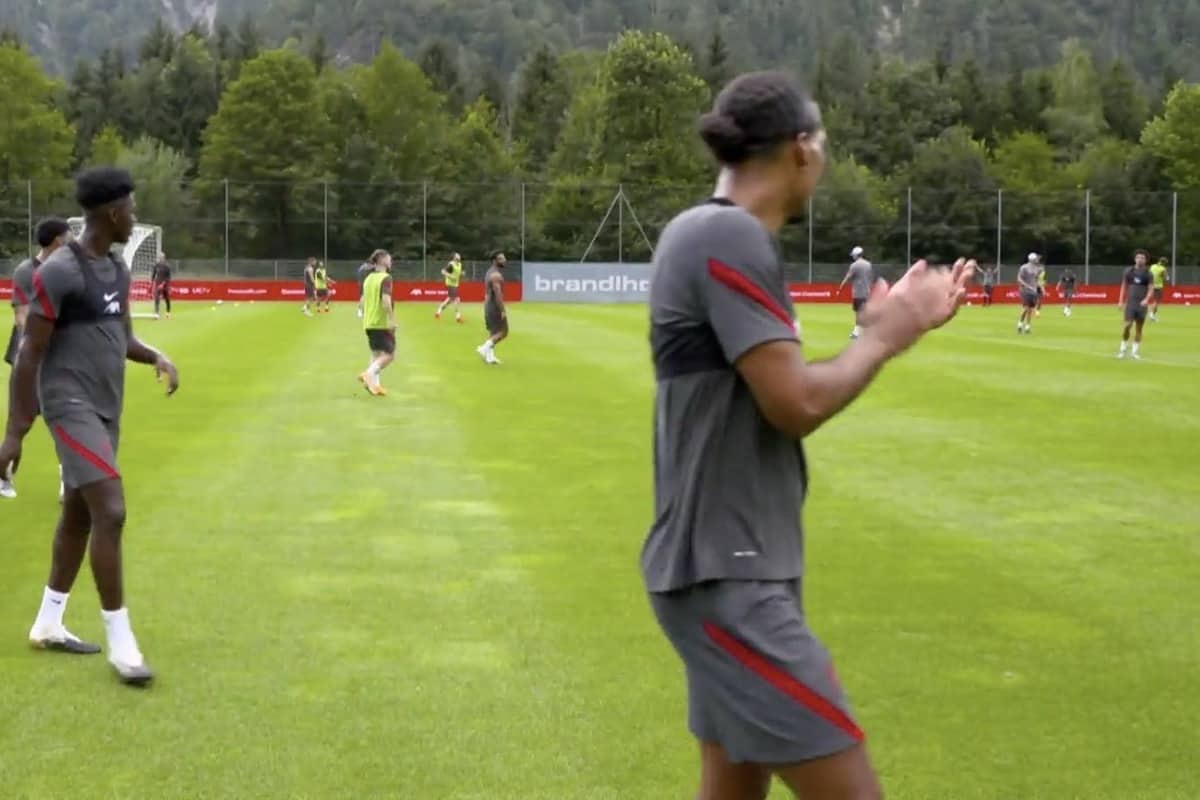 Liverpool have wasted no time getting back up to speed in pre-season, and Harvey Elliott was the subject of praise from Virgil van Dijk in an intense session in Austria.

It is now less than a month until the Reds get their title defence underway in the Premier League, while there is under a fortnight between now and the Community Shield.

That, and the short break between seasons, has ensured Jurgen Klopp‘s squad start quickly at their pre-season training camp in Saalfelden, with small-sided games played in front of the backdrop of the Alps.

Klopp is able to call upon a strong group of players in Austria, while assessing a host of returning loanees and youngsters who could make their breakthrough in 2020/21.

One player who is expected to make more of an impact next season is Elliott, with the 17-year-old having played eight times in his first campaign with Liverpool before signing his first professional contract in July.

In a clip shared on the club’s Twitter page, the winger could be seen in the thick of the action as he and Andy Robertson came up against Ki-Jana Hoever and Mohamed Salah in a high-tempo training game.

With James Milner‘s pass cut out by Robertson on the left, the Scot fed it inside to Elliott, who chopped the ball into space only to be closed down by Salah.

The teenager’s determination won it back, though, and he then teed up a perfect cross for Takumi Minamino to volley past Caoimhin Kelleher.

In the same session, it was Elliott’s pressing that prompted a frustrated Milner to scream “f***ing hell, get there Mo” as the youngster won a 50-50 with Hoever to allow Robertson through beyond the chasing Salah.

Robertson was unable to find Neco Williams with the resulting cross, as Gini Wijnaldum snuffed out the move, but the intensity with which Elliott pursued the ball was hugely impressive.

Elliott is still developing as a young player, and after a season with the first team at Melwood it seems he is honing his ability off the ball, along with his natural skill and technique in attack.

The encouragement of Van Dijk will go a long way, with the boyhood Liverpool supporter looking to soak up as much as he can from his older team-mates as he battles for a place.

Playing on the left in training may even be an indication of Klopp’s plans for Elliott moving forward, with the ex-Fulham youth revealing in an interview with The Athletic that he is often deployed at left-back in preparation for matchdays.

“To be up against Mo and to see what he does, how he moves, the way in which he changes his speed; he’s world-class and so tricky to deal with,” he explained.

There is no chance he will be converted to left-back in the future, but Elliott training in the role, along with further forward, should prime him for a long-term berth as cover and competition for Sadio Mane.