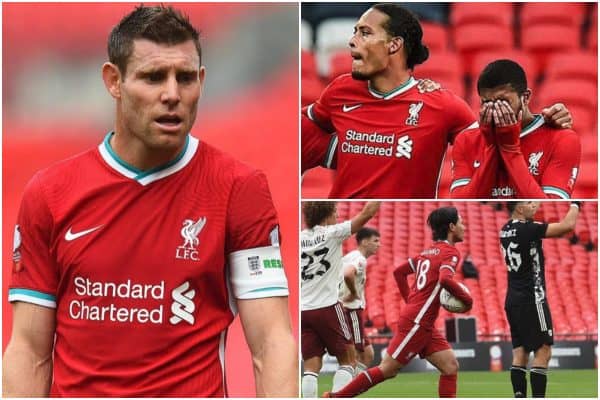 Liverpool forwards experienced contrasting emotions at Wembley as the Reds went down to Arsenal on penalties—but there’s no need for that to cause major alarm.

Jurgen Klopp‘s team put in a mixed performance in the Community Shield, being devoid of creativity and chances in the first half but dominant after the break.

Takumi Minamino equalised from Pierre-Emerick Aubameyang’s opener and sent the game to penalties, but the Gunners triumphed 5-4 after Rhian Brewster hit the bar.

Rather than be distraught by the outcome of a glorified friendly, Virgil van Dijk merely pointed to the similarities from last season: the Reds drew 1-1 with Man City in the same fixture, lost 5-4 on penalties…and went on to become Premier League champions.

The same sort of resolve and consistency is now needed for 2020/21, says the Dutch defender, starting with against Leeds United on the opening weekend.

“We are disappointed but we have to move on. Last year we lost on penalties as well and we won the league so we shouldn’t panic, but obviously we wanted to win today,” he said to the club website.

“During the whole game we played well, dominated, pressed them well and created many chances. Obviously in the end penalties is just a lottery and anything can happen.

“We had a massive chance with Millie, obviously my disallowed goal and a couple of dangerous moments but if you look at the game as a whole I think we created many chances that we should have done better maybe.”

Liverpool couldn’t ultimately add to their silverware collection, but now it’s about prepping for the proper games—although that will be interrupted by an ill-timed international break.

Van Dijk says the players know how to look after themselves and have done so over a testing few months, which should put them in good stead for a testing campaign ahead.

“Obviously now, we go to different countries, it’s going to be different but the situation we are in, everyone in the league has to deal with, so we have to make sure we are ready for after the internationals against Leeds.

“We have to manage ourselves well, be very professional and dedicate a lot towards the season, get your rest, eat well, sleep well and hopefully the fans can contribute with that and hopefully see them back in the stadium soon as well, it will definitely boost every one of us.”

Looking around the rest of the squad, Andy Robertson acknowledged that it was not our day at Wembley.

Not our day today #YNWA

Midfield duo James Milner and Gini Wijnaldum pointed to the fact this was another workout for the new season, in effect.

Not the result we wanted – but we’ll keep working hard to be ready for the new season ??? #ynwa

Minamino rightly posted a reminder of his first goal for the Reds:

And the unfortunate Brewster, whose first touch after coming on as sub was his penalty, promises to bounce back after his first real setback moment as a senior player.

Gutted with how things played out yesterday, but I’ll learn from it. Trusting the process. Love for all the support ?

Fingers crossed now the players all fare well on international duty in terms of fitness, and they return to Merseyside ready for the real action.

It’s a huge and long season ahead, and every one of them will be needed across the next nine months.