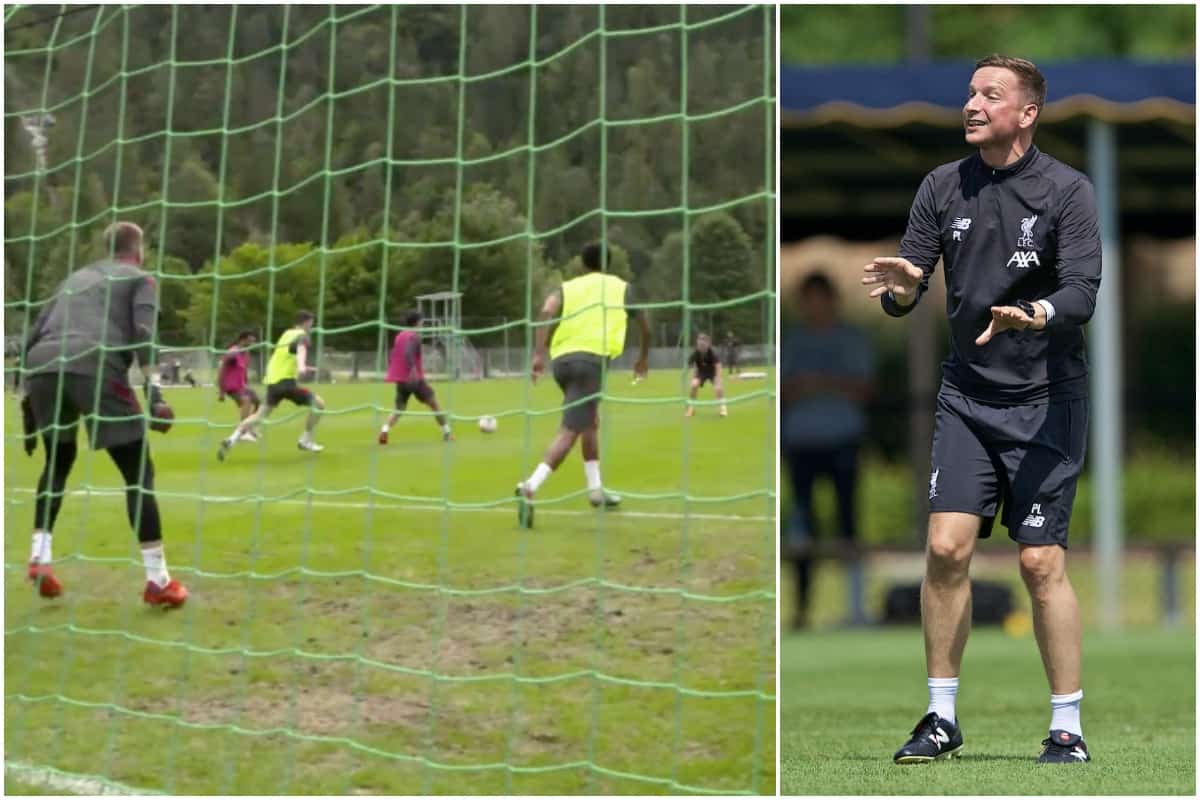 Liverpool continue to be put through their paces in Austria, with a move finished off by Harvey Elliott earning the enthusiastic praise of Pep Lijnders.

Jurgen Klopp‘s side remains in the throes of summer training in picturesque Austria, with the squad reunited for a 10-day camp ahead of their bid to retain their Premier League title.

They remain in Austria despite the UK government adding it to the list of countries where people returning will have to quarantine for 14 days from Saturday morning onward, having applied to the FA for exemption.

With the manager able to call upon the majority of his title-winning squad, returning players from loan and a host of youngsters, competition has been fierce if footage released from training is anything to go by.

Lijnders is well known for stressing that “our identity is intensity. It comes back in every drill.” And the assistant manager thrives on the fact that “you can stimulate certain common behaviour and create a lot by specific team training. That’s what I live for.”

And he was given that in abundance as seen in a clip released on the club’s Twitter page, with Elliott finishing off a team move in another high octane training game:

The move starts with the 17-year-old shifting the ball out wide to Mohamed Salah, who drives at Billy Koumetio who receives word from the onlooking Virgil van Dijk to watch his outside.

An untimely slip allows the overlapping Marko Grujic to pull one back to Takumi Minamino who then supplies the assist as Elliott curls one in from range beyond Adrian without taking a touch – a move completed in just eight touches from when the camera first spots them.

It earned the instant acclaim of “that’s football!” from Lijnders, with the Reds not showing any signs of easing off the gas as they get back into the thick of the action.

Applause swiftly followed the move but it was also welcome to both see and hear Van Dijk providing a voice at the back of “push up” despite not being involved in the passage of play.

Intensity is clearly the word both on and off the field whether in-season or during pre-season, a sign that continues to bold well for Klopp’s champion outfit.

One which is set to face both Stuttgart and Salzburg in the coming days, games which serve as ideal preparation for the challenges which lie in wait – with the boss eager for his team to swiftly “find our feet.”

“From a sports point of view, it’s important for us obviously after the mini-break to find our feet as quick as possible, if you want,” Klopp said.

“Training looks really, really good in the moment – this is actually what we expected, the boys didn’t lose a lot from the physical abilities.

“So now [we] are in the middle of the preparation, all the tactical stuff already. So it looks really good in the moment and the two opponents are really good opponents, so that will be really tough.”

The Reds will meet Stuttgart on Saturday (August 22, 5pm) and Salzburg (August 25, 3pm) before returning to England ahead of their Community Shield clash against Arsenal.