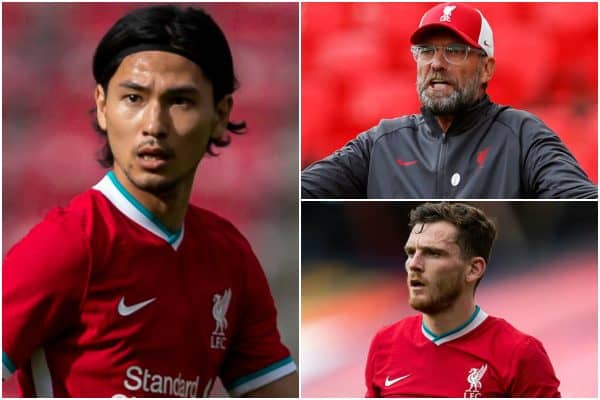 The good, the bad & who starts the opening game? – Debating Liverpool’s penalty shoot-out defeat to Arsenal

Liverpool suffered defeat in the Community Shield at Wembly, but there was much more to the match than the most minor piece of silverware in the English game.

A Takumi Minamino goal, his first for the club, cancelled out Pierre-Emerick Aubameyang’s opener for Arsenal and sent the tie to penalties.

Last time out we followed that up with a magnificent winning streak, though, en route to winning the league title—so can the same be hoped for this time?

Discussing that, and who the best performers were and the points to improve, are Karl Matchett (@karlmatchett), Dave Hendick (@TwoFootedPod) and Guy Drinkel (@guydrinkel).

DAVE: There wasn’t really a whole lot of good until Naby and Minamino came on to be completely honest.

Without Trent we lacked any sort of real creativity in the team, but when they came on the ball seemed to move quicker, the movement was much better.

We had a 20-minute spell where they were forced back into their own box, and we had 10 players in their half.

GUY: Starting with our best performer on the day Andy Robertson, it’s great to see him having stand-out games, after a period of looking a bit out of sorts in project restart.

It will be interesting to see if Tsimikas’ arrival will see Robbo take another jump with actual competition!

The first two substitutes in the game I felt had a positive impact, Naby didn’t have a 10/10 game but someone actually trying to do something in midfield was refreshing compared to the first half.

It was great to see Minamino get his first goal and, probably more importantly long-term, linking up somewhat with our front three with a bit of connection with Mo for the goal.

KARL: Have to agree that the subs changed the flow of the game in terms of tempo and movement between the lines, so as the above duo have already mentioned the players, I’ll give a nod of appreciation to Klopp himself.

It’s good to see him not relentlessly sticking with the same shape and having the plan in mind as to where other players can fit: Gomez, Fabinho, Gini, Mane, Bobby and Mo all switched roles within that double substitution.

Taki’s touch and quick movement with the ball was nice to see again, while another positive was seeing the newer members of the squad being confident enough to hit penalties—Minamino, Brewster and Jones aren’t the central members of the squad, but all stepped up.

DAVE: Neco had a poor game but young players have poor games. It doesn’t mean he isn’t, or won’t be, good enough.

I thought the midfield was bad until the changes. Stagnant, lacking in ideas. Wijnaldum lacked purpose, Milner reverted to pointless crosses.

Andy Robertson had a good game but crossed the ball far too often. As I mentioned, we missed Trent massively. When that happens we tend to become really predictable and end up relying on Robertson to cross time after time.

GUY: The first half! We just seemed to have nothing going for us except Robertson. The midfield I thought was particularly poor, with Fabinho looking Space Jammed again (although he improved in defence), Gini looking particularly ghostly and Milner was probably the best of the three but is better suited to come on in games rather than start them.

I think the midfield being poor also had its knock-on effects on players like Neco too, leaving him exposed for their goal wasn’t very good at all.

Last poor thing was probably the Brewster sub; I imagine Klopp wanted him to get more minutes but to just bring him on for the shootout over the very experienced Gini seemed a bit too much risk for little reward.

Although it is a glorified friendly.

KARL: Midfield failed to make runs forward, front three didn’t have the movement between the lines, Salah stuck himself in packed areas too often…it wasn’t great for the first 45 minutes.

Most of all was the fact that several good, low crosses from Robbo had absolutely nobody rushing in to attack or anticipate them, as if it’s a surprise that he can deliver that type of pass.

Bit rubbish being at Wembley with no fans, too, as well as not beating Arsenal in successive attempts. Don’t want to be giving teams ideas of how to play against us, do we!

…and who has secured their place in the team for Leeds?

That will require Fabinho to play next to Virgil, with Robertson rounding out the back four.

The front three is the front three but I think there’s a real argument to be made for going with a front four and starting Minamino too.

Naby has to start, with Gini taking the holding role in midfield because of Fabinho dropping back to centre-back.

The only alternative would be Jones-Gini-Naby as a midfield three with the usual front men. Jones impressed again in his brief cameo against Arsenal.

We need more creativity (paging Thiago Alcantara), so Minamino or Jones have to start with Trent out.

My team is probably the easiest one to pick at the minute, the defence and forwards pick themselves and with Henderson currently injured and behind on preseason and I’d rather pick Naby and Gini.

If Henderson is ready for the start of the season I’d swap Gini out…or use Thiago, obviously…!

KARL: I’d definitely have Keita in. We will need players who can beat Leeds‘ approach, which will undoubtedly be extra aggressive, willing to commit to tackles and trying to force us backwards. Naby can exploit those gaps and avoid the challenges on the turn.

I don’t imagine Minamino will start but he should at present be first attacking option off the bench.

Fingers crossed we’re looking a bit sharper by then!