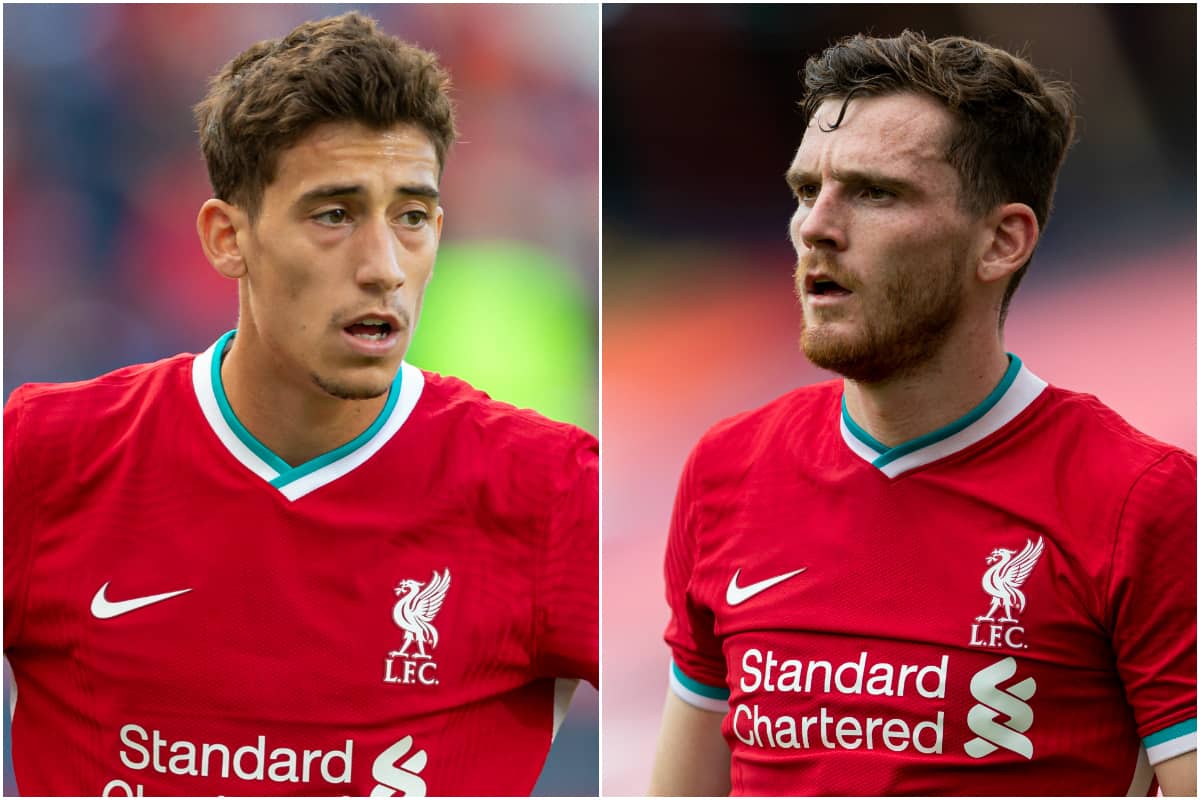 Andy Robertson has welcomed the competition from “really good” left-back Kostas Tsimikas, as he bids to prove he is still “No. 1” in his position for Liverpool.

Since he established himself as first-choice left-back for the Reds, Robertson has rarely had a convincing battle for his place in the side.

Alberto Moreno was on his way out, while James Milner has only served as backup in an unnatural role, and beyond that the likes of Neco Williams, Joe Gomez, Ki-Jana Hoever, Yasser Larouci and Gini Wijnaldum have filled in.

But the signing of Tsimikas has changed things, with the £11.75 million arrival from Olympiakos giving Liverpool two strong options in a crucial position.

Robertson is undoubtedly first choice at this stage, but Tsimikas will be eager to fight for the shirt after making the step up from Super League Greece.

Tellingly, though, the Scot has embraced his new competition, telling the club’s official website it is his “objective” to keep his new team-mate out of the side.

“He’s obviously in my position and I want to stay the No. 1 left-back,” Robertson said.

“I want to play as many games as I can, to stay fit, to keep my levels high and I want to be playing every game.

“I know that’s not always possible but that’s my attitude going into it and it’s up to me to keep putting in performances and hopefully stay No. 1 left-back.

“That’s my aim [and] I’m sure he has similar aims but we need competition all over the park.

“We have competition in every place and it’s up to the lads that get the starting jersey to keep it and that’s certainly going to be my aim.

“It’s my objective to do that and hopefully I can do that.”

Tsimikas arrives with a burgeoning reputation due to his performances with Olympiakos and the Greece national team, and he has impressed with his outings so far in pre-season.

He boasts similar qualities to Robertson, particularly his thrust and delivery in attack, while Liverpool’s No. 26 has attested to the way he has settled at the club, already forming strong bonds with the likes of Adrian and Mo Salah.

“You can see him growing in confidence as a player and as a person in the squad and I think that’s credit to all the lads and all the staff,” he continued.

On Tsimikas as a player, Robertson said he had looked “really good” so far in training, and while he admitted he had not seen him play for Olympiakos, he acknowledged that the club had “obviously seen something.”

He concluded that he had “no doubt” Tsimikas can boost the squad at Anfield, and this is the mentality every player should have when approaching those brought in to play the same position.

It nurtures the positive attitude throughout the squad, and hopefully, Tsimikas and Robertson can help bring the best out of each other in a season that will undoubtedly require rotation at left-back.