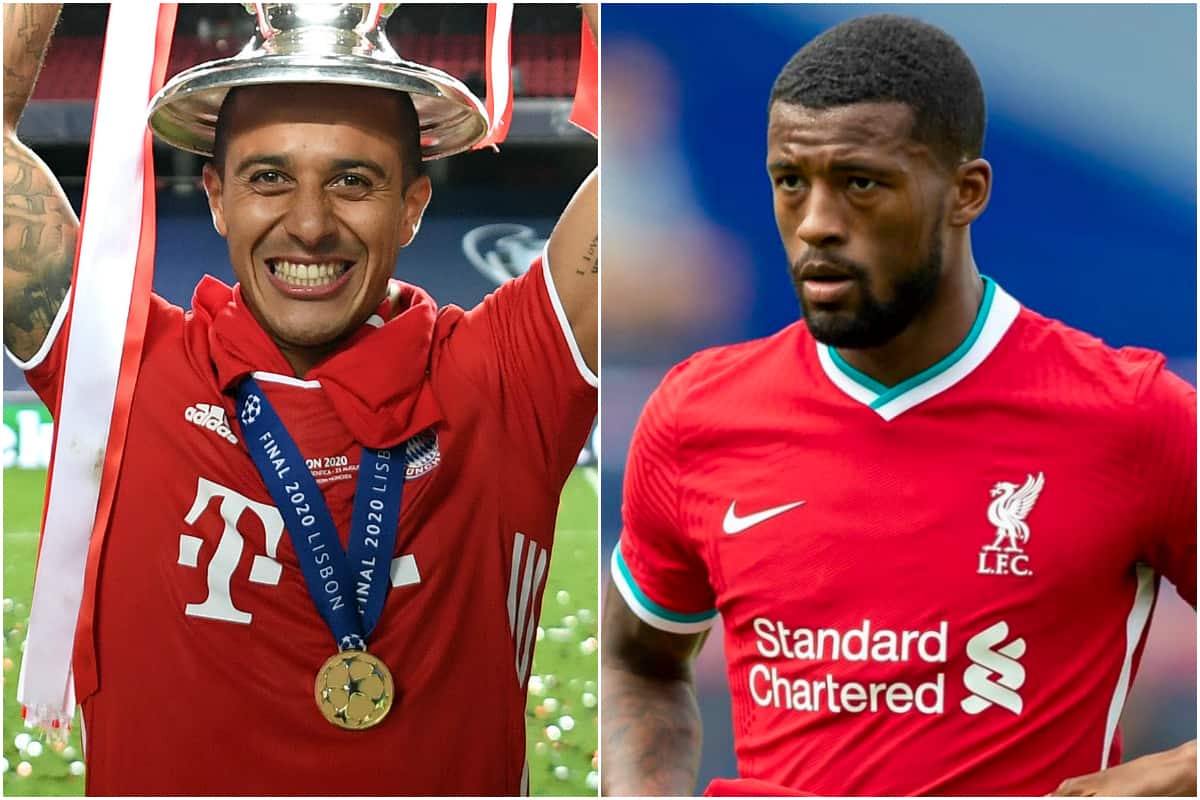 Jurgen Klopp admitted it is “nice that Liverpool are linked” with Thiago Alcantara, but claimed there is nothing more to reports, while Gini Wijnaldum appears set to stay.

Thiago has been the player most frequently linked with the Reds throughout the summer transfer window, and it is believed that Klopp does hold a strong interest in the midfielder.

But whether or not Liverpool can finance a deal remains to be seen, with no breakthrough in reported talks with Bayern Munich so far, as the Bundesliga side value the 29-year-old at around £30 million.

Returning to Melwood for his pre-Leeds press conference on Friday, Klopp was asked the inevitable question about Thiago, and while flattered, he stressed that there is “nothing to say.”

“If I could invent a word that could end speculation, I think I could become really rich,” he joked.

“I cannot end speculation as long as the transfer window is open, so that’s all I can really say about that.

“Did I mention that Thiago Alcantara is a really good player? [I did] long ago already!

“It’s nice that we are linked with him, but that’s pretty much all, really. It’s because he’s a good player, Liverpool’s a big club, so that’s nice.

“But apart from that, really nothing to say about that. And maybe good for you, I cannot end the speculation!”

Thiago‘s arrival is rumoured to be dependant on the sale of Gini Wijnaldum, who is in the final year of his contract and attracting interest from Ronald Koeman’s Barcelona.

But it was claimed on Thursday that the Dutchman had held “positive talks” with Klopp on his return from international duty this week, with suggestions he could now stay at Liverpool this term.

Klopp was questioned on reports on talks with his No. 5, and brushed them off as expected.

“It’s interesting, since Gini’s here I think I’ve had five or six hundred talks with him pretty much,” he said.

“That’s exactly the same as always, so nothing else to say about that.

“Yes, of course, I spoke to Gini, he came back from international duty and then we had a talk, that’s always like this and that’s all.”

Pressed further on his relationship with Wijnaldum, Klopp said “it’s great,” and in explaining that the situation is “all good for the moment,” he implied that the 29-year-old could stay this season before leaving on a free transfer.

“It’s all good for the moment. You know the situation. Between Gini, me and the club, everything is completely fine.”