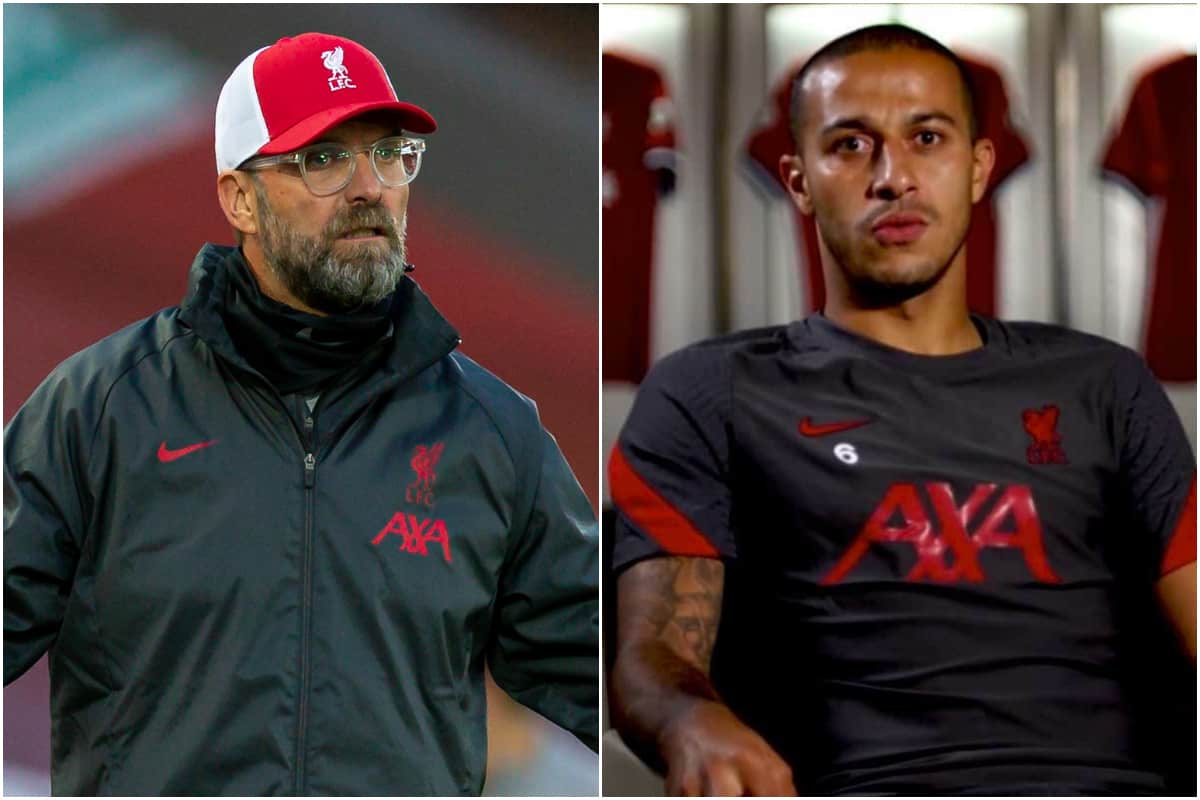 Liverpool manager Jurgen Klopp is not worried about keeping his players happy after the signing of Thiago Alcantara further increased midfield competition.

Once the £20 million new arrival is up to speed he is likely to be one of the first choices for a spot in the middle of the park, and as Klopp has insisted no player has to leave to accommodate the 29-year-old it leaves something of a conundrum.

When all are fit he will have eight players competing for three places but the Reds boss believes that will be necessary with the schedule which awaits them this season.

“They cannot all play in the same moment, that is true but you cannot keep a player happy by yourself. I am not worried about that,” said Klopp, who late on Friday also saw a £41m deal for Wolves forward Diogo Jota agreed.

“If we have more than three midfielders, for example, and we play 4-3-3, then a couple of players will not start or come on, that is always the case.

“Some don’t have the opportunity to come on and that is the squad for a matchday, that is how it is.

“But my job is to show the players how important they are in pretty much every moment.

“In training, in the lineup, on the bench, or a week later in the same situation.

“I cannot prepare for a normal season when a season is not normal. That just doesn’t work.

“If everyone is fit, rotation is absolutely necessary because it just doesn’t work otherwise.

“We just have to try and make sure we can deal with this situation. So yes, I want my players happy but we cannot make them happy. They are a big part of that as well.”

Having been pushed all the way by Premier League newcomers Leeds last weekend, Liverpool head to Chelsea on Sunday for another tough examination.

Thiago’s paperwork was registered with the Premier League in time for the Spain international to be included in the matchday squad and the two teams meet less than two months after Liverpool’s 5-3 victory on the night they were awarded the Premier League trophy at Anfield.

Despite that defeat Chelsea went on to secure a place in the top four and having spent almost £240 million this summer, Frank Lampard’s side will be expected to close the 33-point gap of last season.

Klopp, however, insists it is premature to build up this contest into anything other than it is.

“It’s too early [to say it’s a game of title contenders] because it is not about what we should achieve with the squads we have and things like this,” added the German, whose backroom staff were involved in a row with Lampard in July.

“That is nothing that I think a second about. What I know about Chelsea is, I have been in England for five years and all the games with different managers are always incredibly difficult because they are just a good team.

“They lost two players with Pedro and Willian, who are really decisive players, but they have brought in some really good players and we all know that.

“There was no year when Chelsea vs. Liverpool was not, before the game, seen as a top game and now we have to make sure people will see that as well when they watch it.”