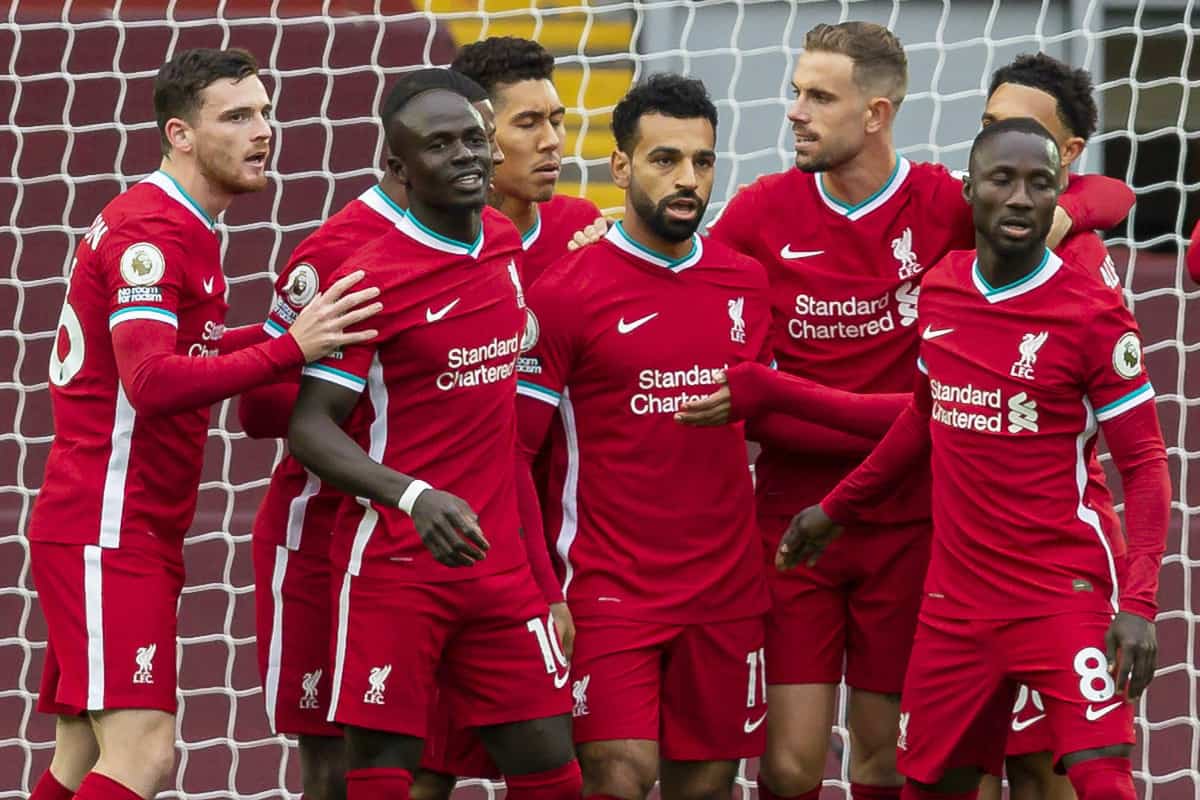 Liverpool started the defence of their Premier League title with a 4-3 thriller at home to Leeds, taking the lead and losing it three times before a late winner.

Couldn’t do anything about the first goal but had to be more commanding for the second. Not his best day, but not helped by the defence in front of him either.

Way off the pace. A surprise he started given he had no pre-season with the Reds at all and played for England in the international break.

Beaten by Harrison for Leeds‘ first goal and not the Trent of usual going forwards either.

Some good recovery moments, but at other times struggled with Leeds‘ movement from midfield to attack. Like Trent, culpable in Leeds‘ first goal.

Brilliant header for the goal, abysmal attempted clearance for the equaliser.

We saw one or two sloppy moments at the end of last season which were excused due to parties, lowered intensity and the title having been won – we start from zero now, so need to bin these errors off quickly.

Perhaps this was a gamble from Klopp to essentially give the captain his ‘pre-season minutes’, since he didn’t get any of the real ones and we have a week until the next game.

One early driving run signalled his early intent. Was a little more restrained than usual, probably due to the Leeds counter threat, but his passing was good and he won back the ball as often as usual.

Can confirm he didn’t play in a Barcelona shirt. Usual strong defensive work, a few nice link-up moments going forward. Should have scored at least once though.

The magic is back in his boots. Thunderous finishes, fairy dust touches, lightning pace across the ground. Ice-cold penalty to win it late on.

40 for the season incoming…

Vastly better than the Salah we saw after lockdown. His third Premier League hat-trick.

All the usual aspects of his game were on show. Clever movement dragged the centre-back out of position, thanks to Leeds‘ insistence on man-marking, while his touches around the box almost created a few good openings.

Could have shot early on instead of trying a cut-back, and should have scored when put through at 3-3.

Some lovely movement and always looked dangerous… though it didn’t quite happen for him on the ball in the first half. A few wayward passes, blocked shots and dead-end runs on the ball.

Didn’t get involved much and certainly didn’t protect the defence any more than the starting midfield did. But won the late pen so deserves a medal, really.

Interesting to see him get the nod off the bench ahead of others, certainly showed his confidence and strong running ability. Klopp is certainly starting to trust him.

Have to be a few questions about starting Trent and Hendo, despite them obviously needing minutes at some stage.

Keita was playing well too, so the sub to bring him off was a surprise.

There has to be more of an emphasis on cutting out errors at the back and solidifying that back line though – it was rubbish after we’d won the league, which was largely fine, but now we’re starting all over again.

Let’s get it right quickly.