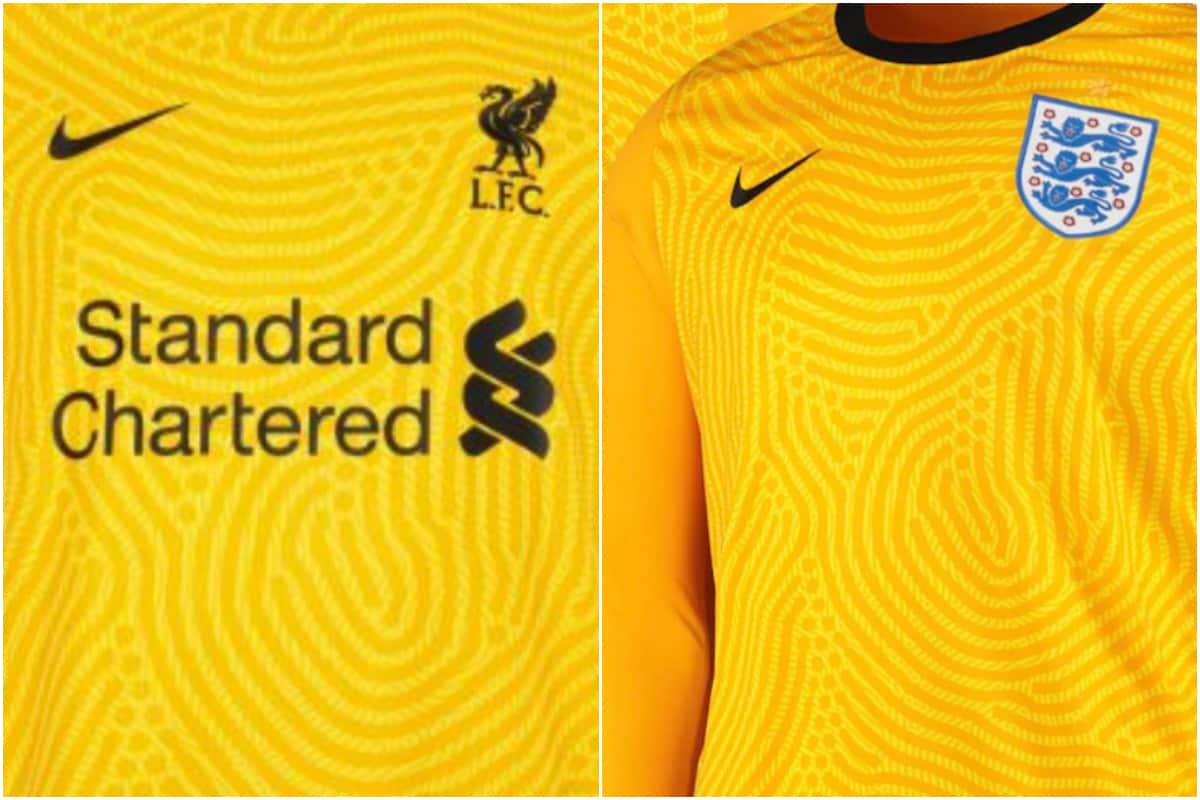 Back in February, Nike’s senior director vowed that they were “ditching the templates,” but England have now unveiled the same goalkeeper kit as Liverpool.

Prior to the unveiling of Liverpool’s first kits with their new manufacturer, Nike senior director Heidi Burgett responded to supporters’ concerns over whether the club would be given unique designs.

With Nike notorious for their use of templates across clubs and national teams over the years, Burgett’s words were reassuring as she claimed they were “ditching” their previous approach.

“We’re ditching the templates,” she wrote on Twitter in February.

We're ditching the templates. For the 2020 kits, Nike designers had 65 chassis options available to them across varying necklines, sleeves, cuffs, badge placement, etc. From hand-drawn prints to custom fonts, each team’s look will be its own.

“For the 2020 kits, Nike designers had 65 chassis options available to them across varying necklines, sleeves, cuffs, badge placement, etc.

“From hand-drawn prints to custom fonts, each team’s look will be its own.”

Of course, her use of the word “chassis” was already a red flag, and as Nike have rolled out their new designs for 2020/21, a host of similarities have emerged.

This is none more so than with their goalkeeper kits, and with England unveiling their new look on Wednesday, the comparisons were stark:

Everton’s Jordan Pickford is modelling exactly the same shirt as Alisson will wear for Liverpool’s away games this season—bar, of course, there being a different badge.

It is not the first time this has occurred this summer, either, with Zenit St Petersburg’s goalkeeper kit for the new campaign the same as the Reds’ kit for home games.

Nike have given Liverpool and Zenit the exact same goalkeeper kit ? pic.twitter.com/WZANdIIjhc

Upon the reveal of the outfield home kit, too, many supporters highlighted the similarities between Nike’s design for the Reds and that of Barcelona.

While it is not uncommon for manufacturers to employ templates for their designs—it would be difficult to produce completely unique kits for every club, particularly for a brand with Nike’s connections—it flies in the face of Burgett’s defiant pledge back in February.

Given the prices charged for the kits too, the apparent lack of creativity comes across as negligent.

Liverpool are unlikely to be fazed, though, due to the projected earnings of their new agreement with the American brand.

While they are set to receive a low base rate of £30 million a season, the royalties negotiated into their deal with Nike have been projected to be able to lift this to up to £100 million.

Whether the current financial climate alters this remains to be seen, but with adult shirts retailing from £70, they will be hoping to pick up a sizeable amount as fans buy their kits for 2020/21.