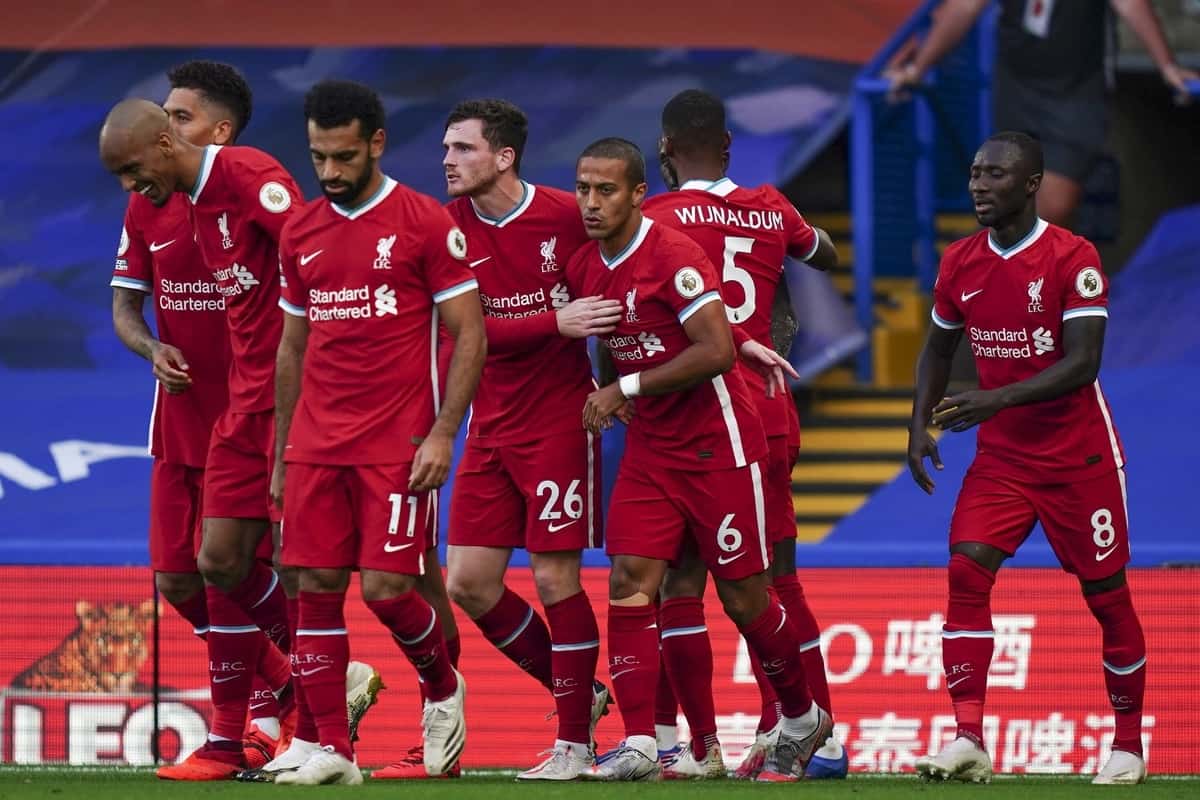 Liverpool dominated Chelsea from the first whistle to the last and picked up a 2-0 win at Stamford Bridge in the Premier League.

Fabinho at the back

New centre-back needed? Not on this evidence. The Reds have lots of midfield options, Jordan Henderson played well as the No. 6, Thiago is elite and others can fill in as needed.

Meanwhile, the Brazilian was unbeatable at the back, winning two early challenges against Timo Werner and then mopping up everything second half.

One recovery was particularly impressive and important, while of course his passing out of the back line was as impressive as it usually is further forward.

It’s important to remember that, while the options looked thin on the ground at kick-off, neither Matip nor Gomez will likely be out long and a couple of youngsters lie in wait for minutes, too.

Liverpool will cope, one way or another, if we have to stick with three centre-backs for the season.

We might not have expected to see him so quickly, but Thiago Alcantara made his Reds bow in the second half, just a day or so after signing from Bayern Munich.

He was a half-time replacement for Jordan Henderson, who was worryingly taken off with a thigh issue, and it will have intrigued Reds to note him slotting straight into the deepest role in midfield.

Many have thought he is being brought in to play further forward, and perhaps over time he will, but his first job was to dictate the Reds’ play from deep and with time and space, given Chelsea were down to 10 men.

On the ball he was predictably heavily involved, making a few neat through-balls without ever really threatening to create the expected 20 assists in 45 minutes of play.

Off the ball we saw the less-appreciated side of Thiago‘s game: work rate, fiercely combative play and the willingness to make big, aggressive challenges.

He gave away a penalty – he owes Alisson a Bavarian stein of beer for the save – and crunched Timo Werner again soon after, so there’s no toning down of that side of his game after moving to England.

Sadio Mane really does offer the lot, and here he was the defining character of the match once again.

The No. 10 was a little off the boil against Leeds in terms of his penalty box work, but here he completely tore Chelsea apart.

Several early runs offered promise, before one sprint infield led to the red card prior to half-time, hauled down by Christensen just as he would have lobbed Kepa.

Two quickfire goals after the break showed more of his best traits, with that relentless running off the ball the main attribute which makes Mane an irrepressible talent.

A tale of two keepers

Kepa made a couple of good saves, but the fact he’s such a loose cannon and can waver from good to garbage in the space of half an hour is exactly why he’s nowhere near an elite goalkeeper.

They all make passing errors these days, and that was a killer for the game, but he’d also already been caught out in a foot race with Salah.

Meanwhile, a couple of naughty individuals had dared to suggest Alisson wasn’t quite at his peak, so this was a well-timed clean sheet – and a Mignolet-esque penalty save.

No first-choice pairing in front of him, a couple of good claims and a late save to his left all added up to a good, if quiet, outing for Ali, plus his delight in the celebration for the pen save was clear for all to see.

Two games in one week! What an easy start to the season. Now that’s all over and done with and it really cranks up a notch.

Jurgen Klopp will have to rotate a little more, chances will come to those who have watched on so far, but the winning run needs to continue.

Great start and two from two for the Reds.