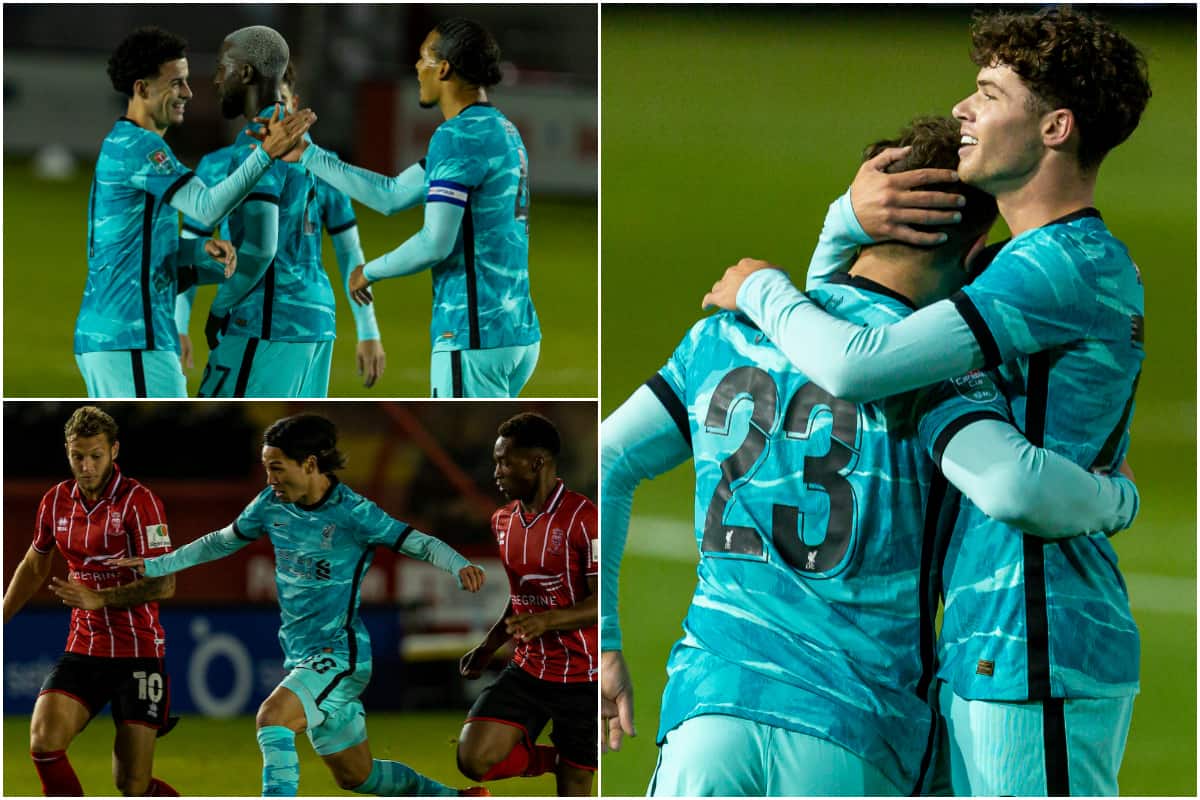 Liverpool strolled past League One side Lincoln with a 7-2 win in the League Cup third round, highlighting Jurgen Klopp‘s squad’s increasingly impressive strength in depth.

The Reds arrived at Sincil Bank with a surprisingly strong squad, with assistant manager Pepijn Lijnders vindicated in his words in his pre-match press conference.

Virgil van Dijk started, while Fabinho and Trent Alexander-Arnold were both on the bench, but on a night that saw 10 changes to the starting lineup and three players make their debuts, it was those on the fringes that shone.

Takumi Minamino and Curtis Jones both scored braces, while Xherdan Shaqiri, Marko Grujic and Divock Origi also got on the scoresheet, with the result only let down by consolation efforts from Tayo Edun and Lewis Montsma.

The victory sets up a fourth-round clash with Arsenal at Anfield, three days after the same fixture is played in the Premier League on Monday night.

With a busy week ahead, Klopp can take a lot from this win at Lincoln.

Here, This Is Anfield’s Jack Lusby (@jacklusby_) and Matt Ladson (@mattladson) are joined by Read Liverpool and The Redmen TV’s Ste Hoare (@stehoare) to discuss the win and its impact on Klopp’s plans.

JACK: There were very few faults to that performance, and the fact that a side featuring 10 changes and many who have barely played together could produce such a cohesive display is very encouraging.

Jones and Minamino were the stars; Klopp was right to note how Taki “set the rhythm,” and Jones was rightly honoured for his finesse and determination all the way to the final whistle.

That Klopp was able to give Diogo Jota his debut in a settled surrounding was also a big positive – he barely made an impact, but these early games can help him adjust to the demands on him at Liverpool.

STE: Before looking at any individuals, I think the most pleasing thing was that Liverpool, having made 10 changes, still looked like Liverpool.

We’ve seen so many times down the years in these cup games that the style of play can alter dramatically when so many changes are made, but this second-string XI just played exactly like the regular first team, which was great to see.

In terms of individual players, I think most of them did pretty well but Jones and Minamino stood out the most.

Jones’ confidence and ability will give him a real chance to become a Liverpool star of the future, whilst Minamino is starting to look like he belongs too after a rather quiet start to his Anfield career.

MATT: I think Ste is spot on there that it still looked like a proper Liverpool side, that’s a massive positive.

Aside from the obvious two impressive individuals, I thought Marko Grujic did well, albeit in quite comfortable surroundings. He did the simple things well and that’s most important in such a role as he had on the night.

Shaqiri’s midfield position was a surprise, but nice to see. That’s either adding another string to his bow or putting him in the shop window further for the next fortnight, but either way he worked hard and knitted the midfield and attack together nicely.

JACK: It would be wrong to focus on the negatives after such a comprehensive performance; most, if not all, of the side selected gave a good account of themselves and any issues can be expected given the circumstances.

In fact, I’d use this as an opportunity to highlight the strange criticism of Neco Williams in the wake of one of the biggest away victories in the history of Liverpool Football Club.

Scrutiny of a 19-year-old, clearly still learning to play a particularly demanding position for the best side in the world, is bizarre, and it appears to have affected Neco as his social media activity suggests.

Twitter and Instagram are still not a reflection on wider society, and personally I’d question why any footballer uses either platform without a strict privacy function, but the abuse can impact a young player’s confidence.

He’s 13 games into his Liverpool career – seven of which have come in the cups – and he’s backup to the best in the world in his position.

Criticism can be warranted, particularly if constructive, but is there any need after these results? 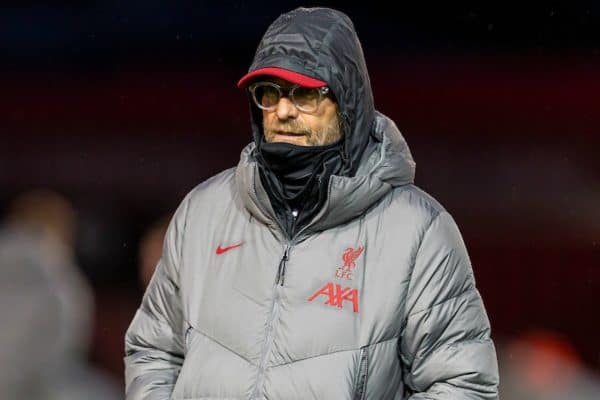 STE: Considering Liverpool were on the attack so much, Divock Origi struggled to fit in at all and although he got his goal at the end, he did not play particularly well.

Adrian was an odd one too in that he made some really good saves and got out to the feet of the attackers well at times, but then looked lost at the corner that led to the second goal.

MATT: I completely agree with Jack in that I cannot for a second understand why a professional footballer, especially a young one, has a Twitter account. Or if they do, just have somebody else run it for them. Clubs should be advising against any young player having Twitter on their phone.

Aside from Williams, like Ste says, Origi was really awful, yet he gets his almost customary goal right at the end there. His movement was poor/non-existent and he was easily shrugged off the ball by Lincoln’s young centre-back on more than one occasion.

With Jota arriving, you’d think Origi would be keen to force his way into staying, but now I imagine the only way he stays is if nobody else has seen enough to bid for him… which looks increasingly likely.

And who showed they can play a bigger role this season?

JACK: I think as much as those who shone on Thursday night, the biggest testament to the strength Liverpool possess now was in who outside of the usual first-choice side didn’t feature.

We’re talking the likes of Alex Oxlade-Chamberlain, Rhian Brewster and James Milner, who all missed out for one reason or another but would, in any usual situation, start these games for us and be regulars for the majority of Premier League sides.

In terms of those who showed they can start more often for Liverpool, from this game the obvious candidates are Jones and Minamino, but Kostas Tsimikas also slotted in excellently and proved he can provide able cover for Robbo.

Grujic and Shaqiri looked very comfortable and, in my opinion, could be useful to Klopp until at least January, while Rhys Williams deserves a mention for his assured display.

Having Williams and Billy Koumetio battling it out on the fringes of the centre-back ranks could be a very healthy situation in a very busy campaign.

STE: I mentioned both Jones and Minamino earlier and I’d have very few worries about dropping either of those players into a Premier League game from this point onwards, and I’d expect both to get some minutes too.

Like Jack, I also thought Shaqiri showed that he’s got the talent to play well for Liverpool if and when he’s called upon, and he shouldn’t be completely written off just yet.

MATT: Look, if suitable offers come in for Grujic, Origi or Shaqiri I’m sure they’ll move on, but if any/all of them end up remaining then they can certainly contribute during what is going to be a crazy congested season.

For the Arsenal game in the next round, I’d expect a very similar side, with Gomez or Matip coming in for Van Dijk – then after two games, one against Premier League opposition, we can assess things better because we can’t be going overboard about Shaqiri in midfield just because he played well in one game at Lincoln.

Play well in that Arsenal game and a player such as Shaq or Grujic either impress Klopp to stay around until January at the least, or another manager is compelled to make a bid.