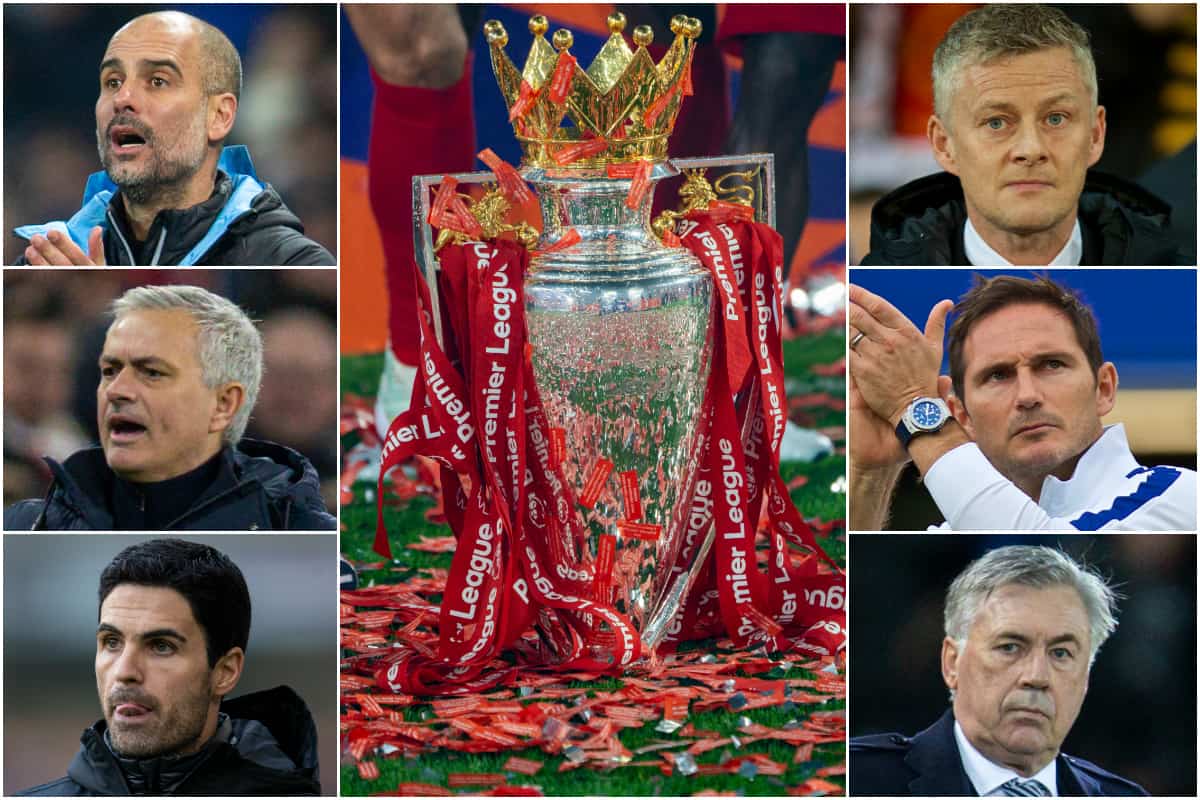 Liverpool are expected to be in another Premier League title race this season, but do rival fans believe the Reds will retain their crown?

The (short) wait is almost over and another league campaign is almost upon us.

Liverpool open up their title defence with an intriguing clash with Leeds at Anfield, aiming to make another flying start.

With Man City desperate to get the title back and other rivals spending big in the transfer window, it looks set to be an even greater challenge this time around.

We spoke to supporters of the 19 other Premier League clubs to find out where they are tipping Jurgen Klopp‘s champions to finish.

Why? It will be closer than last year and difficult to repeat the trick after a relentless couple of seasons and a much shorter turnaround, given the late finish.

I imagine that will be tough for the players, both physically and mentally, and Liverpool may have to dip into their squad a bit more.

But I think they will get there.

Why? I guess it could change if Thiago walks through the door, but right now Man City are the favourites for the Premier League title in my eyes.

Just like in 2017/18, they’re something of a wounded animal, having endured a season in which they only won one cup, and are making moves this summer. Last time that happened they bagged 100 points.

Meanwhile, the Reds are dithering a bit.

Why? Man City‘s defence and spine are still not looking good enough and Chelsea are a work in progress, even after improving their squad.

Liverpool can probably go another one or two seasons without a major investment in players.

Why? I expect you to be challenging for the title again.

There’s still time for some major transfers for other teams who are trying to catch you, but adding one or two quality players to your squad and retaining the team that has won you so much over the last two years should see you challenging on all fronts this year.

Why? It is always very difficult for the players to mentally get that same fight and determination back that they had during a title-winning season.

For that reason, I can’t see Liverpool reaching the same levels.

I expect Man City to be rejuvenated and to beef up their squad again for the new season and they will be the team to beat.

Where will Liverpool finish? Champions, but very close

Why? I can’t see Liverpool dropping off, it’s just a case of whether or not anyone else can stay with them. Realistically, that’s Man City.

They are bound to be better than last season, but it is still a lot of ground to make up.

I think the title race will be between those two – Chelsea and Arsenal should also fare better and will make up the top four.

Where will Liverpool finish? Champions, as it stands

Why? If Man City bring in Kalidou Koulibaly that prediction might need revising.

I also think Chelsea will be close to the top two, given the signings they have made, but a lot of the bigger sides still appear to have sizeable gaps in their squads, whereas Liverpool don’t.

Why? I feel Liverpool are favourites to win the league again. Jurgen Klopp has been building this team to win for several seasons.

I have seen no evidence of a drop-off, and in fact, I would not be shocked to see them win multiple trophies this season.

Why? I’m backing them to retain the title, but expecting Man City to push them all the way. I feel as if the Reds will be too strong once again, though.

Why? Liverpool will win the league again this season. They have a settled side which I believe has at least another year before any departures or changes need to be made.

Man City haven’t resolved some major issues, in my opinion, namely Sergio Aguero missing games and issues at the back. 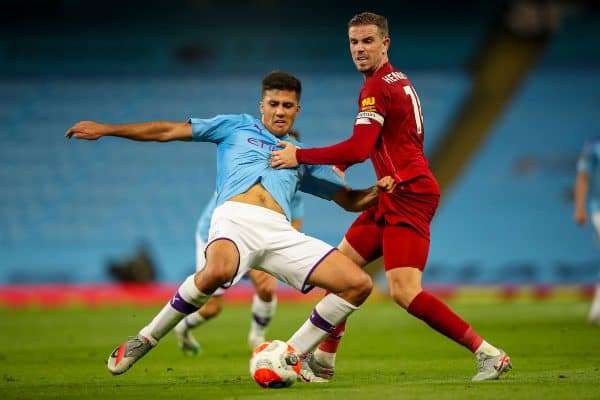 Why? As we have seen with Man City, it is nigh on impossible to maintain the levels of consistency, focus, drive and energy that bring the really eye-opening titles.

Plus, competition is hotting up.

Why? I think another top-two finish is on the cards, but it is hard to see this set of players maintaining the extremely high level they have set over the past two seasons, given the lack of a proper pre-season.

I understand fans wanting new signings, even if it’s to push the existing players and allow for more rotation, but the current squad still has the quality and cohesiveness to go again and try and retain the title.

Curtis Jones, Neco Williams and Rhian Brewster will add some much-needed freshness into the squad and Takumi Minamino will play a massive role after bedding into the club, as will Naby Keita, who will continue to improve.

There’s still not much behind Mohamed Salah, Sadio Mane and Robert Firmino, however, and asking them to go again may be one year too many.

For now, Man City having the bigger squad tips it for me, in what will be a very full-on season.

Why? My sense is that without adding firepower and real quality depth, this crammed-in season might make all the difference in the Reds slipping up more than the last two seasons.

Why? They will obviously be right up there challenging again, but will they be able to replicate last season’s remarkable season?

I think there will be a bit more pressure on them, with the wounded animal in City gunning for them and Chelsea spending money again like it is going out of fashion.

Why? Liverpool and Man City will be the top two teams again – the final positions will probably be decided by both teams’ performance in the transfer market.

If one team can pull off a game-changing transfer and the other can’t, they will have a huge advantage.

City’s disappointing season last year will be a massive motivation for them and the title race will be close as a result, but I think Liverpool will just pip them to the title.

Why? Liverpool won’t retain the Premier League title this season and will finish second.

Not a lot of teams manage to win back-to-back titles and the Reds will find out how difficult it is to do that over the course of the coming months.

Man City will be intent on regaining the trophy and I think they will do just that. 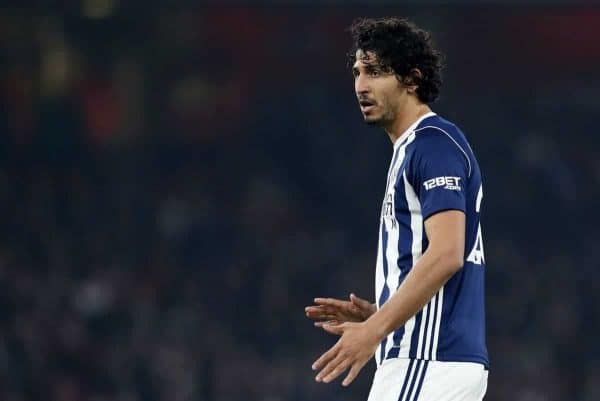 Why? I will get panned by your readers for saying this, but despite finishing 18 points clear of Man City last season, I don’t think Liverpool will retain their first league title in 30 years.

While Jurgen Klopp‘s team were so clearly the dominant force in the last campaign, and undeniably the best team, they did scrape through a number of tight games. I don’t see Liverpool winning as many of those knife-edge matches.

I think the Reds will struggle to find the same level of consistency in performance, especially when every team will be out to beat them as champions, and, conversely, I can see City putting together a more complete campaign than the one just gone.

I would potentially throw Chelsea into the title mix, too. Their recruitment this summer has been phenomenal, at least on the surface, and I fully expect Hakim Ziyech to be the most influential Premier League newcomer.

Furthermore, the return of West Brom, who have been something of a bogey side for Klopp, could also hinder Liverpool’s title defence!

Why? I can’t really say why, but I just think Liverpool were at their best last season and I’m not sure they can get better.

Why? Liverpool will be in a three-way tug-of-war in my eyes.

Retaining the Premier League title is almost impossible – and looking at Liverpool’s transfer window so far, it all seems pretty underwhelming.

Stuttering over the finish line in the league, in albeit unprecedented circumstances, coupled with a Community Shield loss to Arsenal, it’s not exactly the box-office end to the season/start of the new one many of us were expecting.

Chelsea‘s window has been impressive so far and Man City can never be written off – I think the Reds will finish second.