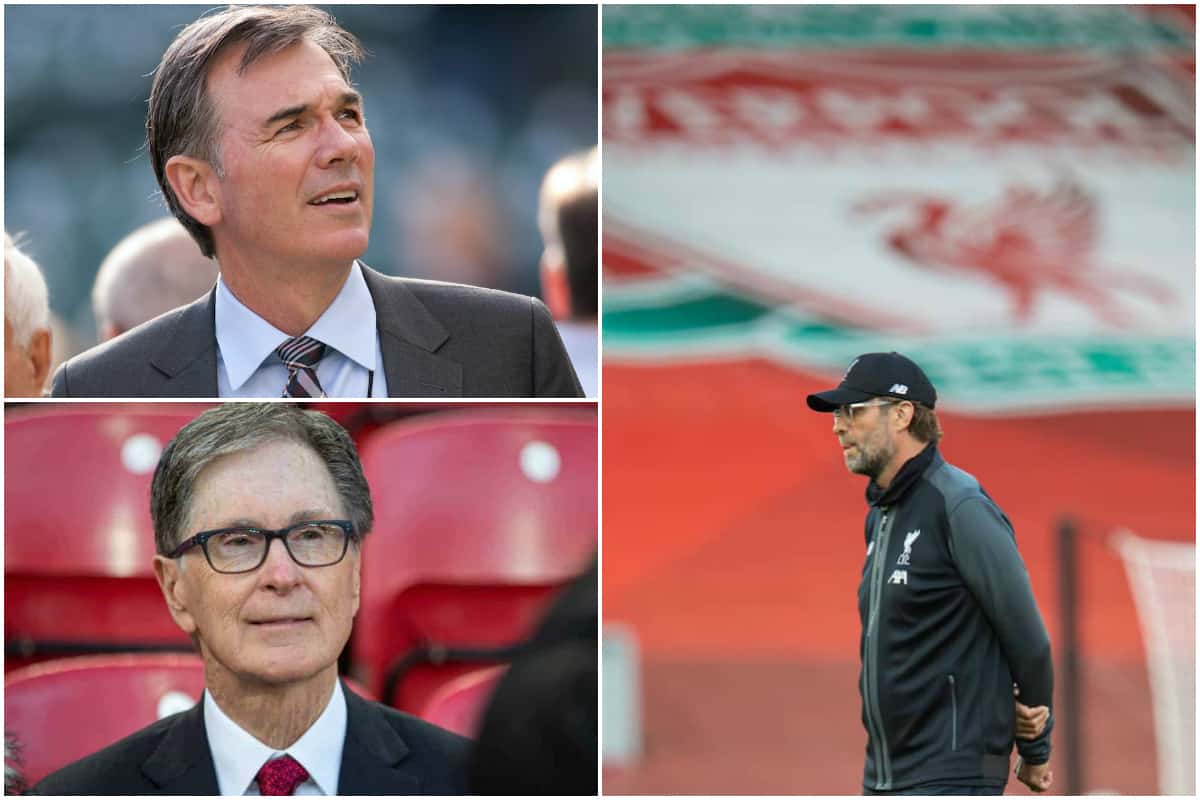 We’re almost there: the 10-year mark of FSG as owners of Liverpool FC is just around the corner. Taking into account recent headlines, it seems that far from the oft-repeated headlines suggesting they’re open to selling, Fenway are in fact just getting started.

Let’s not get all dewy-eyed about matters and stick to facts for a moment. They took over an absolute shambles, both in terms of a business entity and an on-pitch football team.

They got some big decisions badly wrong, some other calls strangely wrong, and a few which they thought were well-thought-out were, well, let’s say they fell wide of the mark in the jury of public opinion.

But slowly, gradually, they have become better at decision-making, better at putting people in place to make those decisions.

Cohesive strategies – in the boardroom, the recruitment sector, the commercial units and for the training pitch – have started to bear fruit.

They also snared Jurgen Klopp, the absolute masterstroke which has allowed all the rest of the strands to be woven into one fantastically-functioning web, with a big shiny Premier League trophy at the centre of it all.

Ten years it took, but they have delivered on that early promise to bring big success to the club, with the Reds becoming champions of everything under their guidance.

So what’s next? Quit at the top? More of the same? Neither of the above, perhaps. In fact, if we can jump on a few assumptions, an absolute Red empire seems to be the overall vision.

In it for the long haul 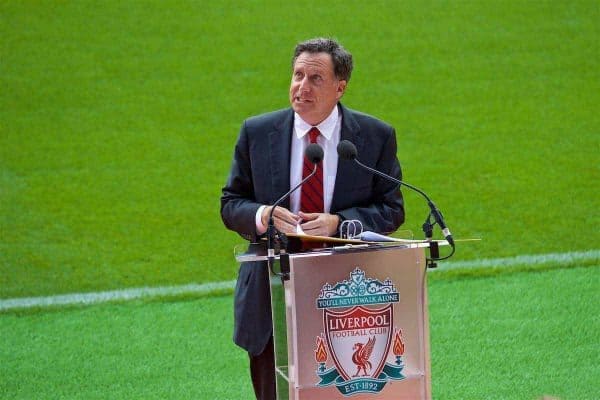 Two recent news revelations point to FSG’s plans not stopping with a league title or two.

The much-debated plans for a reshaping of English football, the Project Big Picture proposal, isn’t the brainchild of a thinktank who intend on leaving the story any time soon. It’s partly necessary alterations, partly designing the next wave of methods how they can increase income, focus on more lucrative competitions.

The Wall Street Journal broke the news about FSG mixing with RedBall, the company with Billy Beane on the board, and the Mirror‘s David Maddock goes further, reporting the two organisations are in “advanced negotiations” and that Beane, the Moneyball guru, will leave behind baseball entirely.

His role, Maddock says, would be to not delve into Liverpool’s player recruitment…but club recruitment.

He would work on finding suitable clubs for the public-listed company to purchase and run in the same way they currently do with the Reds.

The appeal here is clear.

Liverpool figureheads have long-since argued for B teams, or versions thereof, to be allowed. Rafa Benitez wanted it, Klopp has spoken of it, every youth coach has bemoaned the state of under-age football and the entry of an U21 side in the EFL Trophy over the past two seasons is an extension of the same principle.

Should ‘FSG RedBall’ come into being and buy up a couple more clubs, Liverpool have ready-made solutions to transfers in both directions: young players can go and get senior game time, while overseas talents can be signed up, trained and played in the style the Reds want, with a view on their long-term switch to Merseyside.

The Red Bull model, more or less, but instead of Salzburg to Leipzig to Liverpool and we pay five times higher the price, it could be rather more palatable to club finances, easier to keep tabs on players needing a work permit and maybe even more of a lure to those not quite ready for Anfield, but who would love to keep their options open for it in future. 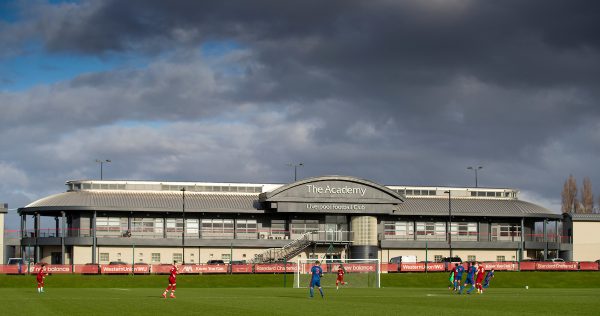 Just as this can easily be seen as a next adaptation of scouting and recruitment, so too is it a side-stepping of new rules.

You may have noticed one of the suggestions from Project Big Picture was to allow more players out on loan, especially to one single club. It’s not hard to make the connection of what the big clubs are aiming for: stockpiling talent again.

However, if you buy a club or five, you don’t need to loan them – just shuffle the contracts around from nation to nation as numbers and talent demand.

You’d be part of the Pozzo triangle, that’s how. The Pozzo family at one time owned Udinese, Granada and Watford and shifted their massive roster of players around to whichever club needed them most.

The player in question above is Adalberto Penaranda, a gifted and aggressive forward whose career has been rather wasted by the lack of actual progress since he was ensnared in the Pozzo net. He signed for Udinese in 2015 as a young Venezuelan youth player, moved immediately to Granada, then was sold to Watford four years ago, then loaned back to Udinese. He has never played in the Premier League and is currently in Bulgaria. On loan, obviously.

That’s the type of player hoarding and lack of welfare you’d hope Liverpool, or the extended family who could be built to feed the Reds, would avoid.

But what about picking the clubs themselves? Most of the Bundesliga absolutely hates RB Leipzig. Would that be an issue in England? Would Reds even stand for it for the parent company to buy another English side? We won’t speculate too wildly, because the possibilities are limitless, but how do you balance the community work the club are always at pains to point out…against buying a club in a nation with ongoing racial abuse problems within sport? Or further afield, where they might be human rights violations in the country? Where does the PR exercise and pitfalls with commercial expansion stop?

Questions for another day, perhaps.

But on the football side, few can argue that Liverpool FC are an exceptionally well-run club these days, and loads around the world would love to have the same opportunity, the same expertise, the same tie-ups. 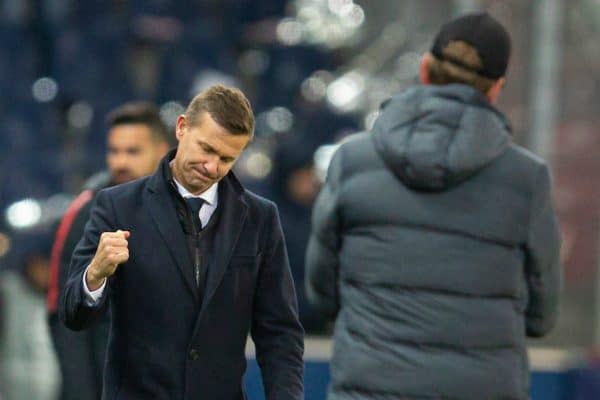 RB New York, Salzburg, Leipzig. Different words for the initials in some instances, but Jesse Marsch is proving they can be tied together successfully and offer a real pathway of development.

Imagine, for a moment, half a dozen clubs, a decade down the line, all playing the modern, aggressive, high-pressing, attack-minded style that Liverpool do now – or whatever the then-fashionable way is – and who we can essentially take our pick from to improve the squad.

A team of teams whose identity is their intensity.

Liverpool have to keep fighting against the tide, in terms of PSG’s state finance, Real Madrid’s freedom to bend the books with things like selling land for many times its value, Man City‘s bottomless pit of black gold investment.

This is one alternative means of keeping pace and staying ahead of the curve, financially and in a sporting sense.

Everyone wants to leave something worthwhile behind. Football managers, when they decide their time is up – the few who get to make that call themselves – want to leave a squad ready to continue success; family heads want to ensure their offspring are taken care of; outgoing businessfolk wish to hand over the reins with the accounts in good order, the company vision intact.

At some point, the people at the head of the FSG branch directly concerning Liverpool are going to have to do the same. Perhaps Henry, now aged 71, and Werner, 70, hand over the corridors of power to Billy Hogan, in his mid-40s.

Whatever happens, our principle owner and chairman will want something big to work on now, and to leave behind – and a long-lasting recruitment chain could be exactly that.

For FSG, they’ve already achieved much of what they set out to do, but it’s abundantly clear that they aren’t stopping at those first batch of objectives.

Decade one is done on Thursday. Decade two might have just as many slip-ups as the first one did, but since we’re starting from a much higher vantage point, you’d also expect the success levels to be correspondingly huger.

Bring on that silverware.