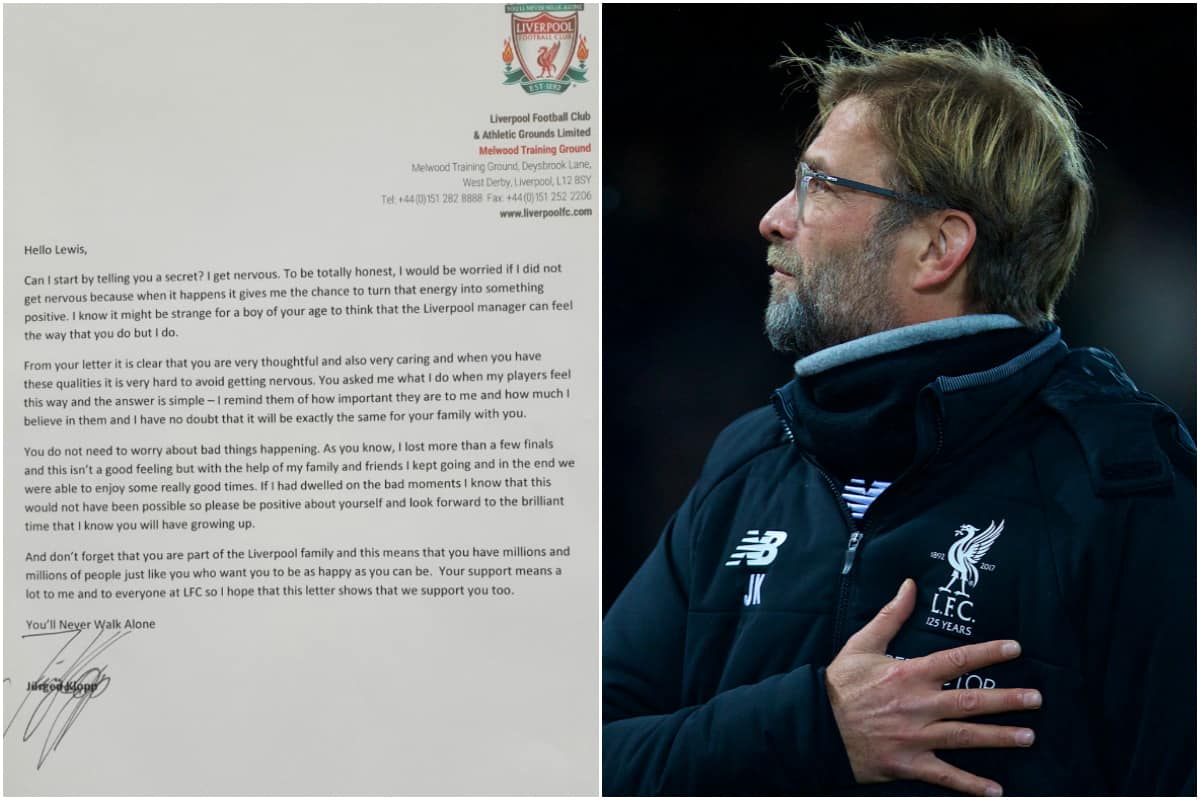 Jurgen Klopp has sent a heartwarming letter to 11-year-old Liverpool fan Lewis Balfe, who wrote him to share his struggles with anxiety ahead of starting secondary school.

Lewis was among the many children who made the move up from primary to secondary school last month during a strange time over the world.

With the UK having been locked down to varying extents since March, many children have been deprived of physical contact with friends and those of a similar age over the past seven months.

After a family friend suggested writing to one of his heroes to share his concerns, Lewis sent a letter to Klopp at his office at Melwood.

Last week, Lewis came home to find a letter, with the Liverpool FC logo in the top corner, addressed to him and signed by Klopp himself. 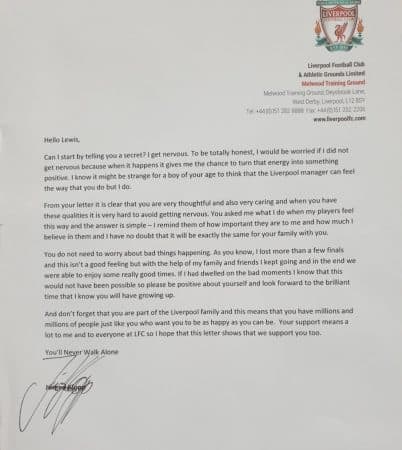 “Hello Lewis, can I start by telling you a secret?” the letter read.

“I get nervous. To be totally honest, I would be worried if I did not get nervous because when it happens it gives me the chance to turn that energy into something positive.

“I know it might be strange for a boy of your age to think that the Liverpool manager can feel the way that you do but I do.

“From your letter it is clear that you are very thoughtful and also very caring and when you have these qualities it is very hard to avoid getting nervous.

“You asked me what I do when my players feel this way and the answer is simple – I remind them of how important they are to me and how much I believe in them and I have no doubt that it will be exactly the same for your family with you.

“You do not need to worry about bad things happening. As you know, I lost more than a few finals and this isn’t a good feeling but with the help of my family and friends I kept going and in the end we were able to enjoy some really good times.

“If I had dwelled on the bad moments I know that this would not have been possible so please be positive about yourself and look forward to the brilliant time that I know you will have growing up.

“And don’t forget that you are part of the Liverpool family and this means that you have millions and millions of people just like you who want you to be as happy as you can be.

“Your support means a lot to me and to everyone at LFC so I hope that this letter shows that we support you too.

Lewis’ mother, Milena, told the Liverpool Echo that her son was “quite overwhelmed” and “in complete shock” at receiving the letter from Klopp, which is now framed and on display on his desk.

“I think it’s something he will go back to, and keep the letter when he’s older,” she said. “If he does get anxious, I hope he will read what Klopp told him and it will help.”

This is yet another example of the selflessness of the Liverpool manager, who has shown throughout his time in charge at Anfield that he genuinely cares about each and every supporter.

It is perhaps a rare trait, and Klopp’s letter will undoubtedly be cherished by Lewis for years to come.