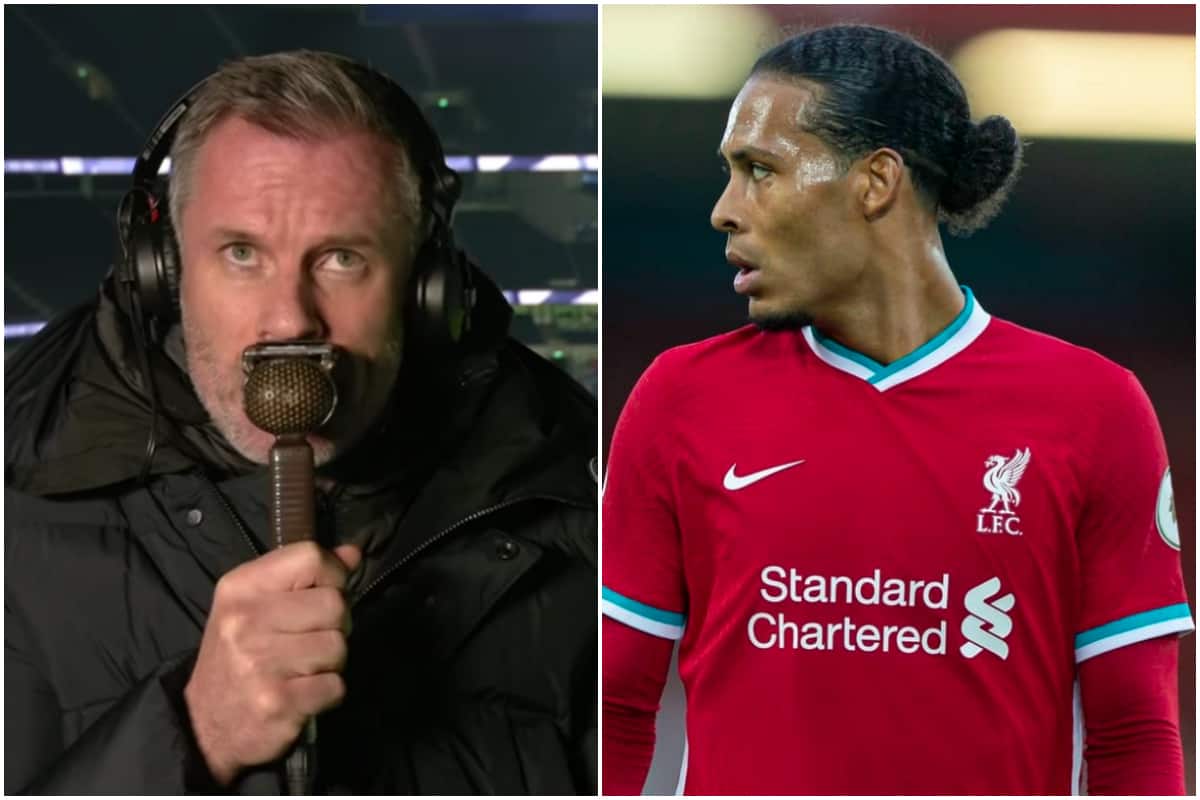 The injury to Virgil van Dijk means Liverpool need to head into the transfer market in January, in the eyes of former Reds centre-back Jamie Carragher.

The Dutchman’s absence over the long term leaves Jurgen Klopp with just two senior defenders to choose from, in Joe Gomez and Joel Matip.

However, both have had their own fitness issues in the past and Carragher isn’t convinced they’ll have the resilience to last out the entire season filling in for Van Dijk—and the depth thereafter is non-existent, meaning either midfielders dropping back or inexperienced youngsters being handed a chance.

While Jurgen Klopp will have no enormous problem employing both techniques, with the likes of Fabinho and Nat Phillips options for example, the chances of sustained Premier League success is clearly diminished without a huge presence at the back.

Carragher says Van Dijk is so fundamental to the Reds’ approach that a move on the first day of the January transfer window is a must, leaving the club two-and-a-half months to make their pick of which player suits their requirements best.

“Every title-winning team has three or four players and if one of them are missing, you can’t cover for them – they’re outstanding,” the former No. 23 said on Sky Sports.

“It blows the title race wide open. Liverpool were the team to beat and with Van Dijk out for what looks like the whole season, it’s going to be all on.

“I think Liverpool certainly have to go into the market in January.

“Not just because of Van Dijk’s injury but Liverpool were weak in that area anyway. They lost [Dejan] Lovren before the start of the season and the other players in those positions are injury-prone.

“It’s devastating for Van Dijk but for Klopp and the club, right away it’s ‘who can we get in?’ I know the transfer window is just finished but they have to be ready on January 1 to bring someone in because they’re really weak in that area and that could stop them going on to achieve what they want to achieve.”

The Reds might have been likely to make a big-money defensive signing next summer anyway, so the alternatives would be to either bring forward this signing, pay big money mid-season to buy a new first-choice option who could be a long-term partner for Van Dijk, or else look to provide half-season cover with a loan addition for Klopp.

Of course, there’s always the chance that in the meantime one player or another really steps up in unexpectedly impressive fashion, and this is likely to be a final foot in the door to the first team for the likes of Phillips.