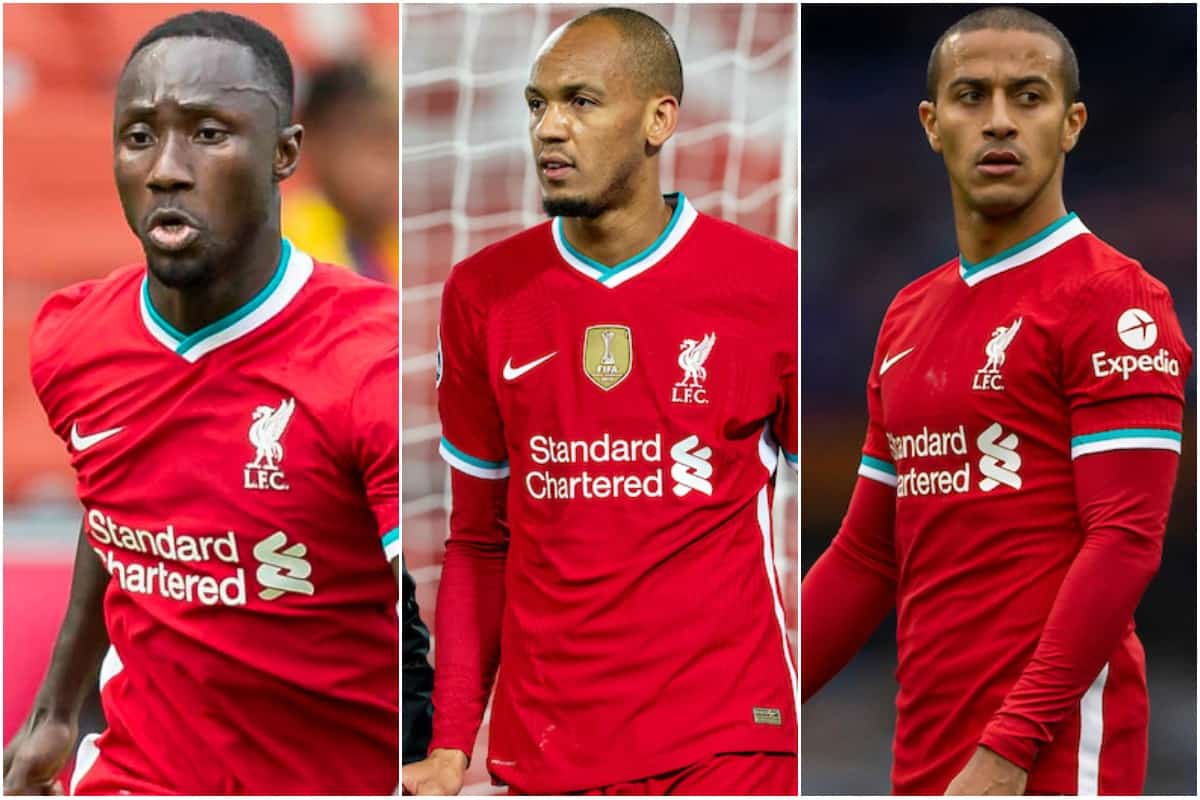 Jurgen Klopp remained coy on the severity of Fabinho‘s hamstring injury, simply stating he will be out “slightly longer” than the weekend and it’s touch and go for Thiago against the Hammers.

It’s been a testing start to the season for Liverpool with a multitude of injuries and positive COVID-19 tests to navigate, primarily in defence and midfield.

With the exception of Virgil van Dijk and Alex Oxlade-Chamberlain, the Reds have faced a series of short-term setbacks to key pillars and new arrivals.

Fabinho was the latest to be struck after pulling up with a hamstring injury in the first half of the win over Midtjylland on Tuesday, a match missed by Thiago, Joel Matip, Naby Keita and Kostas Tsimikas.

It leaves the Reds scarcely covered at centre-back ahead of West Ham’s visit on Saturday, and ahead of the game, Klopp provided a coy update on his captain, Fabinho, Thiago and Keita.

“Jordan Henderson not a fitness problem. Responsible maybe the better word. I can count the games he can play and we have to try to get through this period,” Klopp told reporters in his pre-match press conference.

“The schedule has been that October has been like a usual December, November is like December and December is December so that means it’s intense, hectic. We have to make these kinds of decisions.

“Boys are ready to go, Fab is not in he got a little injury so he will be out for the weekend and slightly longer.

“Both [Thiago and Keita] are in a good way, that’s how it is with recovery. You saw the incident with Thiago and that needs a little time to settle, no one can tell us exactly how long because nothing is ruptured or broken.

“But he’s desperate to make the next steps, but if he will be ready for tomorrow we will see.

“Same for Naby just different kind of injury. In an ideal world you give them time to prepare not only for one game but for the next 30-40 games so if someone is in training again it does not mean you can use them immediately.

“Sometimes we have to but as much as we can try to avoid it we should.

“I don’t feel a rush with the boys, we have meetings every day with the medical department and they tell me how it looks and that’s the information I work with.

“I cannot rush it and I’m not in a mood to do it so I just make sure we make the best of the situation with the available boys.”

Alisson, Oxlade-Chamberlain, Matip, Tsimikas, Henderson, Van Dijk, Keita, Shaqiri, Alexander-Arnold, Fabinho and Thiago have all been out of action throughout the season to date, with the Reds handed more than their fair share of setbacks.

Such a list is worrisome at the best of times let alone only 10 games into an unforgiving season, and so the Reds will need to continue to dig deep to keep positive results ticking over.

And Thiago‘s return, if only the bench, on Saturday could provide another timely boost as Liverpool play out the final three games before the November international break.