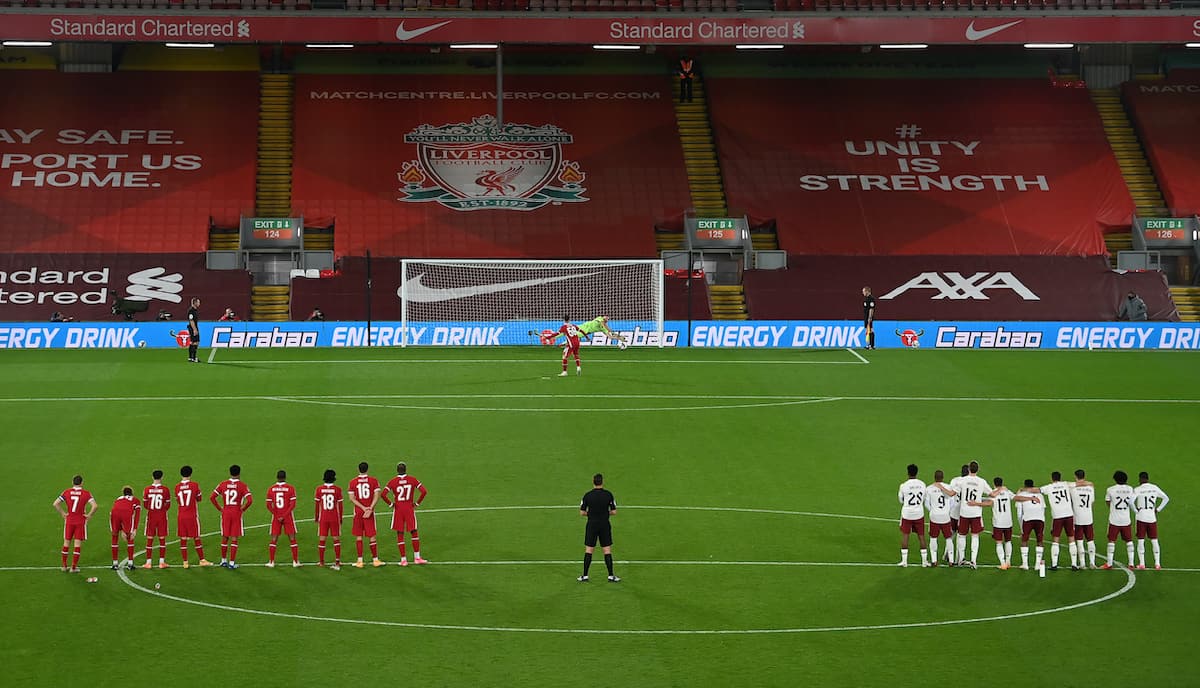 Liverpool exited the League Cup on penalties after a goalless draw against Arsenal in the fourth round at Anfield.

There were some surprise inclusions in Liverpool’s team, with Mohamed Salah and Virgil van Dijk included and Harry Wilson making his first start for the club almost four years after his debut appearance as a sub.

Also making his first start for the Reds was new signing Diogo Jota, after two sub appearances in the last week.

Not included was Xherdan Shaqiri, who impressed in the last round at Lincoln but is now subject of transfer interest.

Arsenal had the better of the early exchanges, with Eddie Nketiah being denied by a smart save from Adrian, but the first half itself lacked any real opportunities for either side.

Liverpool’s first shot on target only arrived when Curtis Jones hit a weak effort with his left foot from distance in the 34th minute.

Stoppage time in the first half almost saw the breakthrough broken though, when Jota’s header was parried by the Arsenal keeper and Takumi Minamino‘s follow up rattled the crossbar.

A change in plan saw Klopp make no subs at half-time, with the manager having said pre-match that he planned to swap Van Dijk at the break. The centre-back was eventually replaced by Joe Gomez on the hour, with Salah departing for Divock Origi.

You could have been forgiven for forgetting Salah was even on the pitch, and the use of him in this competition seemed strange.

Liverpool were more attacking in the second half and went close through Van Dijk and Jota before the hour but lacked the breakthrough.

A low shot from Grujic, who impressed throughout, and then an effort from Jota forced Leno into two saves as Liverpool continued to up the tempo.

Arsenal‘s best chance arrived when Holding had a free header from a corner but Adrian made a smart save to deny him.

After nine goals in last week’s League Cup tie at Lincoln, this was the opposite of such excitement and looked bound for penalties for long periods of the second half.

This game last season at the same stage of the competition ended in a 5-5 draw and here it once again it went to the spot-kicks but this time with a different outcome and far less of the drama beforehand.

Next up: Aston Villa (Away, Sunday 4 October)