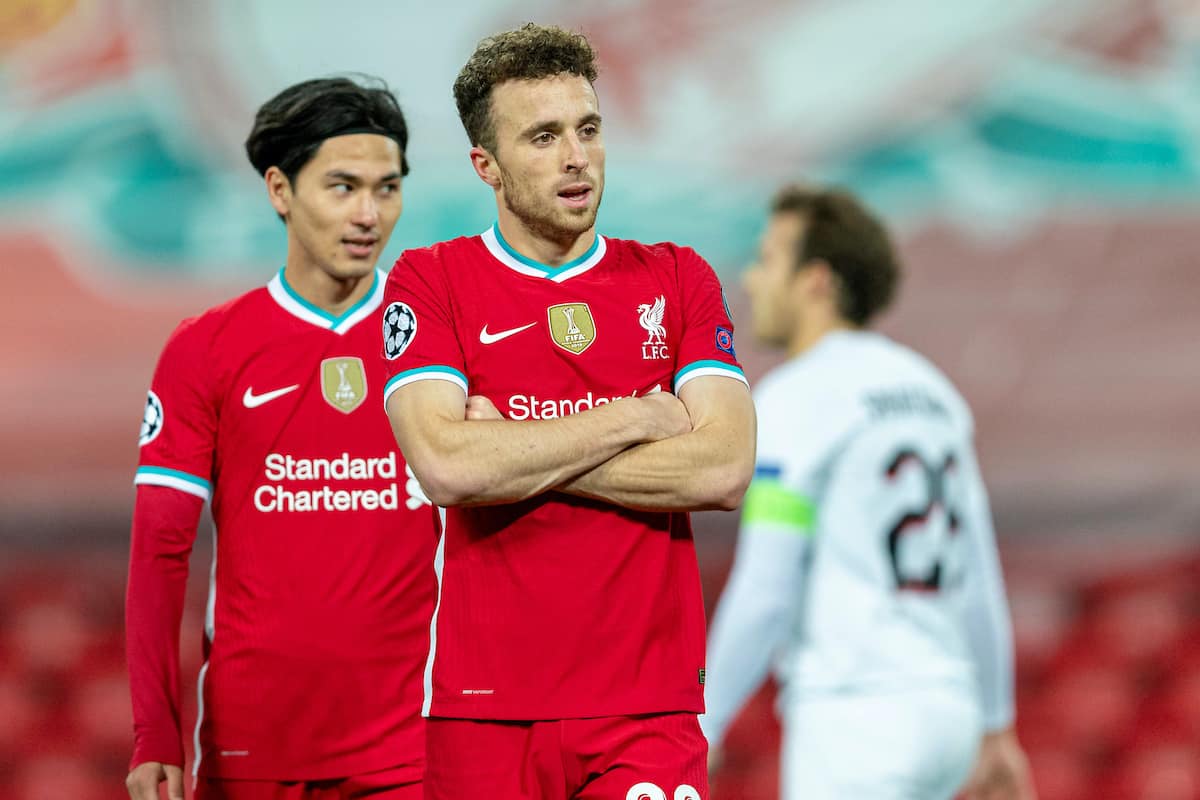 Diogo Jota scored another goal for Liverpool, the 10,000th in the club’s history, to seal a slim but comfortable 2-0 victory over Midtjylland in the Champions League at Anfield.

With Jurgen Klopp resting his first-choice front three and with no fans at Anfield for the first time in the Champions League, it was a quiet start to proceedings against Midtjylland.

A combative effort from James Milner and the quality of Trent Alexander-Arnold crafted a number of opportunities, but with Jota arguably out of position on the right flank the chances were few and far between.

The Reds were handed a big blow just before the half-hour as Fabinho pulled up off the ball with a hamstring issue, and with both Virgil van Dijk and Joel Matip out, it was left to Rhys Williams to come in for another outing in Europe.

Liverpool’s first shot of note came with six minutes left in the half, with Milner’s right-footed effort blocked following a smart through ball from Xherdan Shaqiri, while later on Takumi Minamino should have done better from Alexander-Arnold’s cross.

The half-time whistle came as something of a relief for those watching on, and likely Klopp too, as the break allowed him to address his squad after a disjointed and largely full 45 minutes.

Klopp opted for a change at the break, and it was a pre-planned one as Jordan Henderson came off and Gini Wijnaldum came on, while there was a reshuffle in attack as Jota went out to the left.

The Portuguese’s change of position allowed him to be in the right place at the right time to score the 10,000th goal in the history of Liverpool, tapping in at the far post after great combination play between Shaqiri and Alexander-Arnold.

It then came time to introduce the big guns, with Mohamed Salah and Sadio Mane replacing Minamino and a particularly ineffective Divock Origi, who may well have wasted a rare chance in the starting lineup.

Liverpool looked to settle with a measured passing game, allowing Williams to gain confidence alongside Joe Gomez, but it resulted in another tedious run of play from the champions of England.

Fortunately, a late, late penalty gave Salah the opportunity to extend the lead, with the Egyptian stepping up to make it 2-0 and another victory.