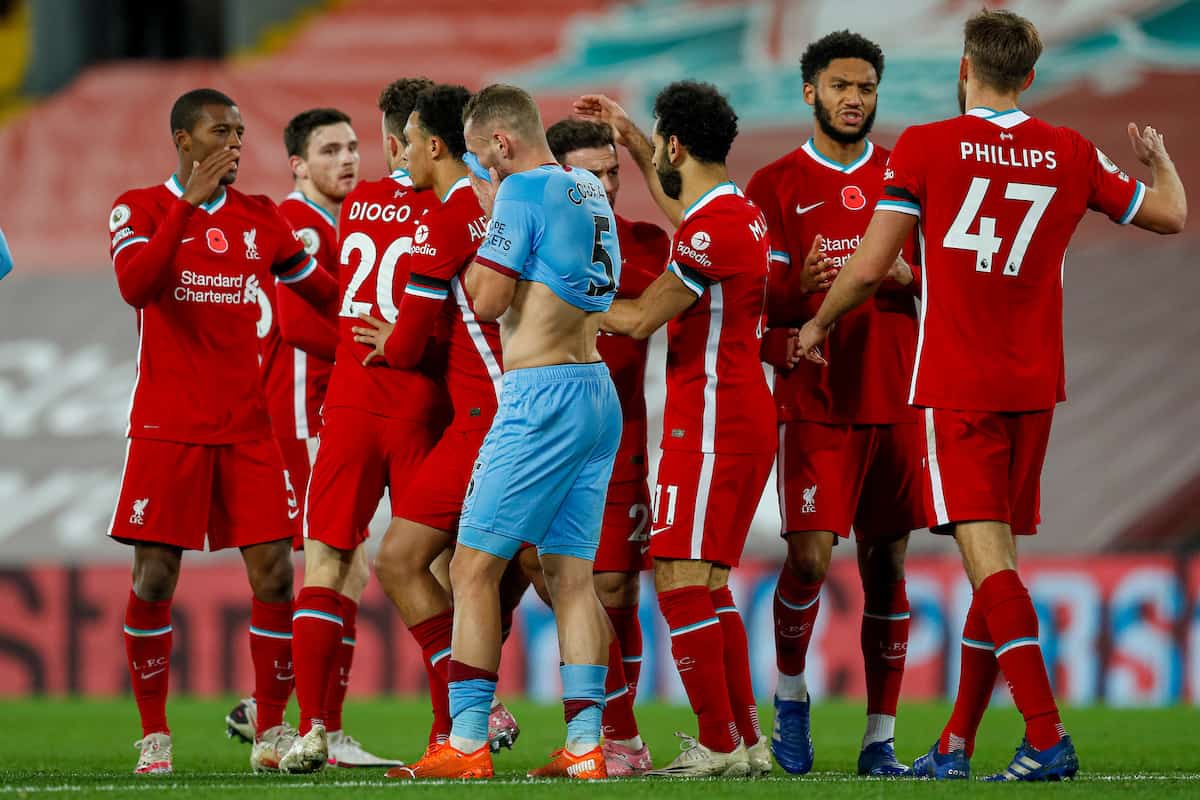 Liverpool yet again conceded first…but yet again produced another comeback win to beat West Ham 2-1 at Anfield on Saturday.

No secrets about why Nat Phillips was selected here: with eight minutes on the clock he had won two headers, lost one aerial battle, committed a foul and got enough on a cross to divert it behind for a corner.

He was aggressive, showed good judgement and made sure Seb Haller knew he was a strong aerial presence right from kick-off.

A first-half showing suggested none of his inexperience at this level, with just a single misstep: an attempted tackle out of the Lovren/Skrtel playbook, jumping around the front of a forward for a ball he couldn’t possibly win and letting the opposition break behind him as a result.

That aside, he was solid, reliable, diligent in his passing, alert to runners around him. He had won three headed challenges by the break and cleared the ball more time than any other Red – a 45 minutes to build confidence, in himself and in those around him. And those watching on TV, perhaps.

Second half, he had perhaps another one moment which saw the lack of understanding between himself and Gomez, but he remained well-positioned, reliable with his clearances and won two thumping headers late on to help preserve the win.

Surely this was his 100th game in the league, not his first?!

Most games this season have shown the same pattern for Liverpool: a frustratingly slow start, a real lack of movement and incisive passing and, inevitably, the need to step it up after the opposition threaten or take the lead.

There are more factors at play there than we can go into in a couple of paragraphs but chief among them are a lack of pre-season, no crowd, so many injuries and changes in midfield and the constant, relentless run of matches which just need to be ground through in whatever way the players can.

It’s possible that the boss has reigned them in from the start too, though unlikely, given how much energy he expends telling Liverpool to play quicker.

The pressing in a six-man unit is gone for now, though, and without it Liverpool must construct from deep with their own passing and movement – and that’s irritatingly absent after kick-off, too.

Static forwards and midfielders one-touch passing the way they face when receiving play is not conducive to opening up defences which come to sit and frustrate.

Gini Wijnaldum, utterly exceptional on the day, gets an exemption from this aforementioned affliction.

Thankfully, the Reds possess the subs this term to push those underperforming and change the game…

Jota on the mark

The calls for changes will get louder now, and with some reason.

Diogo Jota won the game against the Blades with his second-half strike and did exactly the same here – after coming off the bench. He hasn’t yet been a regular starter since his move, but Jurgen Klopp will no doubt be impressed with how quickly he has hit the ground running.

So, should he start? There’s a case to be made for Firmino coming out, certainly, with his performance level below-par again and his finishing wayward in midweek – but as Jota pointed out straight after full-time, he has already started twice recently and it’s a squad game.

There will be many chances ahead for him and the best thing for the Reds is that they have options beyond shoving Origi left wing: a change in system, a different striker, fresh, faster legs off the bench.

Klopp will no doubt suggest Firmino’s running and movement contributed to tired minds and legs in the Hammers’ defence, which led to the subs combining in such fantastic and ruthless fashion, and perhaps he has a point.

Another Anfield record in sight 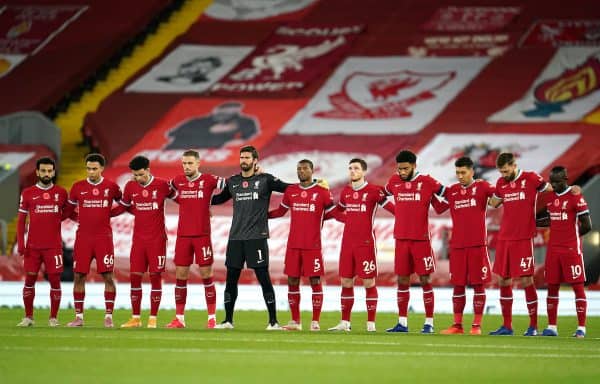 It’s 63 without defeat at Anfield in the league now, making Klopp’s greats the equivalent of Bob Paisley’s legends.

We can set an entirely new unbeaten run record against Leicester after the international break by avoiding defeat, though of course it’s eyes on the prize as far as Klopp and the squad goes.

Consistency is everything in a campaign where there will inevitably be stupid results and performances lacking cohesion.

Onto the biggest of challenges

Relentless – not just the Reds, but the run of games.

Now it’s back into Europe for the toughest game of all, away to Atalanta. The Italian side are a free-scoring, three-at-the-back, fun-to-watch side who went far deeper into the Champions League last season than the Reds did.

They’ve been inconsistent this term, but remain dangerous and can beat the best – which also goes for our next opponents after them, Man City.

Two wins would be an unbelievable return. Avoiding defeat in both could be just as enormous over the long term.