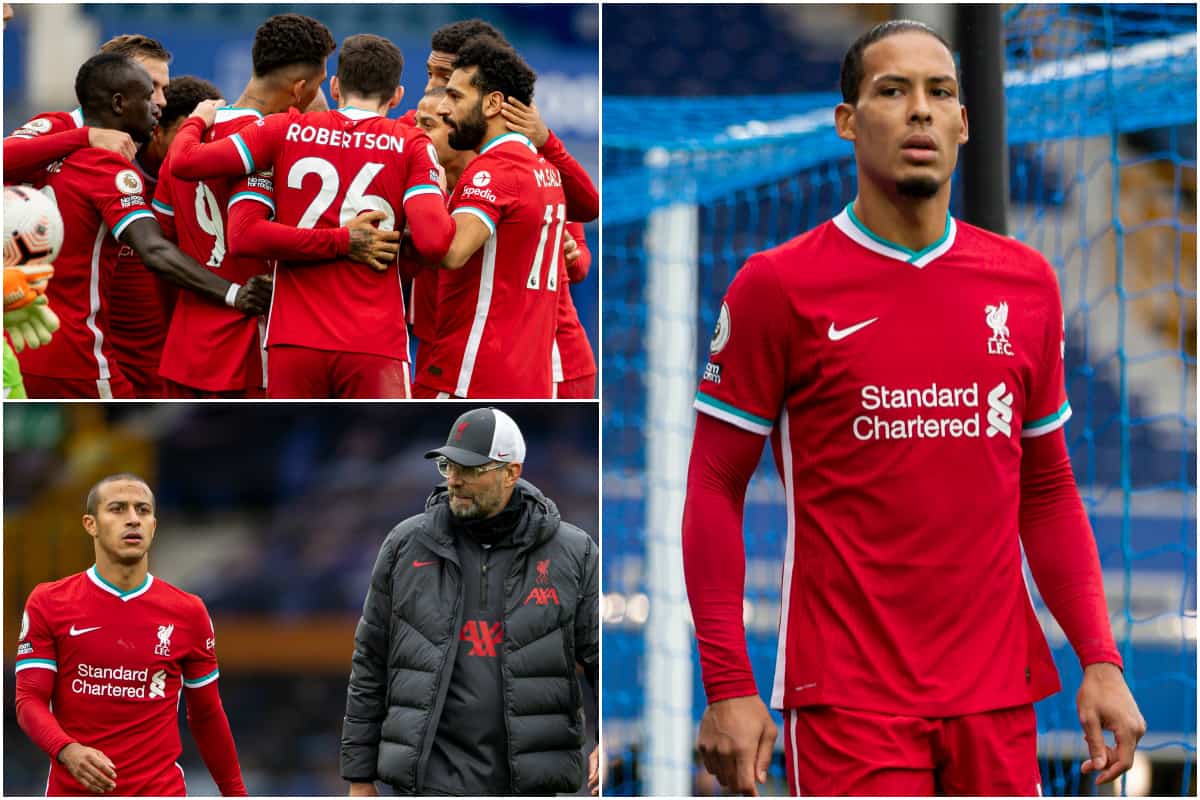 Liverpool’s return to action after the international break was not short of drama, with goals, injuries and VAR to discuss after a 2-2 draw with Everton at Goodison Park.

The Reds were robbed in the Merseyside derby, with Jordan Henderson‘s stoppage-time goal ruled out for a questionable offside to ensure a share of the points.

Sadio Mane had put Liverpool ahead early on, before a nasty challenge from Jordan Pickford forced Virgil van Dijk off and Michael Keane equalised with a header through the weak palms of Adrian.

A stunning strike from Mohamed Salah restored the Reds’ lead, only for Dominic Calvert-Lewin’s towering header to restore parity.

Richarlison was then sent off for a studs-up tackle on Thiago, and the Spaniard’s pass was then adjudged to have found Mane’s elbow in an offside position, ruling out a Henderson finish and a deserved victory for Liverpool.

To debrief – and vent – after those 90-plus minutes at Goodison, Jack Lusby (@jacklusby_) was joined by Matt Ladson (@mattladson) and Henry Jackson (@HenryJackson87) to talk the derby, the use of VAR and the injury fallout.

MATT: This is what’s frustrating because 95 percent of what Liverpool did was good, or very good.

That midfield three is and would be my preferred ‘best midfield’ so it was superb to see it in action, and up until Thiago‘s injury it was exciting to ponder them three working together and really forming a midfield that would be elite.

We bossed the game in all honesty, looked very fluid in midfield and attack – especially in the first half – and should have walked away with a very comfortable win had it not been for the incompetence of things beyond our control.

HENRY: The main positive is that there was a clear response from the embarrassment that took place at Aston Villa – I thought the overall performance was really good.

Liverpool made a superb start and it was only Van Dijk’s injury that stopped their rhythm. Had that not happened, I think the Reds could’ve run riot potentially.

In terms of individuals, I thought Henderson and Thiago were the clear standouts.

Henderson showed exactly how important he is to this side, not only setting the tempo and pressing relentlessly but showing such quality in possession, too.

He is one of the most important players at the club, even if slightly lower down ability-wise.

I am gutted for him that he was robbed of an iconic moment at the end, which would’ve been a just reward for his display.

Meanwhile, Thiago was a joy to watch. He plays passes that the vast majority of footballers can’t even see and he grew into the game massively. By the end, he was running the show.

A word of praise of Salah, too. To get to 100 goals in such quickfire fashion sums up how special he is, and he looked on it from minute one, even though not everything came off. Mane was good, too.

It’s also worth noting that Liverpool drew, too. They didn’t lose. As a result that’s absolutely fine, especially considering Everton‘s form going into the match.

JACK: Looking at the performance in isolation, there was so much good about how Liverpool played.

Robbo has been our best full-back so far this season, and to see him able to reprise his double act with Mane was a joy to watch, while as Matt mentioned, the balance of the midfield was spot on.

There was no need to wait to throw Thiago into the mix, as he’s a world-class player, and I’m glad Klopp hasn’t – he already looks like one of our best players.

And let’s not forget Salah. That finish was sublime, out of nowhere, and given it was his 100th for the club, making him the first to hit a century in over a decade and the fastest since Roger Hunt in 1963, deserves recognition.

What a player, and what a team. It’s just a shame factors out of their hands conspired against them…

MATT: Like Klopp, I was in favour of technology in football but in this current implementation, it just isn’t working.

It’s killing the game. That sounds cliche and perhaps hyperbole, but it is absolutely true.

Look at the players in post-match interviews, they hate it. I’ve spoken to one Liverpool player who told me that too.

If you had never watched football before and somebody introduced you to the sport with that game you’d wonder why the f**k you’d bother. I doubt you’d want to watch again or get into the sport.

People (seemingly even the officials themselves) forget that the main priority for referees is to ensure the safety of the players. Above all else, above getting the right decision.

So what on earth is David Coote doing by ignoring the Pickford challenge on Van Dijk? Such incompetence, putting the people you are meant to be protecting in danger would get you sacked in most professions.

HENRY: It’s laughable, isn’t it? I still cannot believe that the goal was disallowed.

I try and be as fair as possible as a fan, and not show too much bias in Liverpool’s favour, but that is up there with the most inexplicable VAR decisions in history. He is level, he is not offside. It really is that simple.

I also think it just summed up everything terrible about VAR. It takes away the human element of being a football fan, and that raw emotion of your team scoring a goal.

I was punching the air in delight when Henderson ‘scored’, but the whole time there was an element of doubt in my mind because I knew it was a tight call with Mane. That’s no fun.

Every team will be robbed by VAR and benefit from it, in fairness, but to say that Saturday’s incident feels like an injustice would be the understatement of the century.

JACK: What more is there to say? It is complete and utter ineptitude from an official, in Coote, who has only been trusted to referee 30 Premier League games in his career so far.

Liverpool have history with Coote, namely the 1-1 draw with Burnley in July, when Robbo and Klopp laid into him after the game for missing a clear penalty.

It would be remiss to suggest that there was any grudge against the club, of course – it’s not only Liverpool he’s made high-profile mistakes with, and it would be no surprise if he was given a ‘rest’ next weekend.

Beyond that, the application of the ever-changing handball and offside rules baffles me. It is only complicating the game further, when the technology was designed to make things clearer.

And the injuries…how concerned are you?

MATT: Obviously very concerned, and I am dreading both Thiago and Van Dijk having extended spells out.

I’ve resigned myself to Van Dijk being out until 2021 at the least, but really hope Thiago is more in the four to six weeks out bracket.

If Thiago was OK, I’d be happy enough with Fabinho at centre-back and Thiago as the deepest midfielder, and we have plenty of other midfield options.

But without Thiago it’s a huge concern, not least because of how many games there are.

These next three are within seven days of each other. We could do with positive results in all three just so the players themselves don’t get concerned about life without Van Dijk.

That particularly applies with Van Dijk, who I think is not only Liverpool’s most important player, but also one of the most influential players in the world now.

A big part of Liverpool’s great success has been Van Dijk playing almost every single game since joining nearly three years ago – all of a sudden, the Reds are facing a long spell without him.

Without being too hyperbolic, a long-term absence for him – I expect him to be out for many months – really could end up being the difference between Liverpool winning and not winning the Premier League title this season.

Thiago has showed in one-and-a-half games what a special player he is, too, so an extended absence for him will also hit Liverpool hard. They have nobody else like him.

That midfield three of Fabinho, Thiago and Henderson had an absolutely perfect balance of it, but all of a sudden it looks as though the Spaniard will be out for a while. Sad times.

Let’s all keep our fingers crossed and hope both of them aren’t out for too long.

One last thing: Jordan Pickford and Richarlison are a disgrace. There’s making honest tackles that end up being bad and then there’s just being a nasty piece of work. They are both the latter.

JACK: In short, very. Fingers crossed, but it doesn’t look good for Van Dijk; for a player with superhuman fitness, it takes a lot for him to even need subbing off.

Without Van Dijk, I think Liverpool have a big problem: Gomez’s form has been patchy for months and it’s a lot to ask of Matip to stay fit for an extended period while starting every game.

If they can address their respective issues, Gomez and Matip would be an excellent pairing for Liverpool, but I’d be inclined to agree with Matt and suggest Fabinho would be better alongside Matip at this point.

The issue there, of course, is if Thiago is out too.

Gini may be a wild card in the No. 6, but without Thiago, Fabinho is an essential starter in the role, which then leaves Klopp short another centre-back.