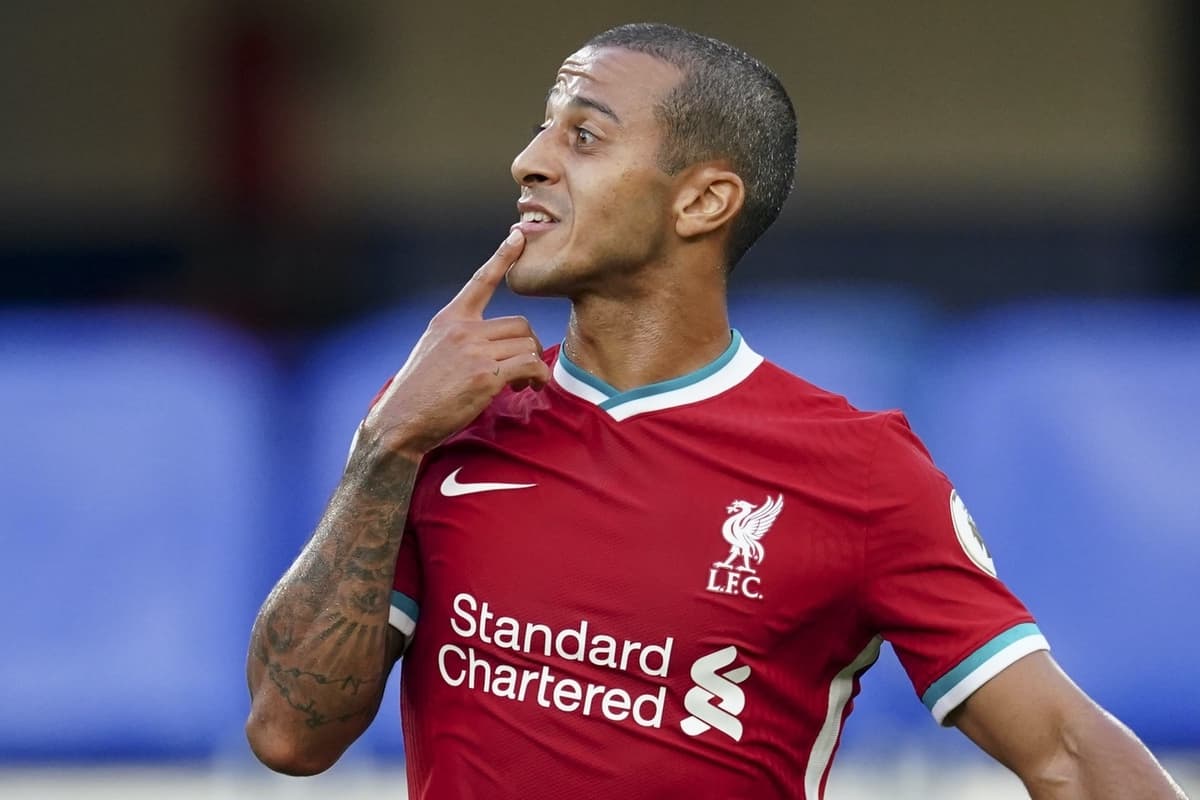 Thiago is in line to make his full Premier League debut for Liverpool as the Reds look to immediately bounce back, with Jurgen Klopp handed a boost to his options at Everton.

The Reds left things on a sour note last time out as an uncharacteristically lacklustre outing led not only to a hiding but to a 13-day wait to rectify it.

And now one of the biggest fixtures in the calendar presents an opportunity to bounce back, but it will be far from straight forward against a high flying unbeaten Everton side.

Carlo Ancelotti’s men have recorded victories over Tottenham, West Brom, Crystal Palace and Brighton and will now welcome Klopp’s side full of confidence.

A wounded Liverpool outfit intent on returning to winning ways will arrive at Goodison Park, however, and the manager will be able to field a strong XI in an attempt to do so.

After a number of scares throughout the international break, it is largely positive news for Liverpool on the injury and illness front.

While the major setback continues to be the absence of Alisson with a shoulder injury, who Klopp revealed has “made big steps” in his recovery, Jordan Henderson and Joel Matip have both successfully recovered from respective injuries to put their hand up for selection.

The skipper started his work to return to match fitness with England after sitting on the sidelines since the win over Chelsea, while the latter has rejoined training after a similar length of absence.

Thiago and Sadio Mane, meanwhile, have both successfully recovered from coronavirus, while the club has resisted comment on Naby Keita who was reported to be the latest to test positive during the international break.

But Liverpool’s No. 8 will be on the sidelines for Everton alongside long-term absentee Alex Oxlade-Chamberlain, while Kostas Tsimikas is also expected to be unavailable after a continued training absence.

Beyond that, with the early return of Fabinho and Roberto Firmino and no further setbacks from the international stage, the boss has a strong hand to play on Saturday.

After a midfield display lacking pressure and intensity at Villa Park, Klopp could make two changes in that department by injecting a workhorse in Henderson and the ingenuity of Thiago.

The latter would be making his first start for the club and would operate ahead of Fabinho, who will retain his place in the No. 6 role and should head into the clash fresh after not playing a minute for Brazil.

It, of course, means Gini Wijnaldum is squeezed out to make space, but he will provide a valuable option from the bench alongside the versatile James Milner.

Further afield, Diogo Jota could miss out despite his scintillating displays for Portugal in order to reunite the trident of Mohamed Salah, Firmino and Mane – who have started together in just one of eight meetings against Everton, back in December 2018.

And despite a torrid defensive display last time out, the back-five could be given a chance to redeem themselves in a side that looks like this: 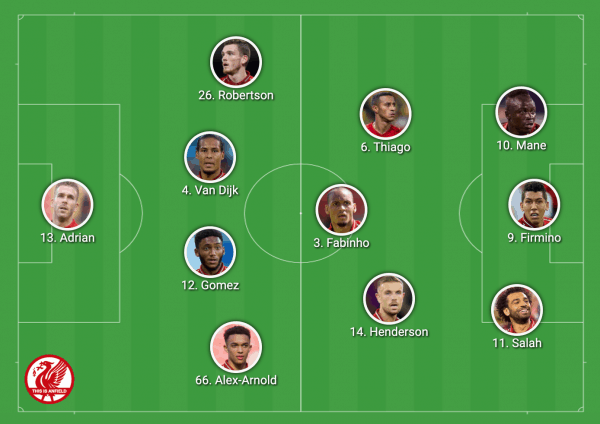 The return and form of key players, however, could dictate Klopp’s approach in all departments and result in five changes with the flexibility to then switch to a 4-2-3-1 at any stage.

Here, Adrian would continue between the sticks but would instead find the returning Matip sat ahead of him in the defensive line alongside Virgil van Dijk – reuniting the duo from the off for the first time since the last meeting with Everton back in June.

In midfield, Thiago and Henderson would be joined by Wijnaldum for a dynamic trio who can each effectively rotate through any of the three positions – where in this case, the captain would sit in the holding role.

And with Firmino having shown signs of mental and physical fatigue prior to linking up with Brazil, Takumi Minamino could therefore be handed his chance to lead the line: 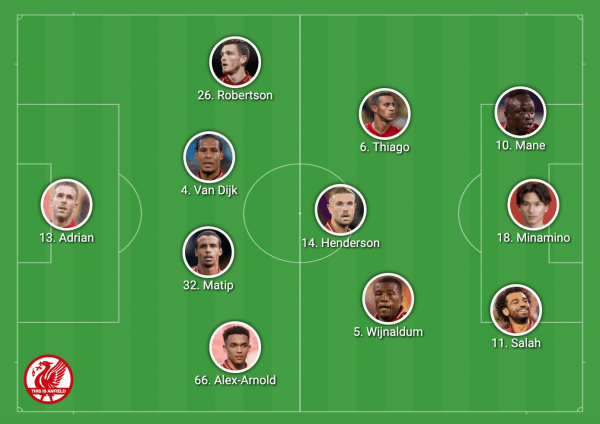 The non-negotiable for Liverpool at Everton, regardless of team selection, is pressure and intensity after the limp showing at Villa.

Individual mistakes have proven costly and the Reds need to be switched on from the off against a Blues outfit full of confidence.

There are no doubt a number of weak spots to exploit and the introduction of Thiago could see Everton look to reduce his influence which could make space for the full-backs to exploit and vice versa.