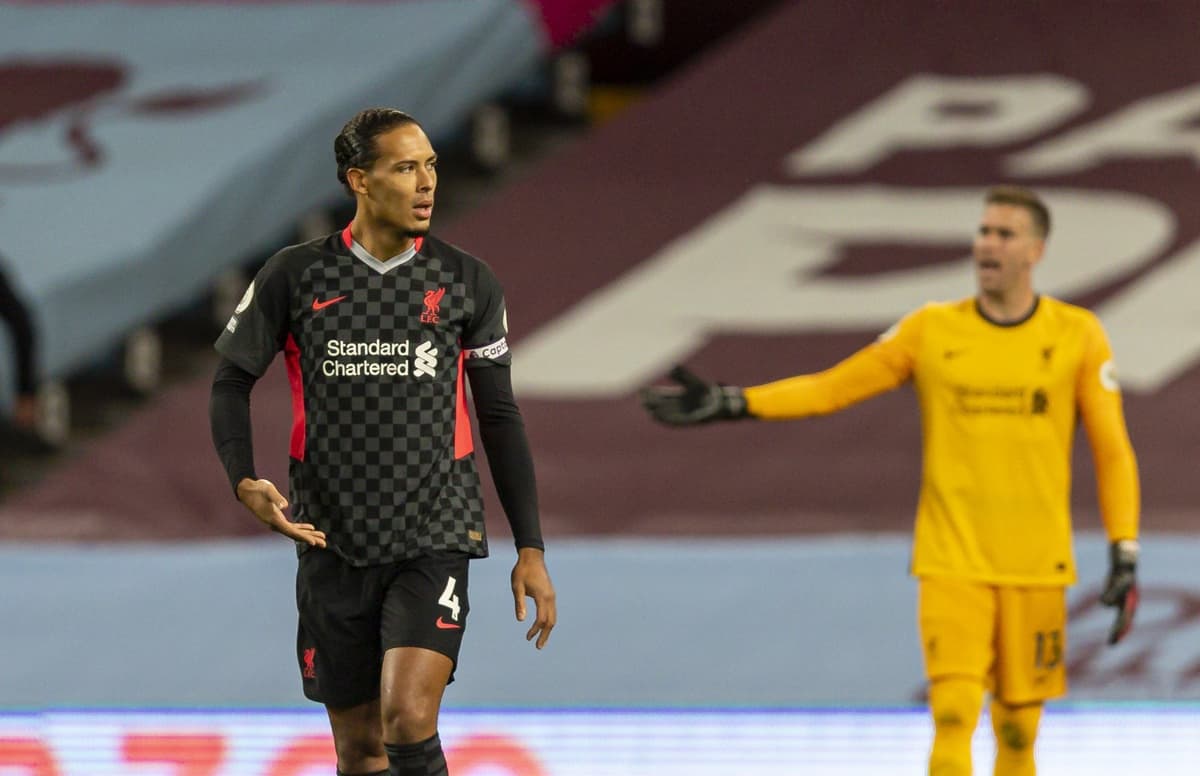 Liverpool’s diabolical display was duly punished by an unrelenting Aston Villa, with a heavy 7-2 defeat ending their unbeaten start.

Jurgen Klopp’s men were out to continue their 100 percent start to the season at Aston Villa, but it came to a grinding halt after they were humbled by the hosts.

A myriad of defensive blunders which started with Adrian‘s sloppy pass across the penalty area saw Dean Smith’s men hit the Reds for four in the first 45 minutes.

Mohamed Salah was able to register on the scoresheet for Liverpool but it was a half whereby it was fortunate that the deficit was only three at the interval.

It would soon be seven for Villa after another two deflected efforts came their way in the second half, with Salah notching another in-between – meaning the Reds conceded seven in a game for the first time since 1963.

Absolutely wild that Liverpool’s biggest, most shambolic embarrassment in a long time is when they’re Premier League champions but here we are.

This is the worse defensive display I’ve probably ever seen in my lifetime from Lfc!i can’t watch anymore I’m going to bed it’s that bad!No excuses just woeful,you score 2 goals at any ground and you should win.A big wake up call hopefully.Embarrassed

“I’ve supported Liverpool since the early 90s when we were shit most weeks.

I mean at this point you just play Kelleher don’t you? It can’t be any worse.

That’s the worst defensive display I’ve ever seen from Liverpool, and I followed the team in the 90s. Something needs to be done about that high line, the back four needs a kick up the arse and a goalkeeper needs to be signed tomorrow. Tonight confirmed it – Adrian is a disaster.

Arguably #LFC's worst performance under Klopp has come from the best team he has had during his time at the club. The most worrying aspect was that heads seemed to drop in a way we haven't seen for a long, long time. Some huge issues to iron out before the Merseyside derby.

Can’t help but laugh now. This is absolutely ridiculous.

I really like how when Liverpool decide they're gonna lose a footy match, they really *lose* the footy match.

This is funny as fuck now and no one will convince me otherwise.

Retire this shocking kit. It's the only way forward.

On a plus note, I like our chances of staying up

Null and void it

There were shreds of positives for the Reds…

Robertson, Jota and Salah are the only players here that haven’t been a disgrace.

Jota has been good.

The only positive I can take from this is that Klopp and the players have unbelievable levels of belief and simply won't accept such a dismal showing.

They will bounce back emphatically – I have no doubt about that in the slightest.

But for all of Liverpool’s downfalls, there was a lot of praise for Villa…

I am sure we are (rightly) all slaughtering some (or all) Liverpool players but fucking hell Villa have been good.

Fair play to Villa, but what the hell am I witnessing. Absolutely diabolical from front to back. Looked like we sleepwalked into the game and now living out a nightmare.

Credit to Aston Villa. They’ve been as brilliant as Liverpool have been shite.

Anyway, credit to Aston Villa Today Went at LFC from minute one. Haven’t stopped going forward. A deserved win for them ???

If Villa had scored 10 it would probably have been deserved.

That was utterly staggering, in the worst possible way for Liverpool. Kudos to Villa they exploited every weakness Liverpool had, and boy – they had a lot. Make no mistake, that will resonate like no other with the Liverpool staff.. #ASTLIV

Hope Jürgen goes absolutely ballistic. Can’t get complacent if we want back to back titles. This needs to be another moment where we go up a notch. Similar to the aftermath following THAT Tottenham loss.

Humbling experience, this. Use it.

We’ve got 2 weeks to get to the bottom of this aberration. #LFC

Won’t get over how bad that was for a while. The strangest thing though, I still have complete confidence Liverpool will go on to win the derby next. Ah, football.

All I can say is thank God that's over and well done Villa. Terrible, terrible, inexplicable performance. So I'm just going to repress it and move on. YNWA Red men

A day to forget for #LFC. Nothing positive and lots to ponder for Klopp. A boot up the arse isn’t always a negative if you learn from it. They’ll be loads of OTT analysis but huge credit to Villa who were sensational. Lots of passengers today which is a very rare event under JK.