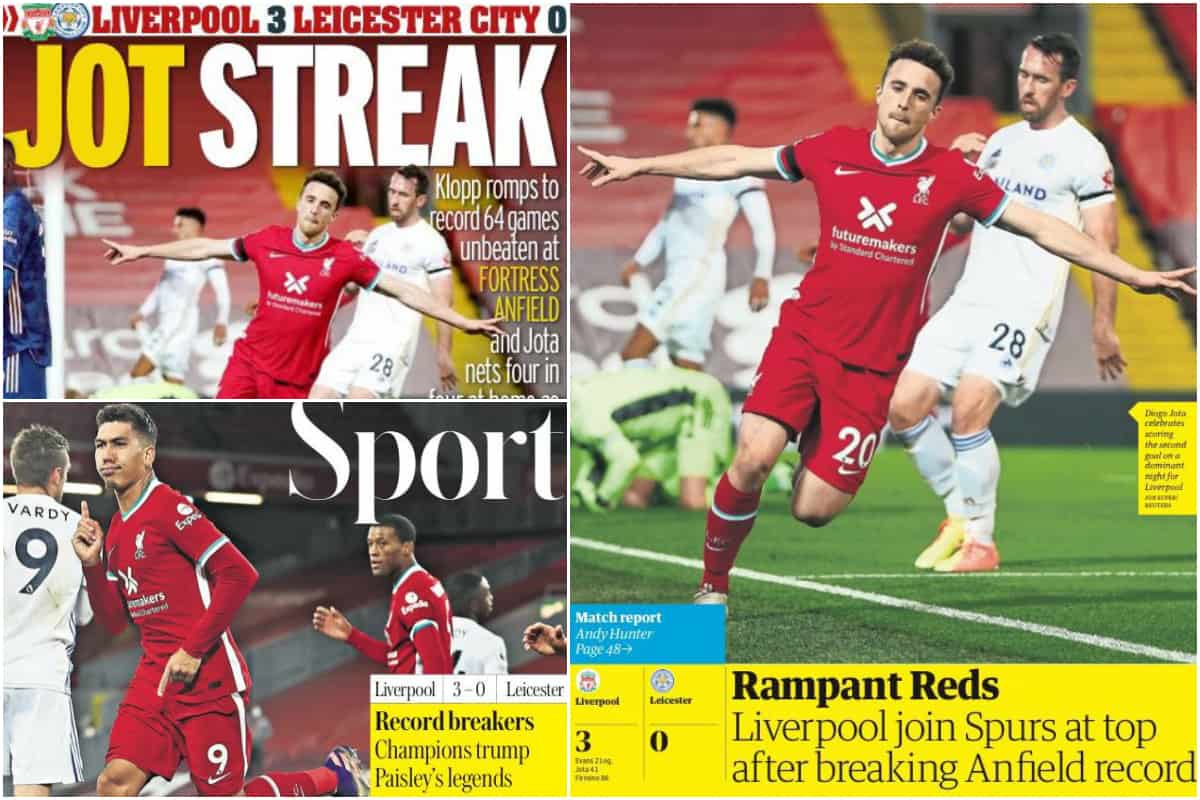 The media felt Liverpool made a statement for the title race ahead in the 3-0 win against Leicester and praised the collective efforts of the squad.

The Reds put on a show on a history-making night at Anfield, cruising past the in-form Foxes to set a club-record 64-match unbeaten home league run.

It was a massive win for Jurgen Klopp‘s depleted side, and hats off to the players and staff for showing such a strong mentality in dealing with all the set-backs so impressively.

Here’s all the key analysis from the media on a “statement” win.

“If you are coming for the crown, you best be ready for the fight of your life”, wrote Neil Jones for Goal:

If this is Liverpool when they are stretched, then the rest of the Premier League should be afraid.

This was a win which will send a message to the challengers. If you are coming for the crown, you best be ready for the fight of your life.

The BBC’s Phil McNutly felt this display gave a clear indication of how difficult it will be for any side to beat the Reds to the title:

Jose Mourinho, Pep Guardiola and Frank Lampard, among others, will harbour ambitions of taking Liverpool’s crown. On this evidence, it will take some doing.

The Liverpool Echo’s Paul Gorst thought it was the Reds’ best performance of the season so far:

All things considered, this was arguably Liverpool’s performance of the season to date.

The Mail’s Martin Samuel assessed Liverpool were simply in “a different class” to Leicester:

They were, to put it bluntly, a different class, taking charge early and refusing to let go, by the end of the night tied with Tottenham on points at the top of the table.

Jones joked almost in disbelief at how easily Liverpool continue to cope despite all the setbacks suffered, reminding that this “remains one hell of a football team”:

Maybe one day we will learn, eh? Write off Liverpool at your peril. The names may change, but the story does not. This is, and remains, one hell of a football team.

The victory was a demonstration of the Reds’ “mentality monsters” tag, in the view of the Independent’s Melissa Reddy:

But a squad so in tune with their manager’s belief once again proved his “mentality monsters” tag accurate as they stepped up to scorch Leicester City, reminding observers of the trait that ensured their status as defending champions.

Liverpool are brilliantly coached, technically astute and tireless, but crowning all of that is their ability to step up rather than be shattered by setbacks.

The Liverpool Echo’s Ian Doyle wrote how the “indomitable spirit” that is engrained in the squad is driving the Reds on:

The starting line-up may have been markedly different to the one that strolled to the title mere months ago.

But this is still Liverpool, Klopp’s Liverpool, the indomitable spirit, togetherness and sheer talent evident deep into the squad.

ESPN’s Mark Ogden wrote how it is this unique ability to somehow become even stronger in difficult periods that makes Liverpool “clear favourites” for the title:

But one team remain the clear favourites for the crown, and that is Liverpool, because no other side could overcome the loss of so many prominent players and still win against a top-level side like Leicester.

Even with half a team missing, Liverpool were still too good for one of the most consistent teams in the Premier League.

The Mirror’s Andy Dunn said the performance was the “hallmark of champions” and thinks the ability to perform even without a first choice XI is what stands the Reds apart:

There is plenty of back-up excellence, swathes of reserve quality. That is why they should be odds-on favourites to keep hold of their crown.

Make no mistake, with the players they had out – and don’t forget, in Virgil van Dijk and Mohamed Salah, you are talking absolute gold standard absentees – this performance had the hallmark of champions stamped all over it.

On the performance, the Guardian’s Jonathan Wilson felt the most impressive aspect was how well “Liverpool shut Leicester down” to eliminate their counter-attack threat:

Although they scored three times and hit the woodwork three times, this was a victory based less in attacking flair but in the way Liverpool shut Leicester down.

Brendan Rodgers’s side lost at Anfield last season only because of a debatable last-gasp penalty, had won four out of four away from home this season, scoring five at Manchester City and four at Leeds, and with, in Jamie Vardy, exactly the sort of cunning striker attuned to divining any weakness in a patched-up back four, and yet they barely had a chance.

The Mirror’s Mark Jones labelled Jota the best new signing in the Premier League and explained how his success is down to his near-perfect decision-making in front of goal:

Four of those goals came in the Premier League, a new club record, and if these descriptions of the Portuguese’s feats seem a little on the nose then that is a reflection on him. He is making the smart, efficient decision every time.

In the past the fact that the Reds were without Salah here would have induced mass panic, but Jota just slotted in perfectly and showed just why he is the new signing of the Premier League season so far.

The Telegraph’s Chris Bascombe explained how the best thing about Jota’s display was that Mohamed Salah‘s absence wasn’t felt, before lauding how the Portuguese can score all types of goals:

Perhaps the greatest compliment to Jota – and the reason why even with a packed treatment room Liverpool are still setting the standards – is Jurgen Klopp’s attack did not look compromised without their world class Egyptian.

Each of Jota’s goals in a Liverpool shirt so far have had a different dimension, ranging from spectacular volleys outside the penalty area, to his historic strike here which underlined his heading prowess.

And the same reporter drew an interesting comparison between Jota and Luis Suarez, noting how the current Red has similar traits to the former No.7:

Yet after his landmark Anfield goal to underline the champions’ gulf in class with Leicester City, it occurred that Jota is the closest Liverpool have had to Suarez since the Uruguayan left for Barcelona.

Temperament wise, the similarity may not stretch. In every other aspect Jota has the same profile.

Discussing Liverpool’s attack in general, David Maddock, of the Mirror, explained how the front line could benefit even further from the weakened defence:

They were vulnerable, but still Rodgers didn’t know whether to stick or twist. Or rather, his side were never comfortable pushing too high against a still deadly attacking force.

And that is the problems sides will still face against a definitely weakened Liverpool this season. If you go at them, as instinct demands, then Mane or Jota can slice you apart in one movement.

And several other individual performances earned praise in post-match reports…

Mark Jones reserved a word of praise for James Milner, labelling the vice-captain a “terrific” squad player and noting his influence on and off the pitch:

He wasn’t quite the equal of his much younger teammate of course, but the 34-year-old delivered a typically steady display on the right side of defence before moving into midfield in the wake of the injury to Naby Keita.

The veteran is simply a terrific player to have in your squad, and his influence on this side on and off the pitch is one of the running stories of this successful period.

Gorst saved a word for “the excellent Andy Robertson“:

And a word for the excellent Robertson.

At a time when uncertainty continues to wash across Liverpool’s defence on a match-by-match basis, the Scotland captain has been a beacon of consistency, turning in high-quality performances with few worries over his fitness.

Neil Jones singled out the “confident, robust and tactically perfect” Curtis Jones as a star performer:

Jota led the way, but how pleasing it will have been for Klopp to see Curtis Jones, for example, performing so admirably in midfield. This was only the 19-year-old’s third Premier League start, but he looked like he had been there all his life.

Confident, robust and tactically perfect, he certainly outshone another England hopeful, James Maddison, on the opposition.

At least that’ll be the case for the rest of this season anyway, as the Brazilian returned to deliver a terrific display in the centre of defence alongside Joel Matip and underline that this will be Liverpool’s first-choice pairing from now on and the one that could ensure they stand or fall.

Against the specific threat that is Jamie Vardy they were excellent, dealing with the ball both in the air and on the ground to ensure that the forward barely got a sniff.