Alex Oxlade-Chamberlain has served a reminder that he is on the road to recovery, having missed the last three months of action for Liverpool with a knee injury.

The 27-year-old has been sidelined since the third week of August with what the club initially described as a “knock to his knee” during pre-season training.

He subsequently sat out of the warmup friendlies against Stuttgart, Salzburg and Blackpool, and has missed the first 14 games of the campaign proper, as injuries mount up elsewhere throughout Jurgen Klopp‘s squad.

In his absence, Oxlade-Chamberlain has seen Xherdan Shaqiri take a more focal role, including in his favoured position in midfield, while Curtis Jones has increased competition with eight appearances so far, too.

The injury was believed to be similar to that which kept Jordan Henderson out for two months from the end of last term, which would suggest that Liverpool’s No. 15 should be nearing a return.

Oxlade-Chamberlain has been largely quiet on social media during his layoff, but made his third post since the summer break on Sunday with a hint at an imminent comeback:

While the photograph shared appears to be an old one, it could well be that he is now nearing his comeback – at least to light training at the club’s new Kirkby facility.

Earlier this month, Klopp provided a rare update on Oxlade-Chamberlain’s recovery, saying he was “doing well” but “it takes time.”

“[We are] doing well, that’s how it is with the boys,” he said. “Especially Oxlade, it takes time but looks really good, but takes time – everybody knows that.”

Liverpool will rightly remain cautious in easing the midfielder back into action, due to his history of injuries, but if his issue is similar to Henderson’s he should be available before the end of the year. 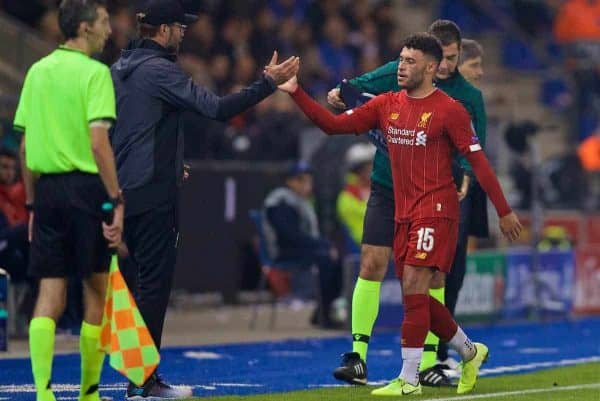 It has been a turbulent time for Oxlade-Chamberlain since joining the Reds in 2017, with a serious of setbacks limiting him to just 87 appearances, largely spread across his first and third seasons with the club.

He has come up with the goods at crucial moments, but his fitness problems have led Klopp to turn to other options in both midfield and attack.

Nevertheless, if he is nearing his recovery, Oxlade-Chamberlain could provide Liverpool a major boost in a busy season, perhaps with an eye on a place in the England squad for next summer’s Euros.