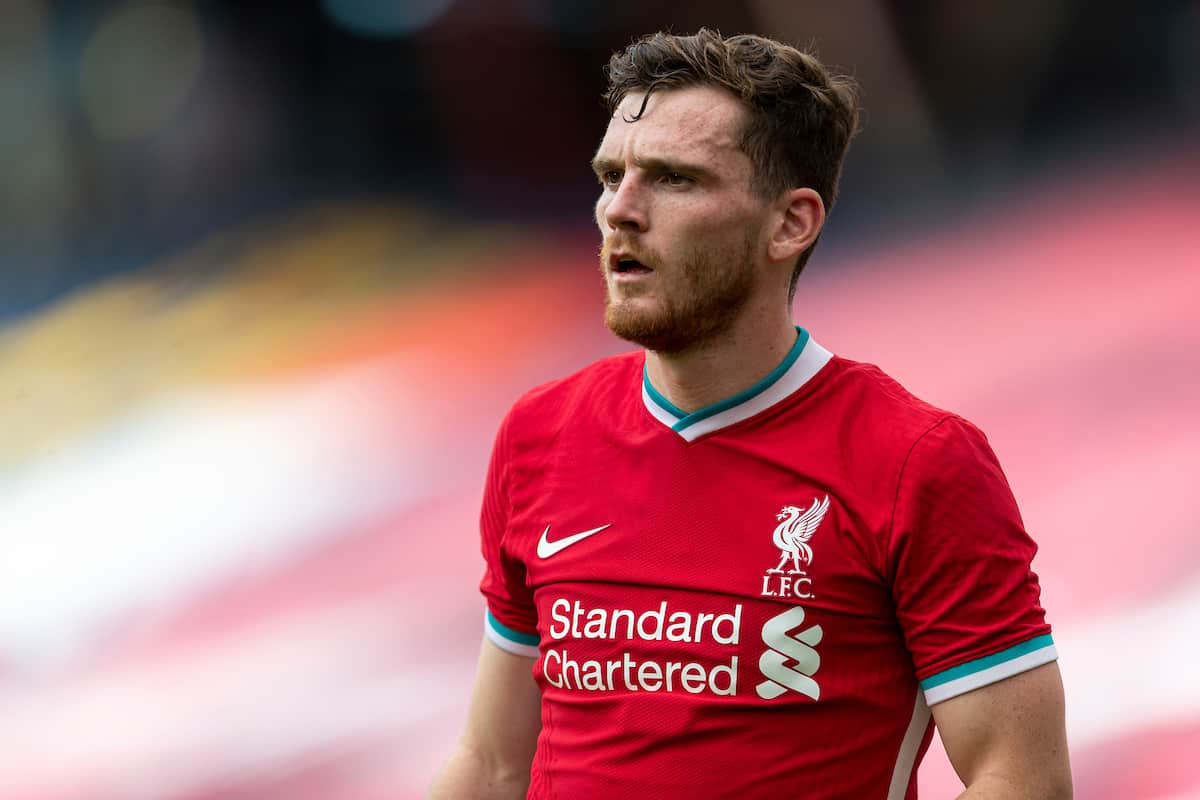 Andy Robertson was left out for Scotland’s clash with Slovakia on Sunday due to a hamstring issue, but there is no claim yet of an injury blow for Liverpool.

The left-back is the only fit player among Jurgen Klopp‘s first-choice back four at present, and now he is managing his fitness while on international duty.

Robertson revealed after the penalty shootout win over Serbia on Thursday – which clinched Scotland’s progress to Euro 2021 – that he had declined to take a spot-kick as his “hamstring had seized up.”

He insisted it was “just a bit of cramp,” however it was concerning enough for Steve Clarke to omit him from the squad for the clash in Slovakia on Sunday, as one of eight changes.

Before the game, Clarke explained that Robertson was “the most doubtful” of those to suffer “knocks and niggles,” which is clearly a worry for Liverpool.

However, there is no indication yet that it is a serious concern for either club or country, and his fitness is likely being managed after playing 120 minutes earlier in the week.

Any layoff for Robertson would undoubtedly be a major blow for the Reds, with Virgil van Dijk already out for the season, Joe Gomez unlikely to play a big part in the rest of the campaign and Trent Alexander-Arnold sidelined for a month.

But it would almost come as no surprise if he is out at some stage this season, with the Scot already having clocked the most minutes of any player in Klopp’s squad, just ahead of Mohamed Salah.

He is a player who is capable of playing through pain, and willing to, but the unique situation this season suggests that a careful approach is required.

Fortunately, Liverpool signed Kostas Tsimikas this summer, and though the Greek has struggled with injury issues himself, he is back fit and ready to be rotated into the side after the international break.

Provided he is fit, Robertson will likely start against Leicester on November 22, but Tsimikas could then come in for the visit of Atalanta on November 25 – particularly as a trip to Brighton comes less than 72 hours later.

Upon Tsimikas’ arrival, Klopp hailed him as a “proper option” that would allow rotation at full-back, admitting playing Robertson and Alexander-Arnold is almost every game “would limit their careers.”

Now is the time to prove his faith in the £11.75 million signing, as preserving Robertson’s fitness is of paramount importance.