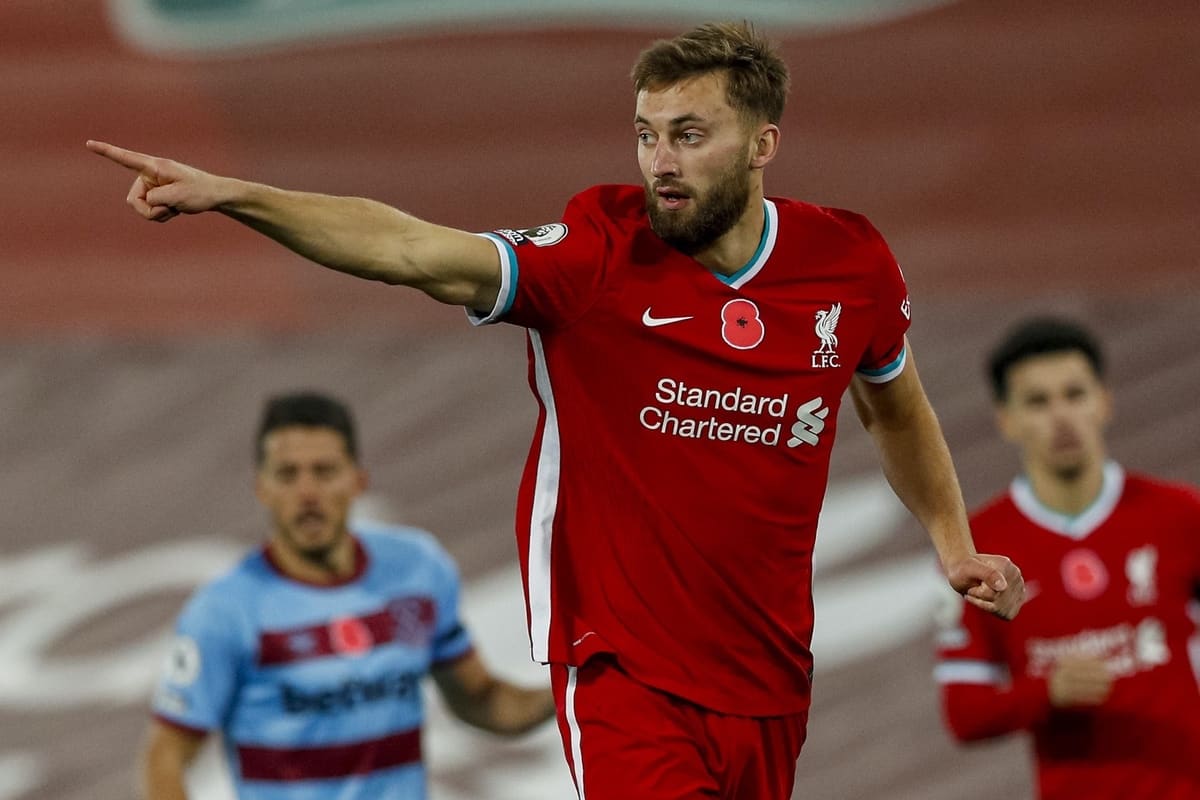 In one move, Swansea both angered Liverpool and ultimately boosted them, as they pulled out of a permanent deal for Nat Phillips on the eve of the transfer deadline.

Phillips became the toast of Anfield on Saturday evening as he produced a man-of-the-match performance on his Premier League debut, on the way to a 2-1 win over West Ham.

The 23-year-old was, for Jurgen Klopp, the obvious choice to partner Joe Gomez, as with Virgil van Dijk, Fabinho and Joel Matip injured, and Rhys Williams needed for the Champions League, his relative experience was vital.

It paid off, as Phillips dominated in the air and, bar a misstep here or there, kept it simple and kept the Hammers at bay – and in particular, their physical centre-forward Sebastien Haller.

While it remains to be seen whether he has a long-term future at Liverpool, he is certainly in a better position than he was in the final days of the transfer window in October.

According to The Athletic‘s James Pearce, Phillips was “on the brink” of joining Swansea on a permanent basis, with the Championship side needing a last-hour replacement for Joe Rodon, who was heading to Tottenham.

The deal got to the stage in which the Reds gave their player permission to discuss personal terms with the Swans, with the belief that he would seal his exit after four years on Merseyside.

But Swansea pulled out of negotiations late on, preferring to sign Ryan Bennett and Joel Latibeaudiere instead, which Pearce claims left Liverpool “less than impressed.”

Their frustration at “how the Welsh club conducted themselves and messed Phillips around” comes after positive relations had been built up between the two sides in recent years.

With ex-Liverpool academy coach Steve Cooper now manager at the Liberty, the Reds agreed a half-season loan deal for Rhian Brewster in January, and had even considered another temporary switch prior to his move to Sheffield United.

While this situation may not deter further business with Swansea in the future, it may lead to Michael Edwards thinking twice about favouring the south Wales side in any talks.

For Liverpool, it proved to be a positive situation, as Phillips is now available in a bona fide crisis, with Van Dijk out for the rest of the season and bodies needed at Anfield.

At this point, Phillips may even be fourth-choice centre-back behind Gomez, Fabinho and Matip, as though Williams is certainly a promising talent, he is far from as developed as the No. 47.

The issue, of course, is that Phillips is not registered for the Champions League, but that is likely to change if the Reds reach the knockout stages.