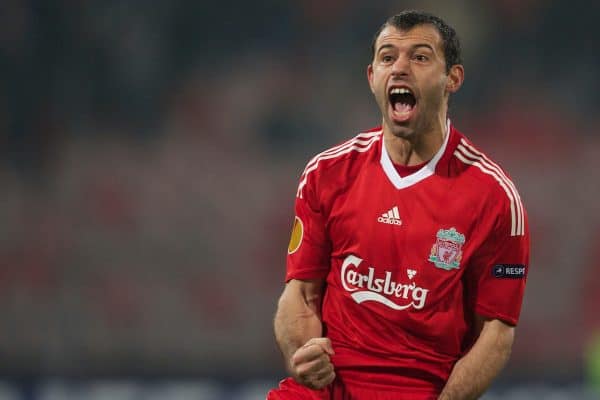 Javier Mascherano has announced his retirement after 17 years, with the Argentinian midfielder the last of Liverpool’s 2007 Champions League final outfield squad to do so.

As the chant goes, Liverpool had the best midfield in the world: Xabi Alonso, Momo Sissoko, Gerrard and Mascherano.

Three of those, Alonso, Masherano and Steven Gerrard, started against AC Milan in Athens, and now the only player still playing from the squad that night is Pepe Reina.

On Sunday, Mascherano confirmed he has retired after a 17-year senior career that began at River Plate and ended at Estudiantes, via both Liverpool and Barcelona.

“I lived my profession 100 percent, to the maximum that I possibly can, and for a while now that has been getting harder,” he told reporters in a press conference.

“Sometimes you don’t choose the end, it happens all by itself.”

There was a sadness in Mascherano’s address, and he revealed that “post-pandemic, I thought that the illusion was I was going to feel again, and the truth is that I couldn’t.”

“Out of respect for everyone, it’s time to step aside and finish this race. I didn’t want to let time pass,” he continued.

The 36-year-old, who is Argentina’s record appearance-maker with 143 caps, also said: “I am infinitely grateful to the clubs I played for, the teammates I had throughout my career, and to Estudiantes who gave me the opportunity to come and play in recent times.”

Mascherano only played for Liverpool for three seasons, but the tenacious midfielder made a significant impact on Anfield, as a world-class talent who, for many years, was the best of his kind to turn out for the club.

He featured 139 times for the Reds, but his time on Merseyside ended on a sour note during the short reign of Roy Hodgson, during which he was arguably the club’s top performer.

Upon announcing his retirement, Mascherano was greeted with well-wishes from former Liverpool teammates Gerrard and Luis Garcia on social media:

Mascherano is a legendary figure in Argentina, who won 19 trophies with Barcelona including the Champions League on two occasions – it is a shame he could not lift the European Cup with Liverpool, coming so close in 2007.

At Liverpool, his fingerprints remain as only this season Jurgen Klopp used him as a prime example for a midfielder slotting into centre-back and shining, such was his quality and versatility.