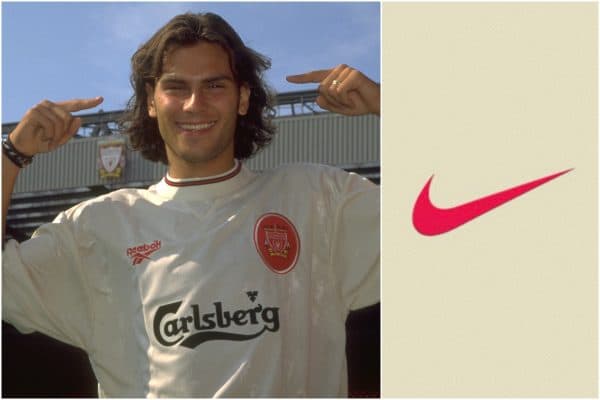 Nike’s design for next season’s away kit have leaked, and it seems Liverpool will be wearing a throwback to their cult classic ecru kit from the 1996/97 campaign.

The Reds are only into the first months of their time wearing Nike, having moved from New Balance to the American sports giant ahead of the current campaign.

But with the club having already provisionally agreed designs for the following season, plans for 2021/22 will see Liverpool again look back to the ’90s.

That is according to the reliable Footy Headlines and Twitter user @fumlerRawk, who described the predominant colour for the kit as ‘fossil’, with ‘bright crimson’ and ‘dark atomic teal’ detailing.

Based on a leaked design for a ball for next season, they deduce that the Nike swoosh and LFC logos will be in ‘bright crimson’ and the ‘dark atomic teal’ will be used for the collar and cuffs.

They add that the shorts are due to be black with ‘fossil’ detailing, and though it is currently unclear how the socks will look, it is assumed they will mirror the shirt in terms of colouring.

This information has allowed @fumlerRawk to provide a mockup of how Liverpool’s next away kit would look, using the template from the current design:

UPDATE: from what I understand, the shorts will be black and fossil(ecru) for the away kit 21/22.

Nike’s final design will certainly differentiate from this, but early indications are positive, with supporters no doubt delighted with the return of the ecru of 1996/97.

Liverpool are also rumoured to be wearing yellow and red for their third kit in 2021/22, which could well be a throwback to the classic Candy kits of the ’80s, or possibly the Reebok offering from 1997/98.

Much could change in the next six months, but with the leaks proving accurate leading up to the release of this season’s kits, it seems likely the Reds will be wearing ecru.

Who knows, perhaps we’ll see Bobby, Sadio, Diogo and Mo dressed up like the Beatles to promote it again…