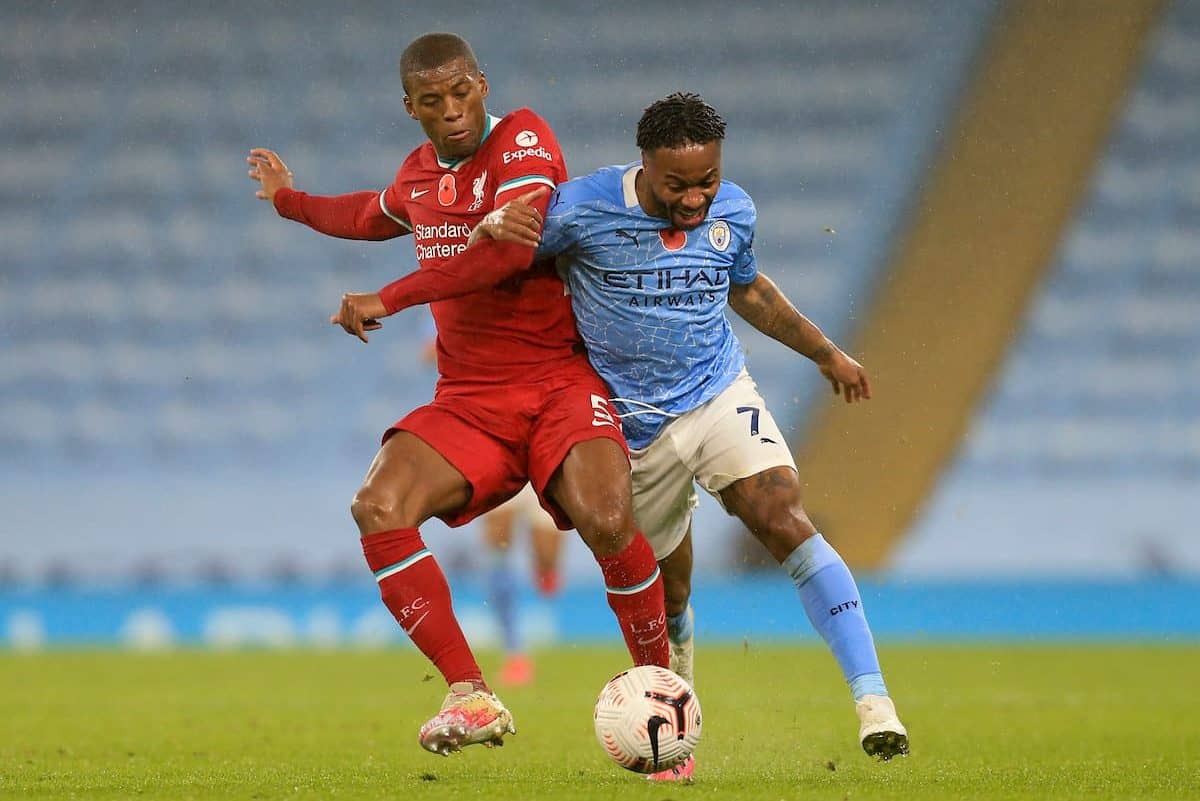 Jurgen Klopp pulled an unlikely tactical ace as he fielded a 4-4-2 that became a 4-2-4 at Man City, proving nothing is untouchable as Liverpool embrace the unpredictable.

This opening segment to the 2020/21 season has largely been an affront to decency, when it comes to what has been asked of, and rolled at, Jurgen Klopp’s Liverpool.

A stern set of on-pitch assignments, both in terms of domestic and European games, a cluster of devastating injuries to key players and the regular goading of a mocking VAR system would have given us the perfect excuse for a sluggish start to the campaign.

Liverpool have navigated it beautifully, however, when lesser teams would have shrunk visibly. 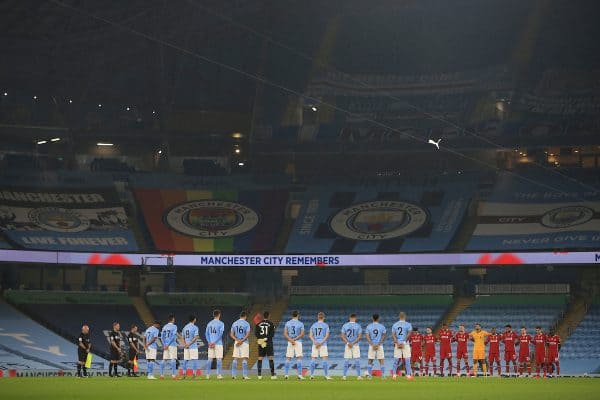 The fixture list for the reigning Premier League champions has been unforgiving during these early exchanges.

Sunday’s trip to Man City, ending in a 1-1 draw, means that what should be the most daunting away day of the season is now behind us, as are visits to west London’s pretenders, Chelsea, and to our loveable blue cousins over the other side of Stanley Park.

Beyond this, another ‘big six’ faceoff has been passed, with Arsenal having drifted through Anfield a few weeks back.

Added to these tests, you can throw in Aston Villa winning the lottery with their seven goals at Villa Park, plus being handed the joys of facing the bright-eyed, bushy-tailed and well-prepared Leeds on the opening weekend.

We were even dealt Sheffield United and West Ham during what were performances of peak stubbornness of intent from both sides.

Within the laws of swings and roundabouts, Liverpool will be rewarded with a rebate at some stage, in the shape of a spate of carefree 4-0 and 5-0 wins against defenceless opponents.

This respite doesn’t come with immediate effect, however, as Leicester are next up, when Brendan Rodgers’ league leaders arrive at Anfield the other side of the last international break of the calendar year.

In the Champions League, meanwhile, Klopp has been compelled to fend off his hardest two fixtures of the group stages, away to Ajax and Atalanta.

All of this has been navigated with not only the loss of Virgil van Dijk, but for spells out of varying lengths for Alisson, Joel Matip, Fabinho, Jordan Henderson and Naby Keita, amongst a raft of others I’ve probably forgotten.

Eight games in, and a quick look at the current Premier League tables makes for interesting reading, something that suggests football behind closed doors is proving to be a great leveller for some.

Leicester lead, but only after a weekend of leapfrog in which Southampton and Tottenham had also enjoyed a few hours at the top of the tree.

It could be suggested that this season’s Premier League title race could turn into a bit of a demolition derby, if Liverpool and Manchester City don’t keep control of their consistency.

In this case, long may Leicester and Tottenham’s Thursday night commitments continue.

On Sunday (while this season will come with no guarantees), Klopp and Guardiola’s players showed enough endeavour to make it feel that their quality will prevail over the longer stretch of the campaign, rather than them being drawn into a wider bunfight. 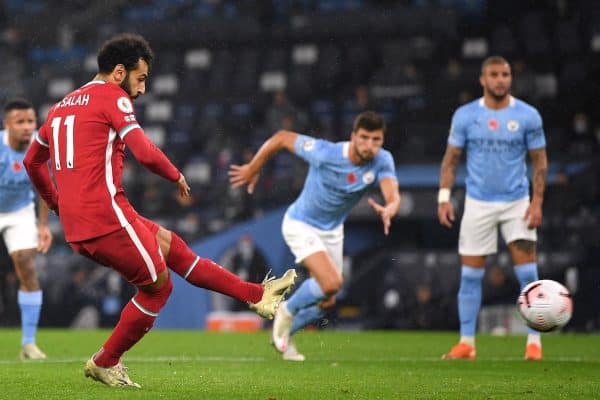 While many teams will spend their time taking two steps forward, one to the side and one backwards before moving forward again, Liverpool and City will still have the extra gears to break out into sustained sprints, whenever the will arises and the legs are ready for it.

Consistency will be everything.

At Eastlands, Klopp again deployed his new 4-2-4 formation, up against what at times appeared to be a 4-4-2 of Guardiola’s making.

This made for a trip in a time machine, back to the late 1980s, and a Liverpool of Barnes, Beardsley, Aldridge and Houghton/Johnston. A game that wouldn’t have been out of place at Maine Road.

It was an admirably gung-ho approach from Klopp, and it left me with a strange sense of serenity, rather than dread, at what was to come as kickoff time loomed.

Ultimately, it proved to be a game that was served up as a three-part odyssey.

Liverpool took the opening third of the game defiantly into City faces, and there seemed to be little in the way of knowledge from the home side in how to deal with it.

A lead was deservedly obtained, and we looked likely to build upon it. The second third of the game was where the grey areas lay.

City shook their punch-drunk aura, carved an equaliser that was a well-taken product of the space a two-man midfield gambles on gifting, and then missed a penalty that football in a common sense-leaning parallel universe simply does not award.

Amidst this, Liverpool continued to throw out compelling shapes of their own.

Within the final third of the game, this is where Liverpool played rope-a-dope. It was difficult to tell if they were being overwhelmed or just ran out of steam. Klopp’s teams aren’t renown for running out of steam, however.

It was bold of Klopp to go 4-2-4 on Sunday. A vote of confidence in his belief in the system.

As good a front four as contemporary football can offer, it is even a formation that will offer Takumi Minamino greater chances of involvement, and once more we saw Xherdan Shaqiri on the pitch.

The trick will be settling on the perfect midfield duo, and how best to flood the centre-ground when on the backfoot.

When in full attacking flight, the 4-2-4 morphs into a 2-4-4, yet, as seen with City’s equaliser, when falling back the two wide components of the front four need to fill some spaces.

What’s also needed is a central midfielder of perpetual motion. It is a formation that requires a Souness, a McMahon, a Gerrard or a Keane.

It could be a formation that is tailor-made for Keita.

The 4-2-4, when played to perfection, is the greatest of formations. There is something utterly majestic about it. It’s bold, it’s brave and it places a consummate trust in the players to be able to pull it off.

If Liverpool were to win the Premier League title with a 4-2-4 it would be akin to a modern-day tennis player taking the Wimbledon title playing a persistent serve-and-volley game, or that Ronnie O’Sullivan threat to contest, and win, the World Snooker Championship playing left-handed.

Regardless of whether he sticks with it or not, Klopp’s bravery in fielding a 4-2-4 away to Guardiola’s City is the proof that, for Liverpool’s manager, there are no sacred cows when it comes to his search for perfection and success.