Liverpool, as reigning champions, are there to take a pop at. From the perspective of our opponents, it’s the right you earn when you don’t win the title yourselves.

The battle lines were once again drawn over the way Mohamed Salah won his penalty, the crucial pivot upon which Saturday’s game tilted in Liverpool’s direction. The general defensive hot takes on it being that if it were Harry Kane it would be classed as ‘clever play’, but as it was Salah, he’s a shameless diver.

When football’s most high-profile talking heads poke the topic with a stick there’s no point in responding as it’s like arguing with teenagers.

Football has always been about gaining an advantage in one capacity or another. A defender wraps his arms around an attacker when defending a set-piece and very little is said about it. A shirt is pulled here, blatant obstruction is applied there. All just part of the game.

As the riposte goes, if you give a penalty for every such instance then each game will see 15 to 20 spot-kicks awarded…

Yet, if an attacking player tries to procure a goalscoring chance via a perceived degree of sleight-of-hand then the moral fabric of the game is apparently being assaulted. 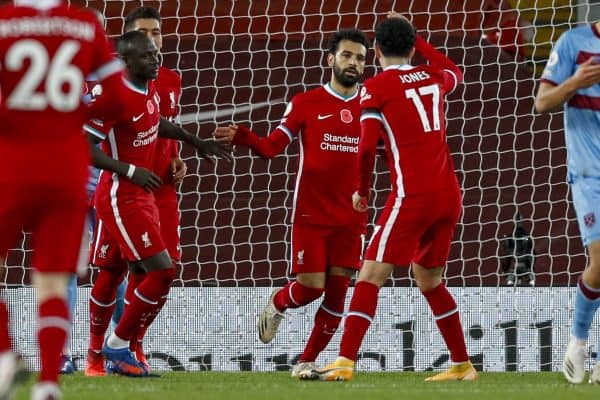 See Diego Maradona and ‘The Hand of God’. It was fine for the kicks and pointed elbows of Terry Butcher and Terry Fenwick to land on Argentina’s iconic number 10, but when he picked the pocket of Bobby Robson’s team with a well-timed use of hand to ball, all moral judgements broke loose.

Thirty-four years later, it is an occurrence that still raises the periodical heckles of some.

On Saturday evening, West Ham United came to Anfield in a stubborn frame of mind. Big, physical, well organised, they have impressed the casual observer at times so far this season, inclusive of taking a point against Man City the previous weekend.

David Moyes’ team offered little in the way of space for Jurgen Klopp’s players to work their magic, certainly in the first hour of the game. It was a stranglehold on space that could never last the full 90 minutes and beyond. The physical and mental demands would be too much in this respect.

No sense of panic, no discernible stress about the situation, they once more found a way through to gain the three points that put them back on top of the Premier League.

Even the blow of a late goal being disallowed was shrugged off, VAR again making a nuisance of itself.

Sadio Mane was penalised for clashing with Lukasz Fabianski when going for a loose ball, his momentum partly propelled by the West Ham defender that was breathing down the back of his neck.

VAR is in need of a time limit, a 60-second rule perhaps. If you need to look at more than three angles and tilt your head when looking at footage of a ‘questionable moment’ then there is enough conjecture over whether an incident needs overturning, or not, to render the original decision the valid one. Award the goal and carry on with the game.

As it was, Diogo Jota wouldn’t be denied his goal for much longer anyway as he smashed in a clinically taken winning goal, linking excellently with a Xherdan Shaqiri many thought would be playing his football elsewhere by now.

Jota is making himself indispensable. Massively impressive, the lad has a scouse vibe about him. It is as if he’s found his natural home. Bright-eyed and a facial expression that suggests he’s enjoying life.

Jota hit the ground running at Anfield as soon as he weighed in with that “what’s happenin’?” promo video. He is hugely likeable.

At the other end of the pitch, Nat Phillips stepped up impressively during his surprise outing. One misplaced pass, drawn forward on another occasion into a dangerous area yet beyond that, he did all the basics right. It is the Martin Skrtel way of defending and there is nothing wrong with that.

Within this, it is no surprise that Jamie Carragher felt him worthy of the man of the match award.

Joe Gomez again played well, apart from the poor clearance leading to West Ham’s goal, which he seemed to play with his left ear.

With Joel Matip soon to return, Rhys Williams gaining in minutes on the pitch and now Phillips embracing his Premier League debut with an assured display, Klopp is doing all he can in terms of giving his central defence as many options as possible in the absences of Virgil van Dijk and Fabinho.

There are, however, bigger challenges to come this week than those offered by Midtjylland and West Ham.

Rather than bludgeoning Scandinavian and Anglo-Saxon approaches, the dangers posed by Atalanta and Man City will be blizzard offences that will lean on innate skill, speed and attempts to disorientate and put us off balance.

Within this, it will give us greater space in which to attack. These might well be games that will be won, drawn or lost on the front foot.

It will be a week that brings Bobby Firmino’s form into the sharpest of focuses. I’d suggest that either his season will take off from here or that the calls for him to be replaced will reach a higher pitch.

While not make-or-break territory for him, it will be a fork in the road from where he might just become the go-to scapegoat for adverse results.

A big week presents itself, for a variety of reasons.

While you’re here… If you like the words I write, you might just like this here book I’ve written all about the chic years of the UEFA (Yoofa) Cup, which you can find here.