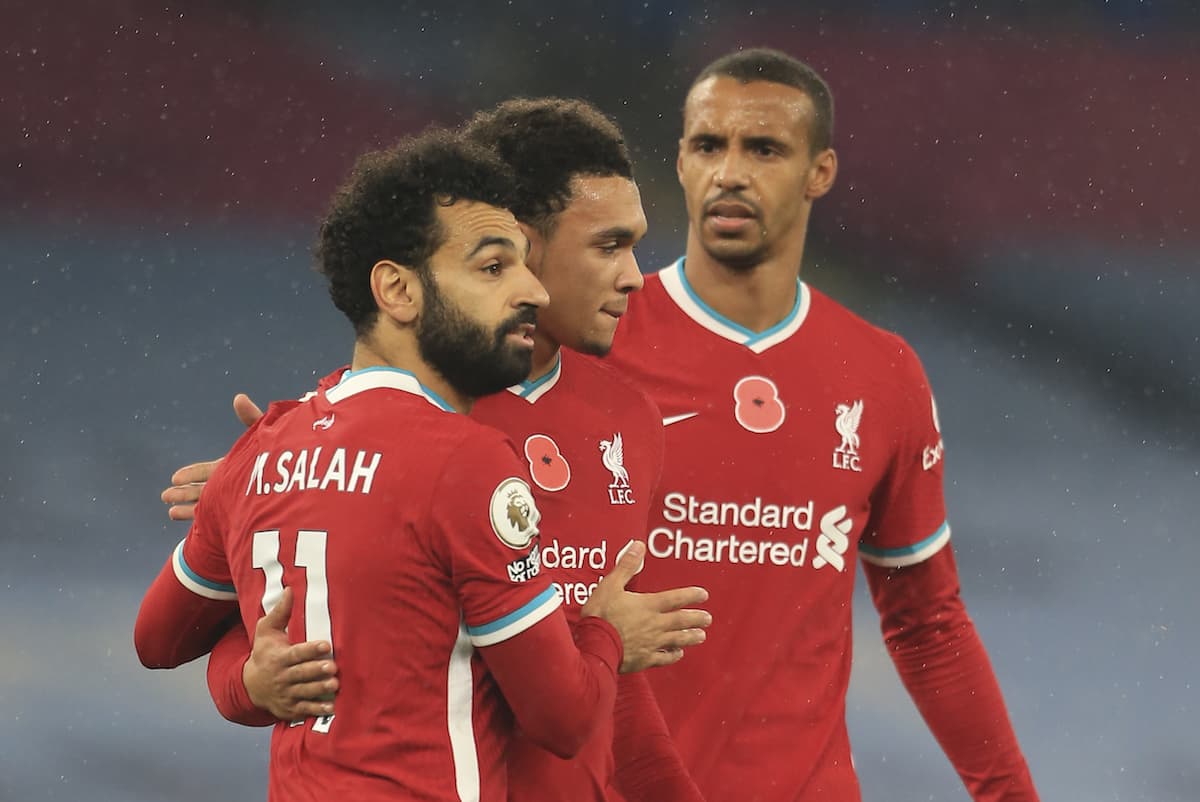 Liverpool were left to settle for a 1-1 draw at Man City in a game which saw two polarising halves as a scintillating start made way for a scrappy finish.

You could say to some extent that it was a relatively quiet evening for the No. 1 in terms of the saves required of him – or maybe it’s because he makes everything look easy.

The brilliant save with his legs to deny Raheem Sterling was his standout moment, and what was key was his speed off his line and his safe hands in the wet conditions.

There was little he could do to deny Jesus from close-range.

Trent was forced to be more diligent in his defensive duties than we typically see, and while tasked with the job on Sterling for much of the affair, it was Gabriel Jesus who had his number.

He was out-manoeuvred in that passage and had the chance for retribution of his own as his run into the box was rewarded, only for Ederson’s desperate intervention to deny him.

But the most alarming point to emerge from the game was a calf injury on the hour mark, with the relentless schedule taking its toll.

After being struck by another injury, Joel Matip was finally welcomed back into the fold for his first start since the Merseyside Derby last month.

The 29-year-old injected another experienced head into the side and while still rusty on the ball he was a strong and physical presence in his defensive duties.

Consistently on the front foot, Matip was a menace in disrupting City’s forward movements and it was a beautiful sight indeed to see him back on the pitch.

The 100th league game of his career in English football saw Gomez partnered at centre-back with Matip from the start for the first-ever time, the 37th defensive partnership used by Klopp.

He continued to play on the left and while he hardly stepped a foot wrong throughout, he found himself the victim of the ridiculous handball laws after referee Craig Pawson consulted VAR.

Thankfully, Gomez was not punished as De Bruyne pulled his strike wide.

A bright spark early doors with Gini and Sadio Mane on the left-wing but much like his full-back partner, it was largely a night of staying alert in defence with the threat City posed.

As always, however, his galavanting runs were welcomed to open the field and the balls he did deliver into the box were tantalising ones, but Reds could have done without his cross-field ball which gave the hosts a clear opening.

It was a game full of gut running from the captain as a member of the double-pivot alongside Wijnaldum, where it looked as though he left no grass uncovered.

A particular high was his decisive block on De Bruyne in the first half, while his willingness to play through the lines and use his angle, primarily in the first 45, was key to threat the Reds posed moving forward.

Like his teammates, his influence waned as the game wore on as fatigue came into play but he was as vocal as always.

It was a mixed outing for the Dutchman as he coupled his brilliant work in tight spaces and his link with the attack with being pulled out of position and losing possession in the defensive third.

The former proved costly and came to be as he looked to cover Mane, but he was slightly naive in that he left Kevin De Bruyne with the space to pick out his pass.

Was one of the culprits of sloppiness creeping into his play as full-time drew nearer.

Much of the pre-game discussion centred around the Brazilian, should he be in the starting XI or not – and in the end, Klopp didn’t choose one or the other as he opted to field the new look ‘fab four’.

Acting as the No. 10, Firmino was consistently played into dangerous areas but continued to see his first touch let him down and the move would frustratingly fizzle out as a result.

Clearly devoid of confidence, Firmino would be withdrawn with less than an hour on the clock. 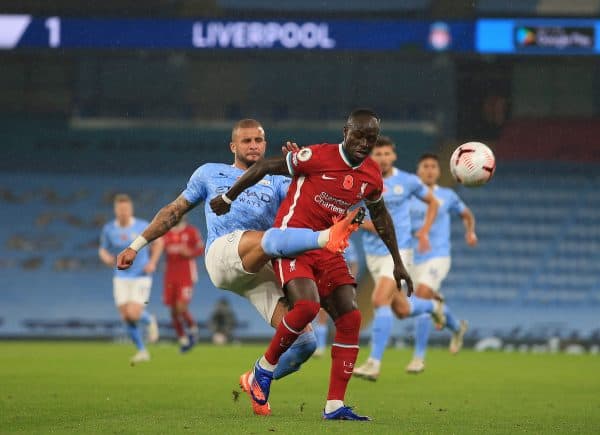 After hitting headline after headline in recent weeks, it was more of a quiet affair for Diogo Jota as he settled in on the right side of the attack.

While having struck gold with his every touch in midweek, the Portugal international was guilty of a scuffed shot or two here and was largely seen closing down his opponents rather than the other way around.

It was another energetic performance from Liverpool’s No. 10, where he proved to be a constant thorn in Walker’s side – with his powerful run into the box led to the Reds’ opener.

Mane’s pace and attacking impetus left City’s defence bamboozled at times and had a multitude to opportunities to add to the scoresheet himself, or by feeding in others – but, at times, made the wrong decision.

With Liverpool dropping into a midfield four on defensive transition he was disciplined in his approach but did leave space to trigger City’s equaliser.

Salah was deployed as the centre-forward at the Etihad and was a key part of the electric start to the match, with his penalty goal, the 14th as a Red, providing the ideal foundations.

It was his 10th goal this season and the fourth consecutive game in which he has scored, but his clear cut chances were few and far between before he was then starved of opportunity in the second half.

A somewhat surprise introduction saw Shaqiri slot in on the right. He was bright in passages but with the Reds sitting deep for much of the half his influence was largely required in defence.

And what was that free-kick to end the game?

Mr.Reliable came to the fore once again for Liverpool, this time at right-back where his experience and game management skills

Klopp went big in his team selection having opted to not run with the discourse of choosing only one of Firmino and Jota and it kicked off in scintillating fashion.

Liverpool were a constant threat in the first half and could have had three or four goals to their name before the interval if not for poor decision making with the last pass.

But Firmino will continue to present food for thought as he looks to get his No. 9 back firing on all cylinders, while fingers will be crossed for Trent.

After tasting defeat at the Etihad Stadium for the last three seasons, a draw is an improvement and while it feels like more could have been taken from the game, it could have easily gone another if not for a certain penalty miss.

Not using all substitutes when a constant cry to up the number allowed to five remains puzzling, but Liverpool are set to welcome back Thiago and Fabinho after the international break which will provide a major boost.