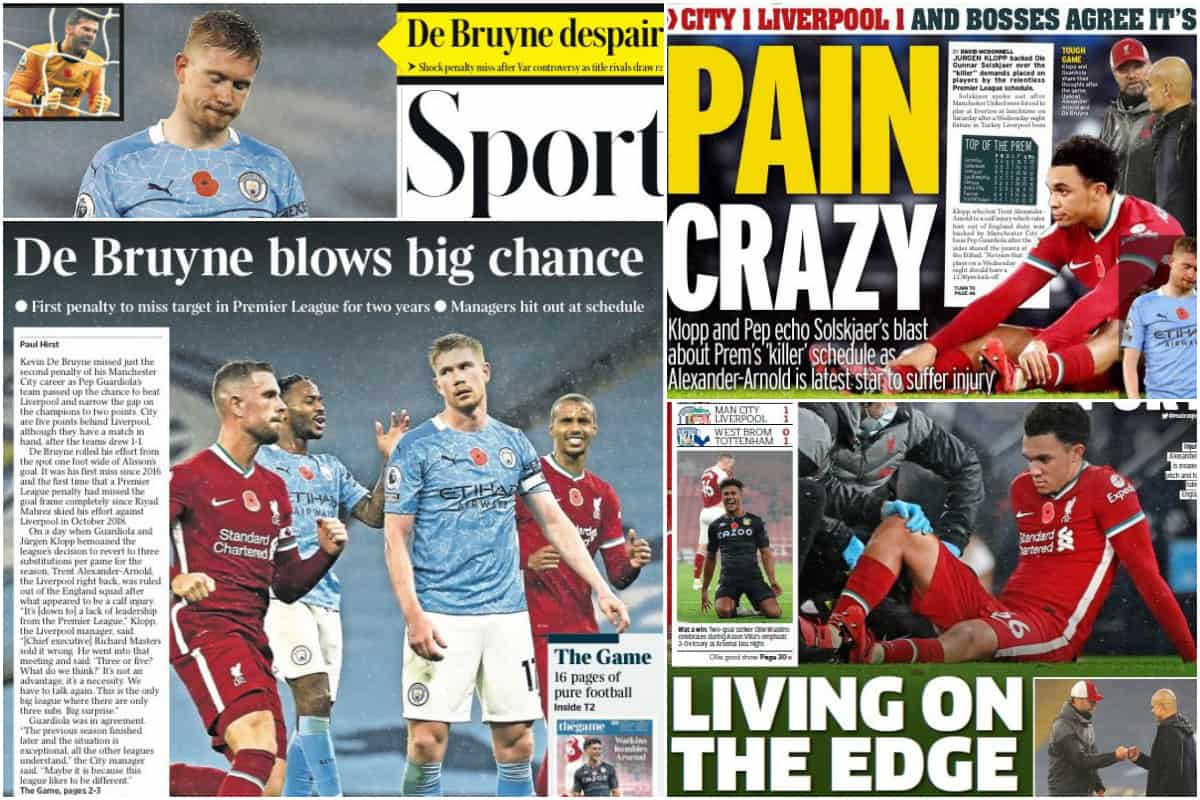 The media assessed Liverpool’s 1-1 draw at Man City a better result for the Reds and felt the second-half fatigue showed a wildly open title race awaits.

It finished all square in the eagerly anticipated title showdown at the Etihad as the Reds earned a solid draw.

Kevin De Bruyne’s missed penalty proved the crucial moment, with the Belgian ensuring his boyhood club retain a five-point gap over his employers going into the international break.

The occasion didn’t quite live up to expectation, but taking a point back to Anfield is certainly a good result.

Here’s all the key analysis from the media on the stalemate.

First off, the Mirror‘s Alex Milne wrote as such as he praised both teams for going all-out-attack:

“Encounters between these two sides don’t often disappoint, and tonight’s match was yet another brilliant advert for the Premier League.

“Both teams went hell for leather, particularly in the first half, and any worries that it could be a cagey encounter were quickly put to bed in what was an end-to-end, largely attacking affair.”

Richard Jolly, writing for The National, felt the draw was the fair result for the way both teams defended:

“The draw felt fair in a terrific game featuring some brilliant football.

“The high-speed attacking illustrated why they have been England’s two best sides over the last three years and, if this was a relatively low-scoring affair, that was attributable to some defiant defending.”

The Liverpool Echo‘s Ian Doyle is in no doubt that the point will prove to be one of the most important earned as the season unfolds:

“A tense and at times attritional scrap with Manchester City saw the Reds secure what could turn out to be their most hard-earned – and most important – point of the Premier League campaign.”

BBC Sport’s Phil McNulty explained that Jurgen Klopp will be the happier manager:

“In the end, however, you suspect he will be happier with a point than Guardiola as the Reds clearly ran out of steam in a second half when the home side looked far more likely to snatch the winner.

“This is a Liverpool team already missing Virgil van Dijk, Fabinho and Thiago Alcantara – and they also lost Trent Alexander-Arnold in the second half – but they still came to a formidable opponent and refused to be beaten.”

Doyle reflected on Liverpool’s start to the season and believes the Reds’ impressive big-game away displays have provided a “solid foundation” to build on:

“Already this season, trips to Stamford Bridge, Goodison and now the Etihad have brought five points and provided a solid foundation in a season unlike any other.”

The Guardian‘s Barney Ronay praised both teams for fighting “enemies”- the fixture schedule and VAR – and still producing such a high-quality contest:

“The purity of that spell of football was a tribute to football’s own resilience in the face of interference from its two biggest enemies right now.

“Firstly, the obvious draining effects of the current jet-lagged season, a place where nobody is ever really fit or fresh or injury free.

“And secondly there was – of course – another unworthy moment of intervention from the video referee.”

The Liverpool Echo‘s Paul Gorst thought the Reds “looked out on their feet” and praised their “mental toughness” in grinding out a point:

“As a result of that hectic few weeks, Liverpool looked out on their feet in the latter stages at the Etihad.

“But, the mental toughness that underpins the technical quality of this team came to the forefront as they held off their hosts to grind out a creditable – and maybe crucial – point.”

The Mirror‘s David McDonnell expressed regret at how the schedule and fatigue ultimately beat both teams and attributed that to the game fizzling out:

“By the end, the teams were fighting their own fatigue as much as each other, the relentless demands of the fixture schedule taking their toll, as both managers seemed content with a point.”

Coming to a similar conclusion, the Independent‘s Miguel Delaney criticised the football bodies for doing nothing to alleviate pressure on teams as the quality on offer becomes compromised:

“The first is on that calendar. Why is football insisting on trying to get every single normal fixture in what is an entirely abnormal season, that has already been truncated?

“It is senseless, and starting to affect the quality of the football on offer.” 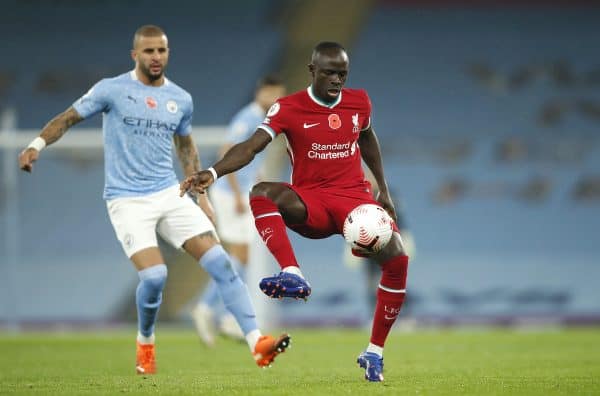 As a result of the schedule, Mark Critchley, also of the Independent, doesn’t think either team will reach the heights of recent seasons and anticipates “a much closer title race”:

“The standard may have dropped somewhat since then. Nobody expects a 99-point winner and 98-point runner-up, given that this is the most peculiar of seasons.

“A point apiece was a fair result, in all, and may just have set us up for a much closer title race.”

Success this season will ultimately come down to which team copes best with all the upheaval, in the view of ESPN’s Rob Dawson:

“The one problem they have got in common is the schedule and it was noticeable that after an entertaining first half, the quality dropped after the break at the end of a long week that included Champions League commitments.

“In a title race with no clear favourite, it will come down to who can deal with their problems best.”

And Dawson later stated that this stalemate showed “this season’s title race is open to anyone”:

“After 90 minutes between the Premier League‘s best two teams there was no clear winner, and if anything, Manchester City‘s 1-1 draw with Liverpool served as more evidence that this season’s title race is open to anyone.

“After a weekend that saw Southampton, Tottenham and Leicester all lead the table at one time or another, stalemate at the Etihad Stadium reminded the chasing pack that this year they have a chance.”

Milne thought the new setup showed plenty of promise and will be particularly effective against the weaker Premier League sides:

“It was a risk which certainly paid off initially, with Liverpool looking much more inventive, threatening and dangerous than City throughout the vast majority of the first half.

“There is no doubt that the attacking quadruple of Mane, Salah, Firmino and Jota is one which could well tear apart weaker sides than City, and Reds fans got a tantalising glimpse of what could be to come in the future.”

“Sure, there will be regrets. Liverpool regularly found themselves haring down on the City defence during the first half, but were too often guilty of overelaborating or curiously choosing not to shoot.”

ESPN’s Nick Judd thought Klopp made one key error – namely taking off Roberto Firmino as the Reds’ attacking threat suffered without the No. 9:

“Liverpool’s attacking capabilities faded in the second half, as Roberto Firmino‘s withdrawal saw them unable to link the play as well They only grew sloppier as the match went on.

“Klopp got the substitution of Firmino wrong, though; Xherdan Shaqiri struggled in a deeper position when a more natural midfielder might have been a better option.”

Meanwhile, Karl Matchett, writing for the Independent, expects Klopp to return to 4-3-3 and rotate the front four to ensure the Reds have firepower to call upon:

“There were chances for all four, Firmino notably opting out of lobbing Ederson within the first few seconds, and the tactical shift involved in starting each of them showed Klopp is happy and able to alter the team as needed.

“In future games it’ll likely give the Reds an extra goal threat off the bench rather than starting with the quartet all in place, but they certainly gave City problems to fix in the first half.” 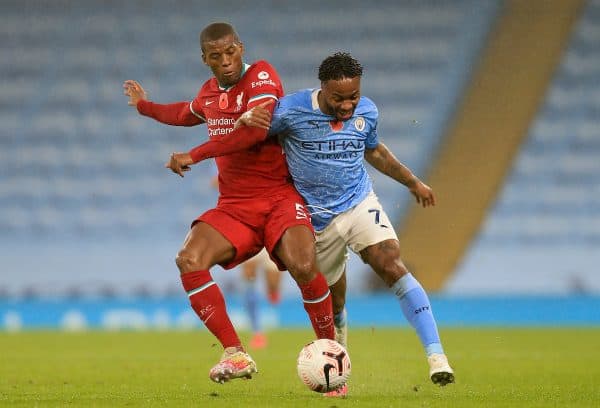 “In this formation the Liverpool captain needed to be a one-man wall and few players in England could have done the job he did here and not been overrun. Superb, ugly side of the game work.”

Judd was equally impressed with Gini Wijnaldum and as assessed that the Dutchman adapted perfectly to the two-man midfield:

“The Dutchman’s efforts were superb when you consider Liverpool played with just two midfielders for much of the game. Rarely gave the ball away and was everywhere throughout.”

“Joe Gomez continues to impressively shoulder the extra responsibility – joined by the steady Joel Matip for a 37th different starting centre-back pairing under Klopp – while Alisson Becker’s safe handling and sweeping offered another level of protection.”