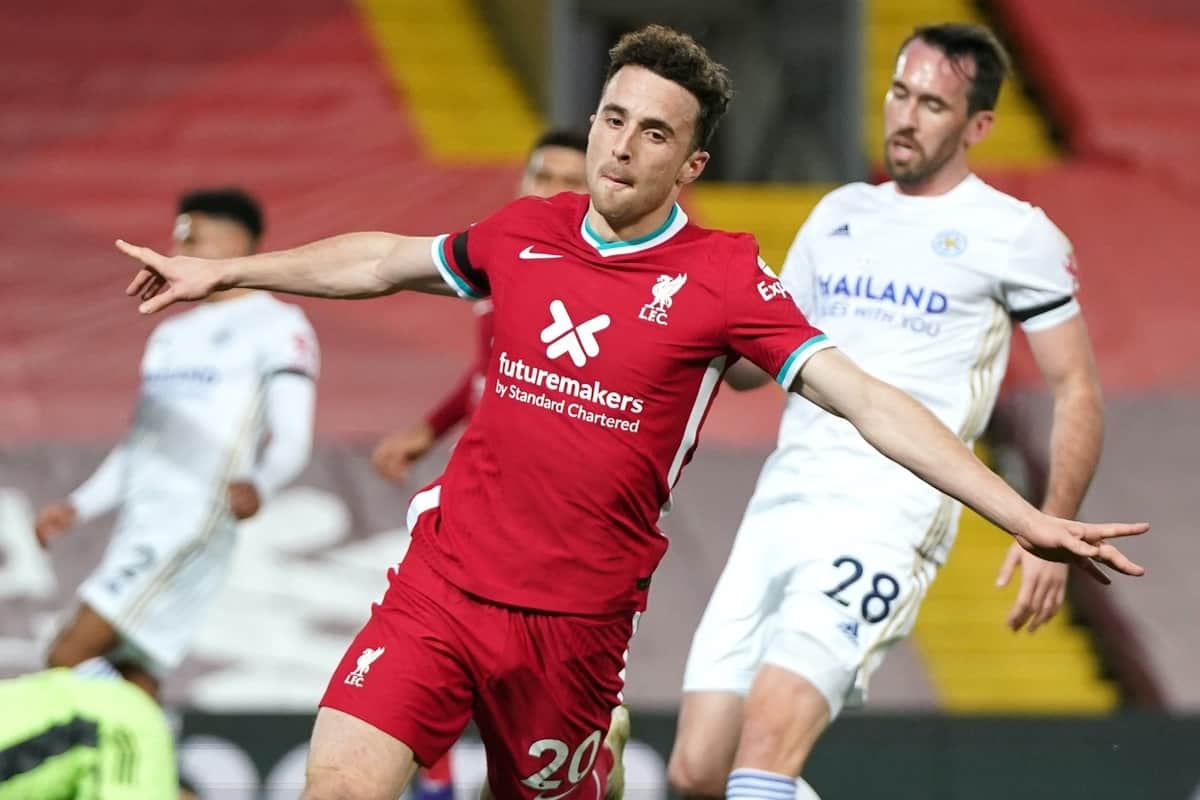 Liverpool were restored as joint league leaders with an emphatic 3-0 win over Leicester on a record-breaking night at Anfield, and fans were duly delighted.

The Reds were back on home soil following the conclusion of the international break aiming to extend their unbeaten run at Anfield and leapfrog Leicester.

Jurgen Klopp’s side started the brighter of the two and their efforts were duly rewarded with a Jonny Evans own goal from a corner delivery, with Diogo Jota adding a buffer on the cusp of half-time after latching onto a stunning pinpoint cross from Andy Robertson.

The second half saw the Reds create a number of openings despite the Foxes starting to pile on the pressure as they looked to peg back the deficit, only for the hosts to stand strong.

And the quality of the champions shone, with Roberto Firmino adding the finishes touches with a fine header to seal all three points in emphatic fashion – a result which stretched Anfield’s league unbeaten run to a club-record 64 games.

DIOGGGOOOOO!!!! Fantastic work by Robbo to beat his player and put in a wonderful cross. Pure strikers finish that too.

Diogo Jota. What a player.

What a supreme competitor Andy Robertson is. Gave everything for Scotland in play-off v Serbia, then 90mins in Israel on Wed, now delivering for #lfc here. Brilliant control to tame crossfield ball, touching it past Albrighton, then whipped in perfect cross for Jota, 2-0.

Everything about that goal is sublime. The delivery from Robertson, the movement from Jota, the technique on the header with the ball arriving at such pace.

“Fukin’ brilliant. The number of times that Robbo beats his man trapping the ball is sheer class, and the cross was even better.”

They’ve managed to sign another Mane and Salah, haven’t they? Jota is another level

Diogo Jay is scoring every kind of goal. I want to ask Michael Edwards’ excel sheet what next weeks lotto numbers are

Constantly making the right decision, where to pass, what space to fill, when to cover, when to press

Starting to doubt Curtis Jones is 19. Far too mature in possession.

Jimmy Milner deserves a chocolate digestive with his cuppa later.

This is why everyone wants to play for Liverpool and Jurgen Klopp he and his management team will take your ability to levels you dreamed of as a kid.

state of these running at milner, the man is 84 years old have some shame

Ridiculous how dominant Liverpool were tonight. Without six first-choice starters and were able to play like that.

Milner, Jones, Matip and before his injury Keita all outstanding as 'stand-ins'.

Keita is cursed. He always breaks down when it looks like he’ll make the next step.

It really hasn't been great for Naby at LFC. He's had a good couple of short spells but injury has plagued his time here! Hopefully this won't be all we remember his LFC career as.

“It almost defies belief how often he is injured. You have to feel for the young man.”

There seems to be a lot of people who have forgotten Naby Keita played two full ninety minute matches for his country.

For all the pre-match talk, the performance, and Firmino’s goal, was rightly lauded…

Sadio Mané has absolutely everything. The lot. A plateful. The complete works. Bloody love him.

Alisson is a wild man & I love him

Firmino did look so much better and fitter today. Hopefully this kick starts his season.

So happy for Firmino. Even without that goal, he was excellent tonight. Look at how the other players mobbed him. They know his importance and they’re delighted for him.

Loved the Reds tonight, so much quality. Great result, great performance. Jota, Curtis, Robbo and Milner outstanding and Bobby's goal just the icing on the cake.

Buzzing for Bobby there. What a great performance from the Reds.

Come and behold them.

“They all wrote us off before this match. The question wasn’t just that Leicester was going to win, it was by how many. And we put them back in their place. Fuck off.”

A brilliant statement from the Reds there. The Anfield unbeaten league run now stretches to a club record 64 games. Simply phenomenal. Exemplifies the consistency and mental fortitude of Klopp’s side.

It's getting results & performances like that which makes Klopp the best manager in the world. Depleted squad, tough top of the table clash – emphatic 3-0 win. Champions. #LFC

Nobody is taking this league off us

Incredible. A perfect night aside from the Keita injury. Second or third best performance of the season from a seriously depleted side. Liverpool are so relentless it's almost funny. #LFC

What a performance that was. Performance of Champions.

What a statement victory that is, magnificent stuff.

It feels as though so much is going against Liverpool at the moment, but they're dealing with it unbelievably well.

Another giant middle finger to the doubters.