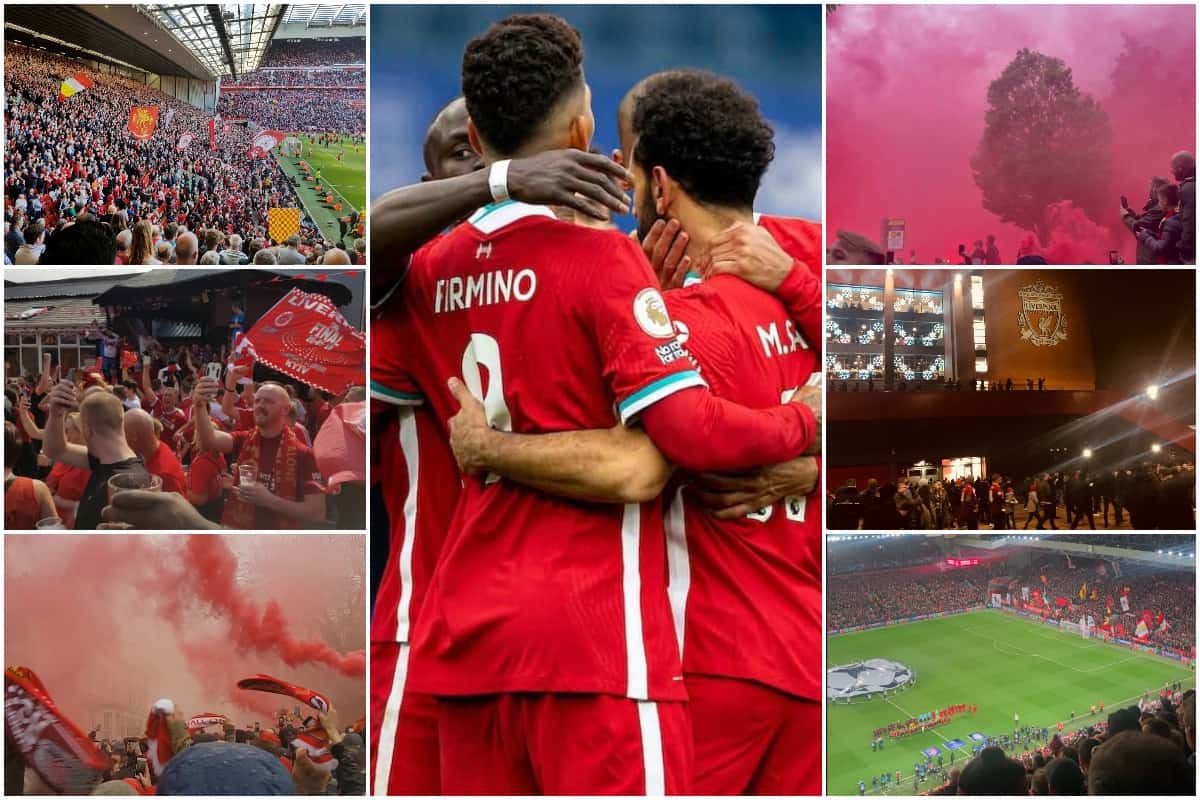 With football without fans now stretching into its eighth month, its absence in the lives of Reds continues to be felt as rituals, relationships and new experiences are put on the back burner.

The last time Anfield was packed to the rafters was against Atletico Madrid back in March, the final professional game in the country to be played in front of spectators as coronavirus swept around the world.

While football has safely resumed since then, it has been without the lifeblood of clubs and the impact is being felt by all parties.

For many, going to a game presents a chance for escapism, to be with like-minded people, to share in an experience which is more than just yourself and everything in between.

The game itself is only one facet of the experience for match-going fans and its absence is felt differently from supporter to supporter.

Here, we get the views of Danny Gallagher (@Danny7Gallagher), Nick Collins (@Nick___Collins), Jay (@jaytothelo), Keifer MacDonald (@KeiferMacd), Joanna Durkan (@JoannaDurkan_) and Jeff Goulding (@ShanklysBoys1), who all discuss what they miss most about going to the game, home or away, and also what they’ve found they don’t quite miss.

DANNY: The pre-match angst, which is a strange one given that being put through the motions on a match-day is never a pleasant experience.

With Jurgen Klopp‘s Liverpool over the past 18 months this has become very much part of the ritual. Not the conventional pre-match angst, but those frenetic nerves of knowing that to stack one win atop of the last puts Liverpool that bit further ahead than the rest, that bit closer to the promised land.

This culminates between the Sandon and the main stand steps. That short walk through a swirl of bodies and flashes of red provides all the pre-match medicine it needs to… and then it’s time to watch Europe’s best.

NICK: The daily life struggles disappear for those couple of hours at Anfield. A sense of belonging, the atmosphere and the community aspect of it, everyone knows each other’s names and we have a good laugh too.

I alternate going to the match with my two girls and a mate, so I really miss driving over with the kids and just spending time with them – seeing their reactions for the goals and seeing them sing and chant, especially if there is a new one.

I will always miss the roar of the crowd and feeling as if we are all one person willing the team on! 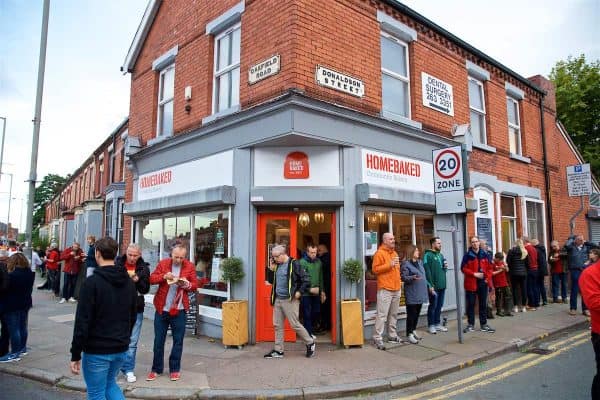 JAY: There’s a lot of familiar faces you see whether home, away and Europe and that in itself is somewhat comforting.

I miss the pre-match buzz around the stadium and the thrill in the stands. Also, I’m really craving one of Homebaked bakery’s vegan Scouses, perfect for a cold Champions League night at Anfield.

KEIFER: The match has been such a huge part of my life, especially during my later teenage years. Going every week with my mates, up and down the country and across Europe is something you always think is going to be the one constant.

Jobs, houses, relationships can all come and go, but the match is the one thing that you can bank on at the end of a long week.

For me, especially since I moved away to university the match has taken on greater importance. With the stresses of living away, having to become more of an adult (ish) it’s always been my body calendar.

To me, it was never Monday, Tuesday or Wednesday, or ‘nearly the weekend’. It was Southampton tomorrow, or three days till this game or that game. Something to look forward to and where you could see those familiar faces, in the ground or in the pub.

For me, that’s been the hardest part about not going. Because as much as the match itself is fantastic, it’s everything that surrounds it which makes it so great. 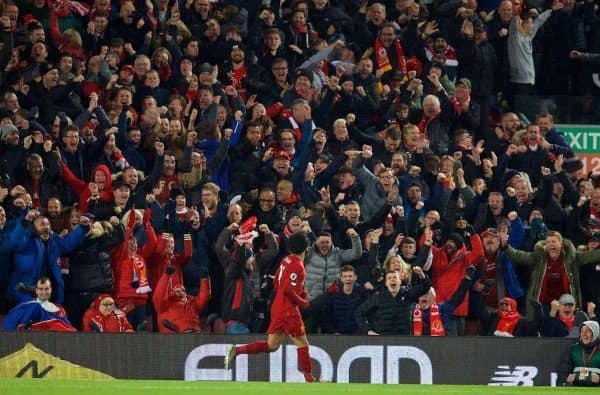 JOANNA: It’s the anticipation of what is to come, the countdown throughout the day from when you’ll leave the house, to the drive and then figuring out where in the hell you’re going to park.

The emotion it all evokes is not one which can be replicated with anything else and while my chances to go the game each season are limited, having it eliminated completely has left a gaping hole.

It’s really the little moments you come to cherish within all of this, sharing it with those around you of which many, if not all, are complete strangers.

JEFF: Like most match going Reds, the game itself is only part of what following Liverpool is all about. It is, of course, the most important aspect, but for me going the game involves a whole routine, rituals, daft superstitions and camaraderie.

When I think about the things I miss most, it’s that knot in my stomach when I wake that’s as much about meeting the lads in the pub, the arguments, debates and laughter, the sights, sounds and smells around the ground. Almost as soon as I rise, I’m anticipating the journey to the ground, the crowds marching up Utting Avenue, the colours of their shirts and the kids’ scarves flapping in the breeze as they chatter excitedly, the queues outside chippies, the cries of the fanzine sellers and the buzz of conversation and clatter of glasses from inside the Arkles as I pass it on the way to my own favourite watering hole.

Most of all though, its about sharing the whole experience with mates and even with strangers. The feeling of childlike awe as you gaze across that glorious green grass and the rage of pride that explodes in your chest as the ref signals the start of the game. “Get into these Reds!” And then, that sound; the Kopp in full voice. I miss it all so much.

I feel only a fraction of that from my couch, maybe a fraction of a fraction. We need to be in there, feeling it, drinking in the emotion and atmosphere as much as our club needs us there. Football without supporters is a necessity, but it’s no less unbearable.

What you don’t miss, but might actually have back in a hurry… 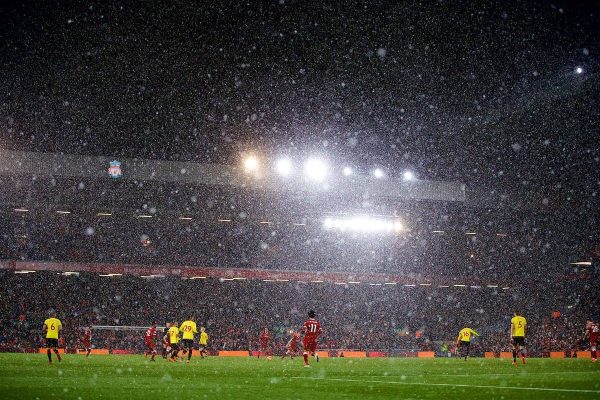 DANNY: Stand managers. Every club has them, and unfortunately, Liverpool is no different.

There’s always that one bloke who knows better than anyone, better than Klopp even, as to why Gini Wijnaldum must come off, or why Andy Robertson‘s through-balls aren’t finding their target… and he has to let everybody know.

Truth be told, I never thought I’d miss ‘that guy,’ and there are plenty of him, but I do. Fans have been away too long and to see Liverpool climb back on their perch without them was a huge heartache.

Still, the slow, filtered walk across Stanley park after another 0-0 Everton goalless victory doesn’t feature high up on the list of things missed. Here’s hoping Anfield sees its lifeblood back soon.

NICK: Sitting in a wheelchair for two+ hours without moving about, it does get extremely cold, even with several layers of clothes on!

Oh, and having to beg any/everyone for a spare away ticket!

KEIFER: We’ve been fortunate in recent years. The recent on-field success makes it so that there doesn’t seem to be that much that can ruin a good day out anymore!

But if I had to pick one, it would be the travel. Especially on the European aways as I’m not the best with flights or long-distance travelling.

One of the last trips before lockdown was Atletico Madrid. The trip was great, but there is absolutely nothing worse when waking up the next day hungover, skint and miserable. Then to have to get on a flight for about two hours or so, it can push you to the edge at times – especially if the Reds have lost!

But I’d happily take a hungover flight back from any European destination if it meant being able to go back to match!

JOANNA: I certainly do not miss the gridlock to get out of any car park or any road in and around Anfield after the game, it is a nightmare – especially when we haven’t won as no one is in a mood to give way.

In saying that, I’d wait in a queue for hours if it meant I could be back watching the mighty Reds at Anfield.

JEFF: I don’t miss the moaning. The Kop has always had its share of malcontents down the years. Those for whom nothing is ever good enough.

These people are silent when the team is flying and pipe up with gut-churning regularity at the first sign of trouble. They single out a player or players and they’re on their case constantly. They are thankfully a minority, but they can turn a tense game into a nightmare sometimes. At least on my couch, I am free of that lot.