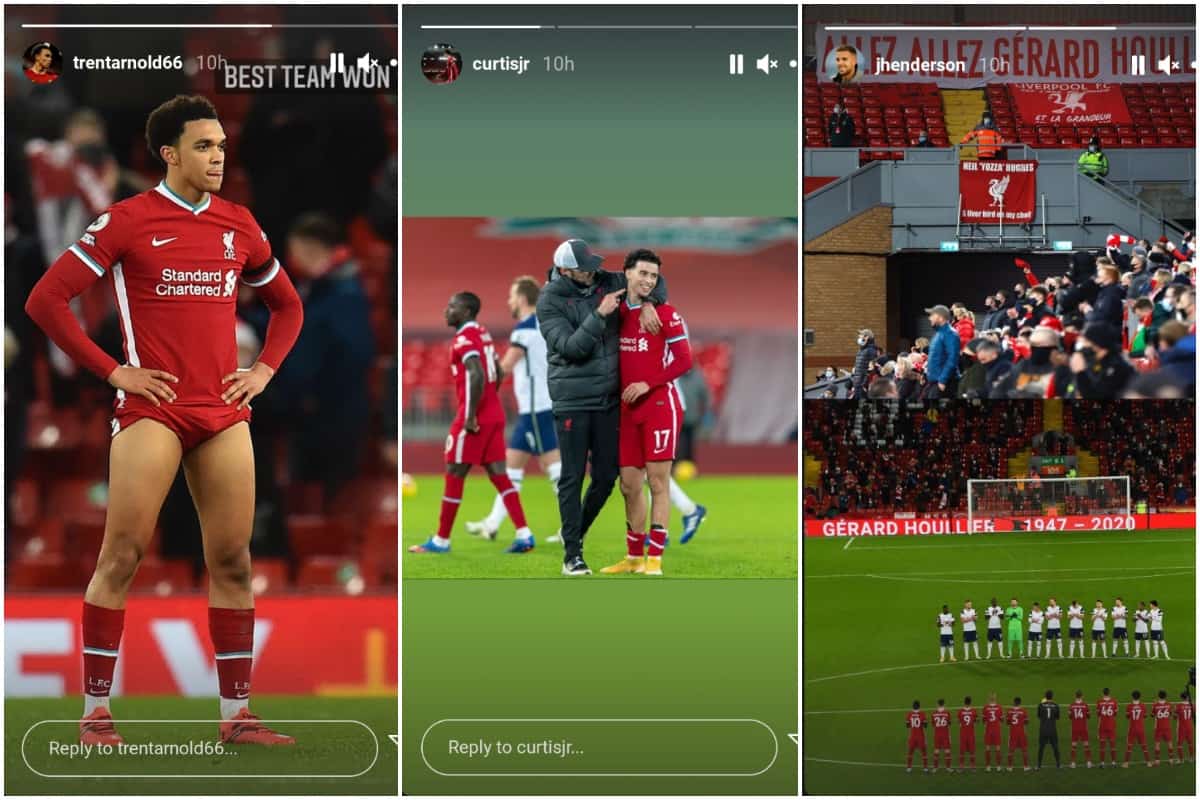 Liverpool returned to the Premier League‘s summit after an almighty Anfield effort yielded three points late on and the players know exactly what it took to produce the win.

A lethargic showing at Craven Cottage meant a disappointing weekend draw instead of heading into this game top, but perhaps one knock-on effect of that surprising result was a bigger performance this time right from kick-off.

The Reds were dominant, exciting, adventurous and committed in what was very much a case of one team going for the win and the other hoping they might possibly get it if everything went perfectly.

The game plans from the two teams were night and day, and despite Jose Mourinho’s post-match declarations that his side deserved all three points, Trent Alexander-Arnold and one or two other Reds made it abundantly clear on social media they disagreed.

Andy Robertson was a little more diplomatic than his fellow full-back, but no less vehement for that in explaining exactly why the Reds deserved the win – and all “felt it” as a big moment when Bobby Firmino’s winner hit the back of the net.

Speaking to the club site, Robertson said it was a huge step for the Reds to take, but knows the circumstances of the season means those chasing Liverpool will be much closer this year.

“When you play against a big team, obviously top of the league – they were first going into this game – scoring a last-minute winner is big. All the lads felt it,” he said.

“But it’s only big if you use it in the right way and you try to kick on from it. We’re top of the league for tonight but there’s still a long, long way to go.

“But it’s a big win against a really, really good team. We created good chances, we dominated the ball first half; the second half was a bit more even.

“We’ve beaten a good team tonight and it’s always nice when you do that. But they’ll be there, they’ll come back again and we need to be at our best every game to stay top now because there’s a lot of teams trying to catch us, it’s a lot closer race this year and it will go the whole way.

“We just need to keep doing what we’re doing, focus on us and keep picking up three points as much as we can.”

There was also praise for Roberto Firmino and his crucial return to scoring form, with Robertson pointing out the No. 9 made it almost all the way back to the Kop in his celebrations!

“I’m so happy for Bobby scoring the goal, you see how much it meant to him.

“It would have been a lot nicer if it was at the Kop end – obviously Tottenham had switched it round, which is fair enough. But Bobby certainly made a dart for it anyway, he was nearly halfway there!

“Tonight they were fantastic. Hopefully we’ll see them again on the 27th and hopefully we can give them a nice Christmas present.”

Elsewhere, the cheeky (and spot-on!) themed response around the ‘best team won’ was repeated more than once as the players took to Instagram after the game.

The winning goalscorer and league debutant came in for praise…

Fantastic team performance for a well deserved 3 points. Rhys on ? and what a winning goal from Bobby #siseñor #catchmeifyoucan #YNWA pic.twitter.com/4UjYQjvUxw

And the squad were, overall, simply delighted to produce a big performance and get a big win in a big match on a big night!

Top of the table for the mighty Reds, now it’s about consistency as staying there, as Robbo rightly pointed out.

Palace next, then an unusual week of rest over Christmas. Let’s start to clock up those wins!