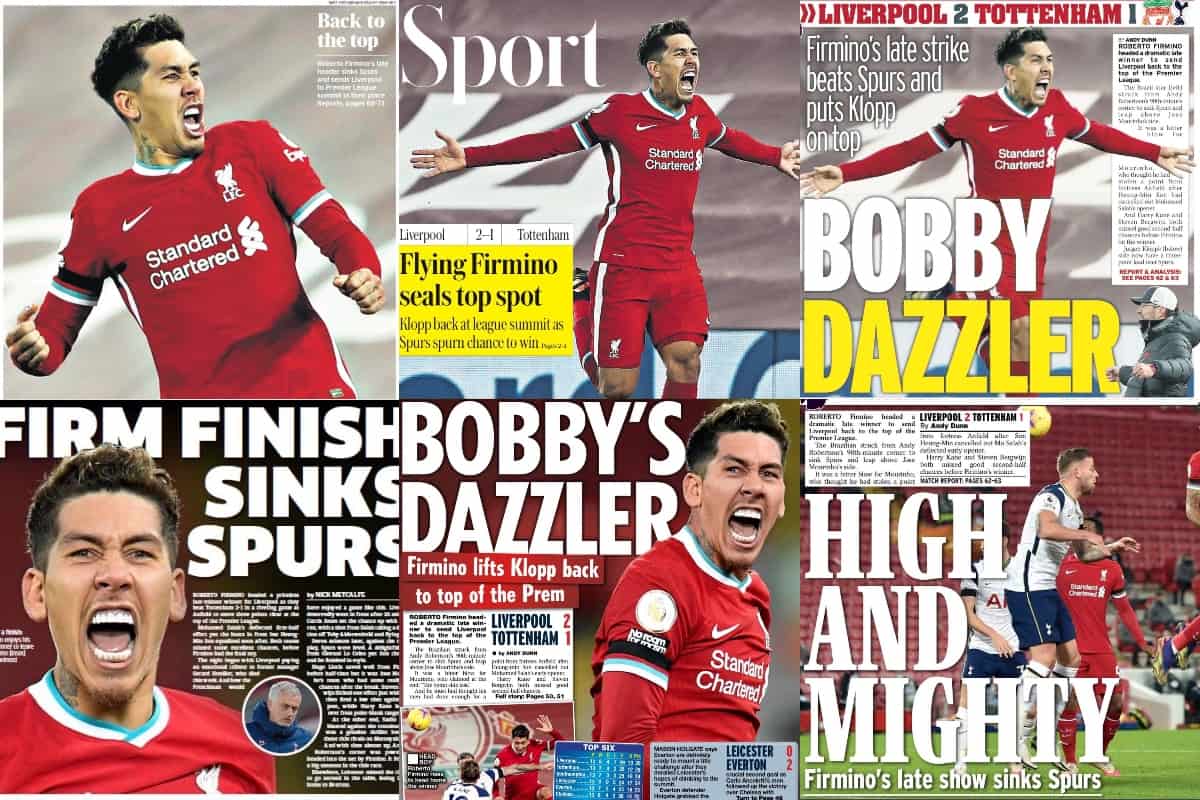 The media assessed Liverpool’s 2-1 win over Tottenham as a big victory in the title race and for football as Jurgen Klopp overcame Jose Mourinho’s anti-football.

What a performance, what a win, what a team.

Jurgen Klopp‘s mentality monsters stood up and delivered once again to return the champions to their rightful place atop the Premier League table.

The depleted Reds produced a garguantuan effort and got the deserved rewards, as a glorious injury-time header from Roberto Firmino won the title rivals showdown.

What a sweet victory it was, and here’s how the media assessed a memorable night at Anfield. 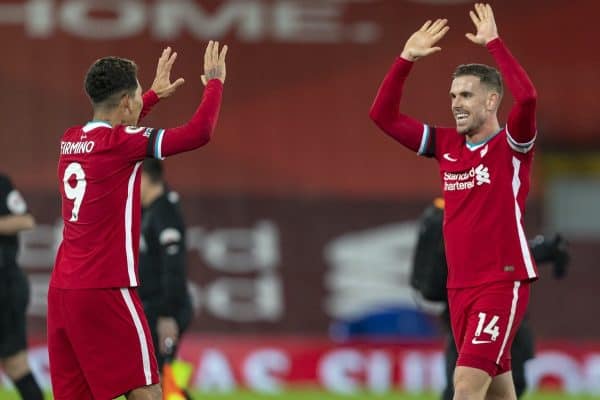 First off, the Mirror’s John Cross wrote that it was a victory which showed exactly why the Reds are the reigning champions, as they know how to get the job done:

It was heartbreaking for Tottenham but showed exactly why Liverpool are reigning champions because they never give up, they go right until the end and nearly always come out on top.

But Liverpool have the wonderful knack of finding a way to win. It is the hallmark of champions and, even when they are not at their absolute best, they hold their nerve and get the job done.

Writing for Goal.com, Neil Jones said it was a huge victory for the title race for the psycological impact it will have on both sides:

It may only be December, but this was a huge result. The champions are going nowhere.

The Mail’s Martin Samuel labelled it a win of “guts and determination” and feels that at a time such successes are needed more than ever, this makes the Reds firm favourites:

This was a victory of great guts and determination in a season that may yet simply be won by the team with most courage.

It is hard to see beyond Anfield again, if that is the criteria.

Meanwhile, Cross believes that, alongside the boost from this win, Liverpool’s trophy-winning know-how provides a big advantage on the closest challengers:

They also have a group of players who know how to win, experienced campaigners with Mo Salah and Firmino on target, Andy Roberston outstanding from left back and also Curtis Jones emerging as such an exciting young talent in midfield.

The Telegraph’s Chris Bascombe believes it is only due to Liverpool’s injury crisis that there is a title race in the first place and that a full-strength Reds team cruises to another title:

This was a performance which underlined that only Liverpool’s injury setbacks – allied to these trying times – will keep this title race more interesting for neutrals than it would normally be.

Liverpool are comfortably the best side in the country even with a couple of teenagers in the team. With a full contingent, they might already be preparing a procession.

Leading this was the Telegraph’s Jason Burt, who was the man to assess that this wasn’t just a win for Liverpool, but one for football:

Nevertheless Liverpool deserved their win. For much of this game it felt like football versus anti-football and the problem for Mourinho is when he takes this approach and loses, albeit so late, then it feels he can legitimately come in for criticism.

Barney Ronay, of the Guardian, assessed that the winning goal was Liverpool’s reward for a “fearless” performance in the biggest game of the season:

Liverpool went all-in, fearless in their all-out team attack and were rewarded at the end with a brilliant winning goal.

Carl Markham, writing for the Irish Independent, explained how it was Mourinho’s negativity that provided the Reds with the encouragement to keep pushing for the win:

It appeared they would be frustrated by a Mourinho game-plan which everyone predicted and which the Portuguese seemed satisfied enough with to replace midfielder Steven Bergwijn, who hit the post in the second half and looked a threat on the counter-attack, with left-back Sergio Reguilon with 15 minutes to go.

But Jurgen Klopp’s men have seen this sort of thing before and encouraged by their opponents’ passivity continued to drive forward and that eventually brought its reward.

The Independent’s Miguel Delaney analysed how Mourinho’s ‘percentage football’ in such games proves counter-productive as it invites trouble and self-inflicts defeat:

But that can’t quite be argued as vociferously when you willingly reduce the game to fine margins. This is the wider point. In these games, Mourinho plays percentage football. He cedes possession, and looks to catch teams on the break or – as in the case with those two second-half chances – with aerial bombardment.

It is just that, in a world with this Liverpool, ceding the game in this way is arguably much more risky than Klopp’s willingness to push up so far.

On a similar train of thought, the Mirror’s Darren Wells felt Spurs may well have come away with a result against the depleted Reds had they shown more attacking ambition:

But had Mourinho taken the shackles off his team they may well have come away with more to show for their efforts.

That was a constant threat to Liverpool, and had Spurs taken their second half chances, Spurs may well have got more than Mourinho bargained for. Liverpool struggled to deal with Tottenham‘s high press at times, but Mourinho stuck to his play-safe tactics, and eventually lost out.

And Jones praised Liverpool’s defence – particularly the centre-backs – for producing such concentrated performances and avoiding big errors which Spurs were waiting to pounce on:

Classic Mourinho, you could say, his team determined to shut off the home side’s rampaging full-backs, content to play on the break and take full advantage of mistakes.

To Liverpool’s credit, there were not many, certainly not from Fabinho, nor from Rhys Williams, the 19-year-old playing alongside the Brazilian at centre-back.

ESPN’s Tom Fenton thought Klopp got his tactics spot on and commended the boss for being brave and sticking with the starting team to get the job done:

Klopp appeared to get his team selection spot on, as the side looked sharp and up for the fight from the outset. The first half was a perfect representation of what Liverpool can do when they are at their fluid best, as some of the football on show was simply masterful.

In the second half, the game was more evenly balanced, but he showed faith in the players on the pitch by not making any substitutions. His faith was massively rewarded.

First of all, the Liverpool Echo’s Ian Doyle attributed the win to the Reds’ “unshakeable belief” and praised Klopp’s men for bouncing back to Fulham frustration “in a manner befitting champions”:

But what this Liverpool side possess, perhaps more than any other, is an unshakeable belief their methods can prevail right through to the final minute. So it proved.

Injury-hampered, weary-legged and smarting from the weekend draw at Fulham, the Reds responded in a manner befitting champions against their chief contenders to leapfrog Tottenham Hotspur and move three points clear at the summit.

Fenton was particularly impressed by the excellent counter-pressing on display:

Liverpool showed serious intent from the first whistle; the tempo was ferocious as they looked to make a statement against their title rivals.

More than anything, the hunger to get the ball back will surely please Klopp most of all.

Karl Matchett, writing for the Independent, explained how Gini Wijnaldum winning the midfield battle against Pierre-Emile Hojbjerg was key to Liverpool’s success:

The two No. 5s clashed three times in the first 45 minutes, the Dane fouling the Dutch skipper on each occasion, and the Spurs man didn’t get much nearer the ball elsewhere either: at the break it was 48 touches to 19 in favour of Wijnaldum and 43 passes completed to just eight.

It was indicative of the control of the game the Reds had and Hojbjerg’s influence was further negated after he was booked early in the second half. 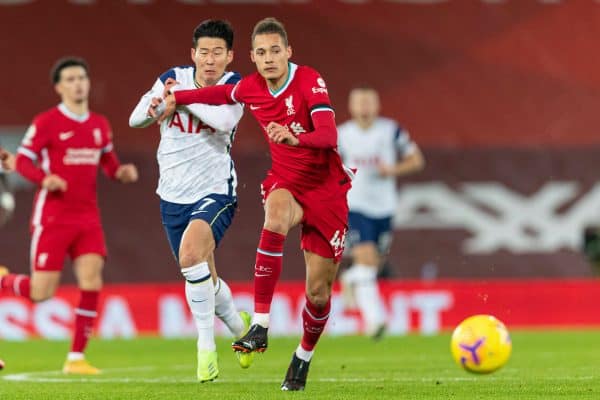 Wells singled out Curtis Jones as Liverpool’s man-of-the-match and believes the youngster should be a starter in the first choice midfield even when all options are available:

With so many top stars still due to come back, it looked inevitable Jones’s involvement would probably reduce in the months to come.

Though based on his latest display, Jones will be one of the names Klopp will be keen to leave on his teamsheet.

Ronay praised Jones and Rhys Williams and assessed that both youngsters should now be regarded as genuine first-team options:

The sight of Liverpool’s young players performing at this level in such a thrillingly tight victory will refresh the options within his squad.

Finally, Fenton picked Liverpool’s full-back duo as the key men on the night:

In addition, the Reds were also very creative in the final third, with full-backs Andrew Robertson and Trent Alexander-Arnold both playing a key role in building up play.

Now it’s on to a reasonably in-form Crystal Palace and the start of the Reds’ Christmas run of fixtures. Staying top would be the best present!