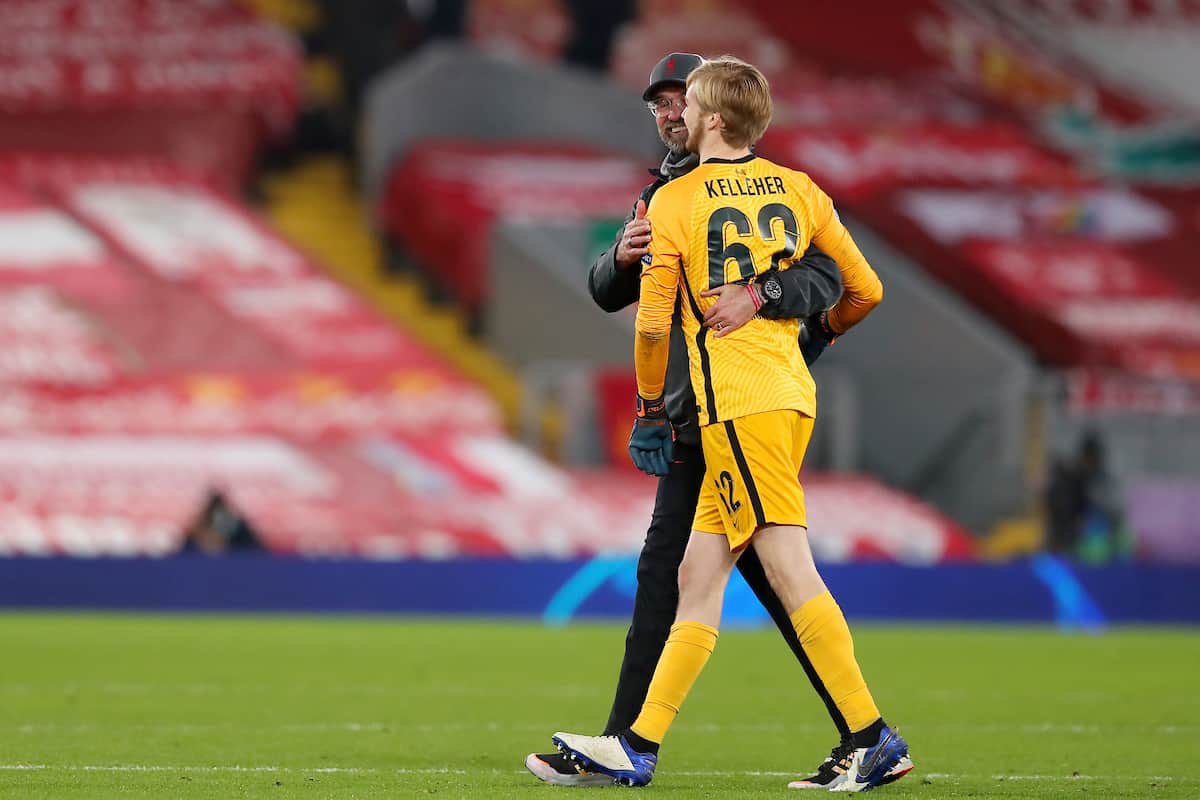 Caoimhin Kelleher‘s “natural footballing ability” as all but seen him usurp Adrian as Liverpool’s new No. 2 as Jurgen Klopp explained his reasoning behind the youngsters start against Ajax.

It was a night to savour for the Reds as they sealed their safe passage into the last 16 of the Champions League with a 1-0 win over Ajax, where the club’s youngsters stood up to the task.

Neco Williams and Curtis Jones were the two to combine for the only goal of the game, while at the other end of the field Kelleher excelled on his Champions League debut.

The 22-year-old was a surprise inclusion ahead of Adrian after Alisson was an enforced absentee with a hamstring injury sustained during the 1-1 draw at Brighton over the weekend.

The Irishman made a number of top saves and was calm and composed both with and without the ball, a clear point of difference from the occasions Adrian has stepped in this season.

And Klopp explained the key point behind his reasoning in starting Kelleher ahead of his more senior teammate was his “natural football playing ability,” hinting that the young ‘keeper has now moved ahead in the pecking order.

“Yeah [Kelleher was fabulous]. I really think Adrian did for us an incredible job when he came in late last season,” Klopp explained to BT Sport post-match.

“And because he’s a really good shot-stopper as well, we made that decision. They are all calm in the moment when they get the information but there’s a difference to be that on the pitch.

“I’m really happy how he dealt with it and how calm he was and how good he was. It was a good game!”

A clean sheet was recognition for his impressive work between the sticks at Anfield and having shown the level of confidence required in addition to a calm nature, he looks poised to start on the weekend against Wolves in the continued absence of Alisson.

A BIG save from the #UCL debutant in the 88th minute! pic.twitter.com/nvHBJxvTCC

It will be a night to remember for Kelleher, who became the youngest Liverpool goalkeeper to start in the Champions League since Scott Carson in 2005, and Klopp was overjoyed by how his team continues to dig deep as hurdles keep coming their way.

“Honestly, since I’m in Liverpool one of the biggest Champions League nights,” Klopp added. “Without supporters in it was the most important, the most difficult and the most exceptional game.

“All the circumstances, all the things about what’s going around, not a lot of things that you smile over a day just because of the injuries, it’s tricky and then the boys throw themselves in that game.”