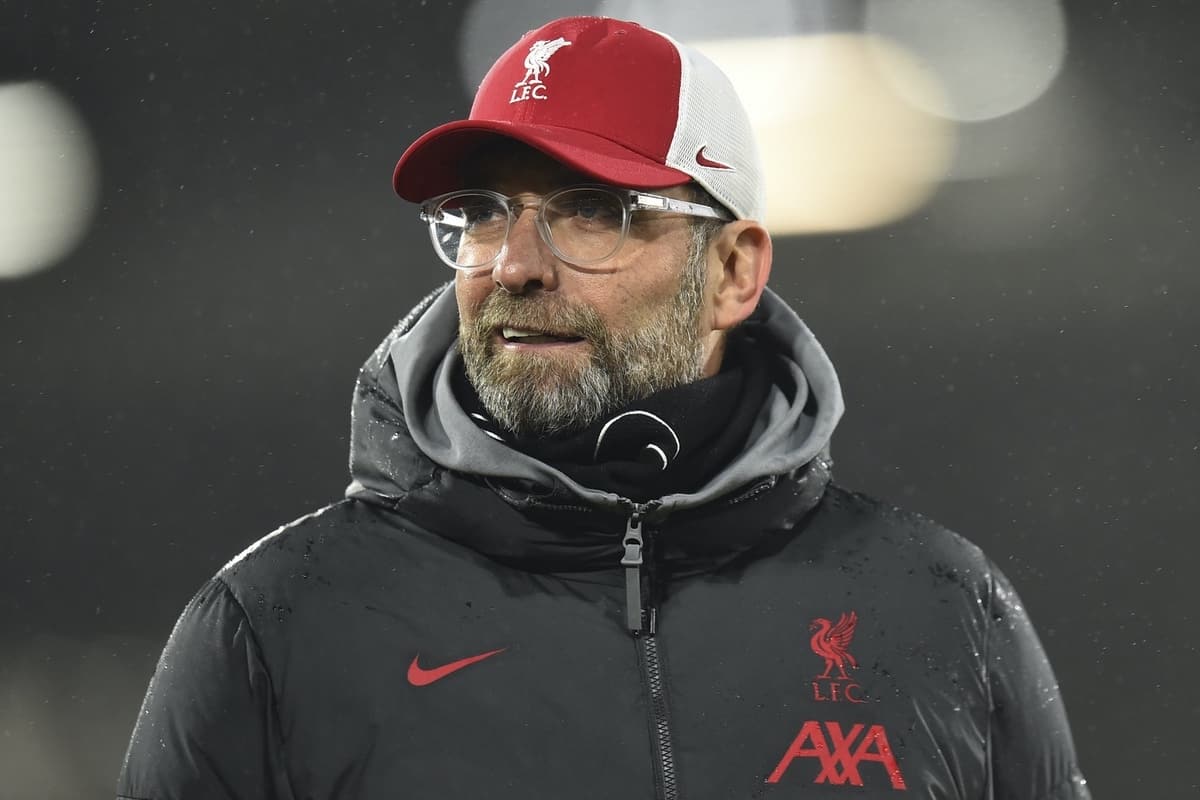 It’s another tight turn around for Liverpool and Jurgen Klopp could look to rotate his side as they travel to St James’ Park to meet Newcastle.

The Reds failed to deliver a late Christmas present last time out despite having the luxury of an eight-day break, and with extra personnel available the boss could now look to mix up his side.

A 72-hour turnaround is what Liverpool have to work with before they meet the Magpies as they look to rectify their latest misstep and get back on the winner’s board.

While another blow was delivered to the defensive ranks, Klopp has been boosted by the return of a handful of players over the last week and fresh legs with an eye to what’s next could be the way to go.

The boss is known to throw a surprise XI or two in throughout a season and the personnel at his disposal provides flexibility which has not been common in 2020/21 to date.

With three valuable points on the line once more, here’s how the Reds could lineup at Newcastle.

The merry-go-round of injuries continued over the weekend as James Milner and Xherdan Shaqiri‘s return to the matchday squad was soured by setbacks to Naby Keita and Joel Matip.

The midfielder was ruled out prior to the meeting with West Brom with an undisclosed muscle injury, while Matip succumbed before the hour mark with an adductor issue which the Reds are awaiting results of a scan as to the severity.

Both will now remain sidelined for the short-term, at the very least, leaving the likes of Rhys Williams and Nat Phillips to step up to the plate once more in defence.

Thiago, meanwhile, continues to make all the right steps in training but it remains unclear if he will travel to Newcastle as he looks to build up his match fitness after over two months out.

While the latest injuries are another blow, there is still scope for a level of rotation which Klopp has been starved of throughout the campaign.

Takumi Minamino, Milner and Oxlade-Chamerbalin are just three names to put their hand up for selection and the boss has a number of things to ponder as he will also slightly cast his eye to Southampton which comes five days later.

In the knowledge that another extended break, five days, awaits after the final whistle, there is certainly scope to look for consistency in the XI.

It would result in just a single enforced change from the side that met the Baggies, with Matip replaced by Rhys Williams at the heart of the defence.

The 19-year-old has been favoured over his more ‘senior’ counterpart in Phillips when injury has come into play at the back and having been given the nod against West Brom, he could be the man once again to help stop a Newcastle side who have scored 17 goals in 14 league games.

He would nestle in alongside four of the usual suspects in the defensive line in Alisson, Fabinho, Trent and Robbo.

Klopp spoke of his expectation of his side responding after the weekend’s draw and it would not be a surprise to throw the same XI out and demand a much-improved performance.

It would see Jordan Henderson, Gini Wijnaldum and Curtis Jones continue in midfield with the usual attacking trident in a side which would look like this: 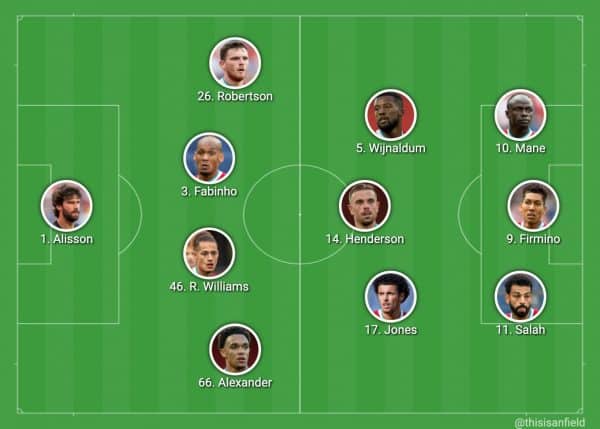 On the other hand, an injection of fresh legs and a ‘surprise’ or two is certainly within the realm of possibility.

With options boosted in midfield and the attack still relatively untouched by injury, Diogo Jota aside (touch wood), this is the ideal time to inject minutes into legs.

Here, Phillips could be favoured ahead of Rhys Williams with his physicality and potentially Southampton in mind in an otherwise unchanged backline.

With Gini Wijnaldum having proved an ever-present, he could be afforded a rest as Milner enters the fold for the first time since the end of November.

Another change in the middle of the park could see Alex Oxlade-Chamberlain handed his first start since the final game of last season at Newcastle, sitting alongside Henderson.

Minamino could be handed another chance to impress and while capable of replacing either Firmino or Mane, it could be the latter this time around: 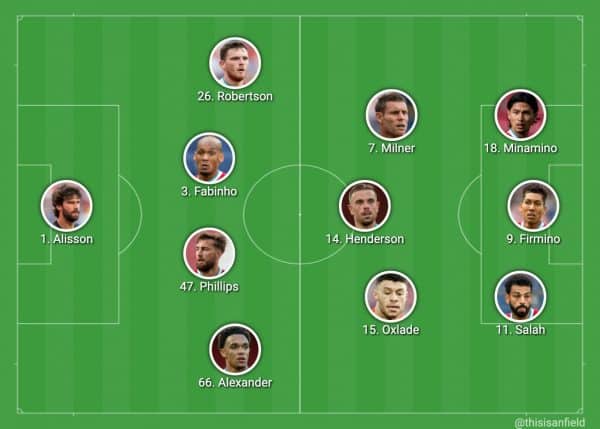 It’s certainly a welcome change to have a number of options up Klopp’s sleeve and there will be no room for a consecutive sub-par performance, but the Reds have never failed to show a response.

Irrespective of the XI, Liverpool should have more than enough to overcome a Newcastle side that has failed to keep a clean sheet in their last 11 home league outings.

There will be no counting eggs before they hatch here and a win is vital before meeting an exciting Southampton outfit on Monday.