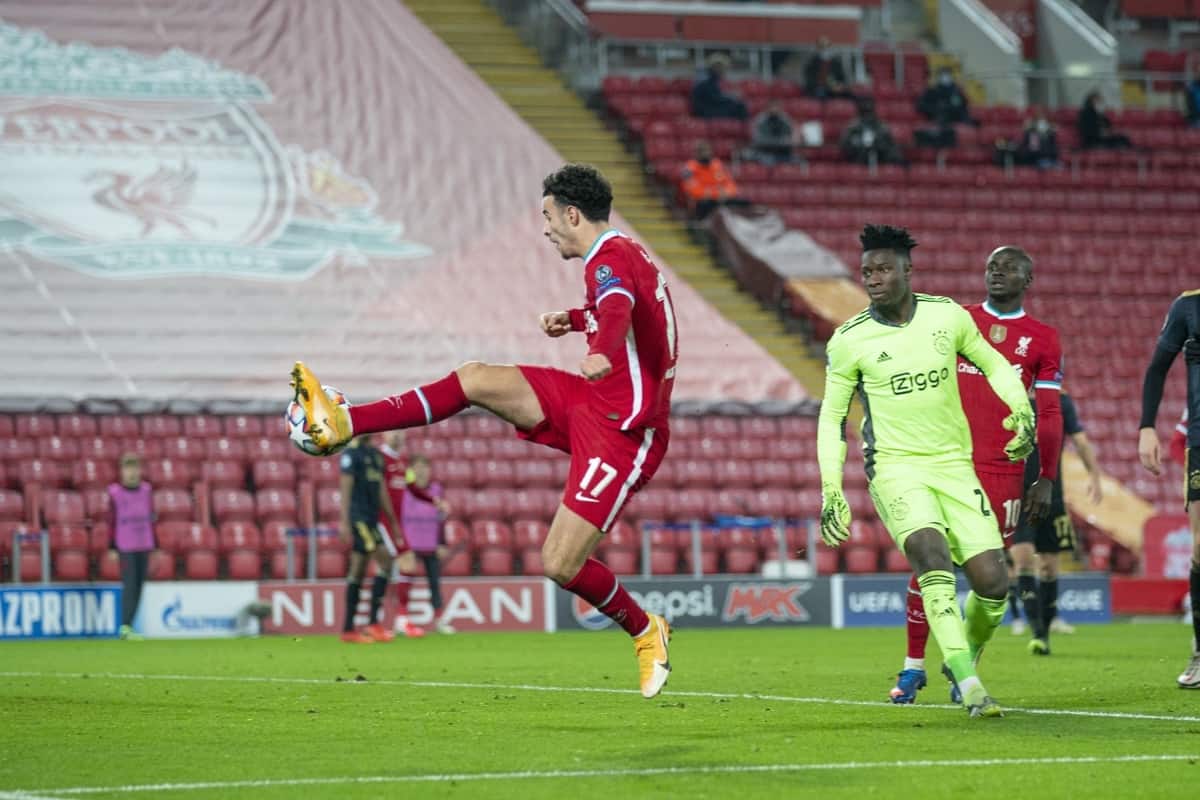 Liverpool qualified for the Champions League knockouts as Group D leaders thanks to a Curtis Jones strike in the 1-0 over Ajax on Tuesday evening.

It was another all-important night for Jurgen Klopp and co. under the lights at Anfield as they were presented another chance to reach the knockout stages with a game to spare.

But they were handed yet another injury blow in the form of Alisson, with the ‘keeper sustaining a hamstring injury at Brighton to cast doubt over his availability over the next two weeks.

While far from ideal amid a long list of injuries, it did present the opportunity for Caoimhin Kelleher to make his Champions League debut and just his fifth appearance for the club – where he went on to impress.

An open early exchange saw Curtis Jones, who was bright throughout, presented with a couple of chances – one which found the upright from outside the box in what was the sole clear cut chance of the half.

A battle in the middle third then ensued for much of the remaining opening half, with the Reds struggling to find the final ball to punish the open spaces left by Ajax to see deadlock remain at the interval.

Things opened up once more in the second 45 with Kelleher increasingly called into action, where his parry midway through the term came just moments before the breakthrough for the Reds.

The ball came from Neco Williams off his weaker foot and an error of misjudgment from Andre Onana saw Jones rewarded for not giving up on the play as he finished it off with the outside of his right boot for his first goal in the Champions League.

A flurry of chances would then arrive for Liverpool as Ajax looked to peg back the deficit, but the final ball would continue to prove problematic and their wayward finishes thankfully went unpunished as Kelleher came up trumps late on with a brilliant save from close range.

The result was one which highlighted the talented youth at Klopp’s disposal and ensures the last group game against Midtjylland is a dead rubber as the Reds qualify for the last 16 as winners of Group D.