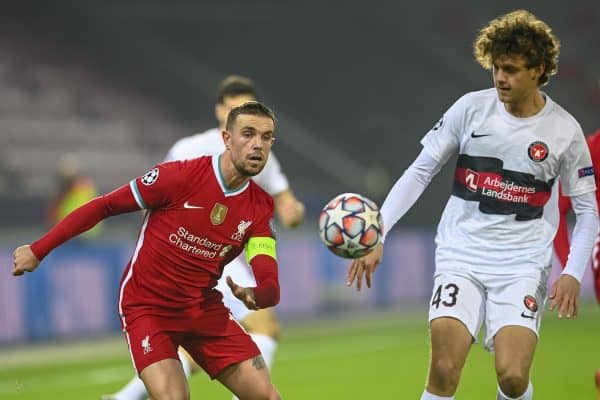 Video: Watch the goals and highlights from Midtjylland 1-1 Liverpool

Liverpool drew 1-1 away to Midtjylland in the Champions League on Wednesday night, in a game that will only be remembered for more VAR confusion.

The Reds faced a dead-rubber contest to finish off their Group D campaign, making the trip to Denmark.

Jurgen Klopp‘s starting lineup certainly suggested he was taking the match seriously, however, even if there were eight changes to the team that beat Wolves 4-0 over the weekend.

Trent Alexander-Arnold, captain on the night, was also joined in the XI by Fabinho, Naby Keita, Diogo Jota and Mohamed Salah, while there was a debut for Leighton Clarkson in midfield.

Liverpool couldn’t have made a better start to proceedings, as Salah capitalised on an error in the first minute, eventually finishing in slightly fortuitous fashion.

It meant the Egyptian became the Reds’ record goalscorer in Champions League history, overtaking Steven Gerrard to lead on his own with 22 goals.

The second half was a far more even affair, with the influential Fabinho‘s withdrawal making Liverpool more susceptible at the back.

Midtjylland won a penalty on the hour mark, with VAR penalising the impressive Caoimhin Kelleher for a foul, following a long and painful offside check.

Alexander Scholz fired home the spot-kick and the visitors threatened to win the game, with Kelleher being a called into action a number of times.

Liverpool had their chances, too, and just as Takumi Minamino thought he has won it in the 89th minute, Sadio Mane was adjudged to have handled the ball in the leadup.

It was a moment that summed up a frustrating night, but the Reds are still safely into the last 16, which is all that matters.

Liverpool now have a four-day break until their next game, with the Premier League champions visiting Fulham on Sunday afternoon.